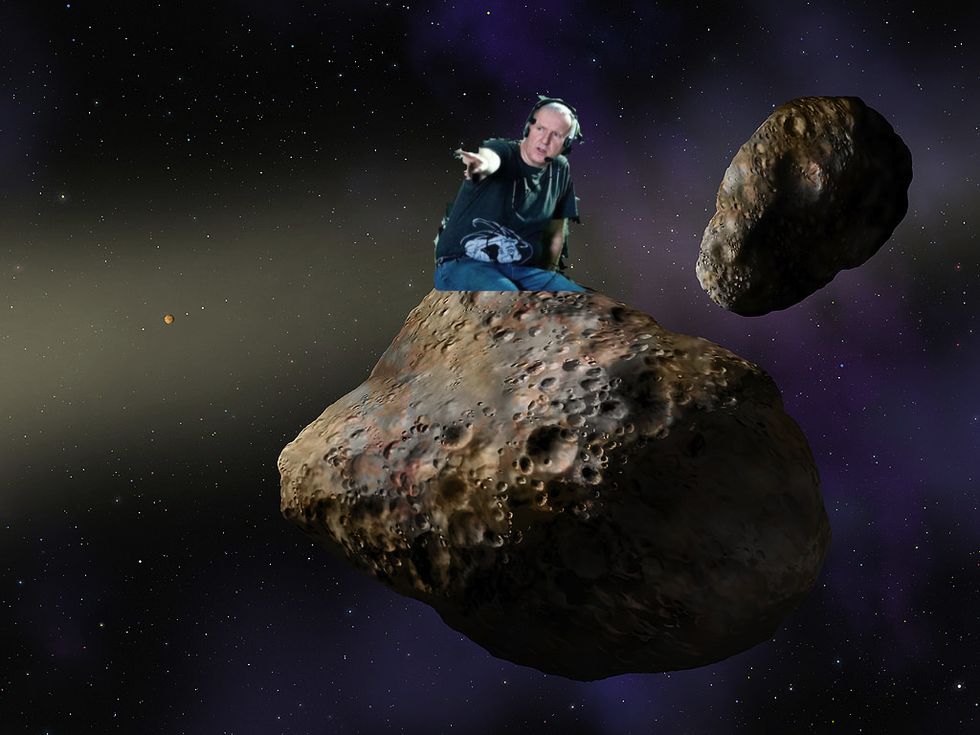 You would think that if The Liberals decided to go off to outer space to do their thing, maybe accidentally never come back, get sucked down a liberal wormhole, Fox News would be happy, but you would be wrong. Fox News reports, via Space.com, that there is a new company headed by people including Google execs Eric Schmidt and Larry Page, as well as Titantic inventor James Cameron, called Planetary Resources, which just sounds socialist, and the company intends to take its billions and go off to some asteroid and mine it for minerals, because it is over us asking China for things. The minerals will apparently add "trillions to the GDP." One asteroid contains more minerals than this one mineral company on Earth, Platinum Group Metals, has mined in all of history. But that doesn't matter, this all gets Fox News's knickers in a twist, because, after all, "to whom do those trillions belong — the company, or everyone?" Oh, you.

Continues the "reporter" of this article, who may be Newt Gingrich('s ghostwriter):

Does a private company have a right to stake claim to an asteroid, or are celestial bodies such as the moon, planets and asteroids the communal property of all Earthlings?

"Earthlings." That is the logical first question in a situation like this, yes. Fortunately the article answers its own questions, and reminds us that there is a law that may prevent dot-com billionaires and egomaniacal undersea explorers from profiting off rocks hurtling through space.

The most pertinent piece of law is the Outer Space Treaty (OST), an agreement signed or ratified by all spacefaring nations in 1967, which established, among other things, that no nation may claim sovereignty over space, the moon or celestial bodies.

Then the article author found another person to ask, who reads the law quite differently. Art Dula (sounds like a socialist), a space law professor at the University of Houston, thinks Planetary Resources can definitely go ahead and mine that asteroid. Why? Because we have better things to worry about. Oh, but also, because, "The 1967 Outer Space Treaty specifically permits the 'use' of outer space by nongovernmental entities. There is no suggestion in the treaty that commercial or business use would be prohibited."

So despite the fact that half the sources quoted in this article tend to believe the law leaves asteroids to "the people" as opposed to the states or the federal government, per the 10th Amendment, Fox News decided to "syndicate" the article from Space.com (cut and paste it legally and then go relax in a lawn chair), but first swap out the slightly less hair-raising headline and go with, 'Liberals Push Socialism In Outer Space,' which also conveniently means that if people don't read the article, they can still vote it as "OBNOXIOUS" in the little "Fox Nation Thinks This Post Is..." area, which they have. [Fox News/Sacramento Bee]