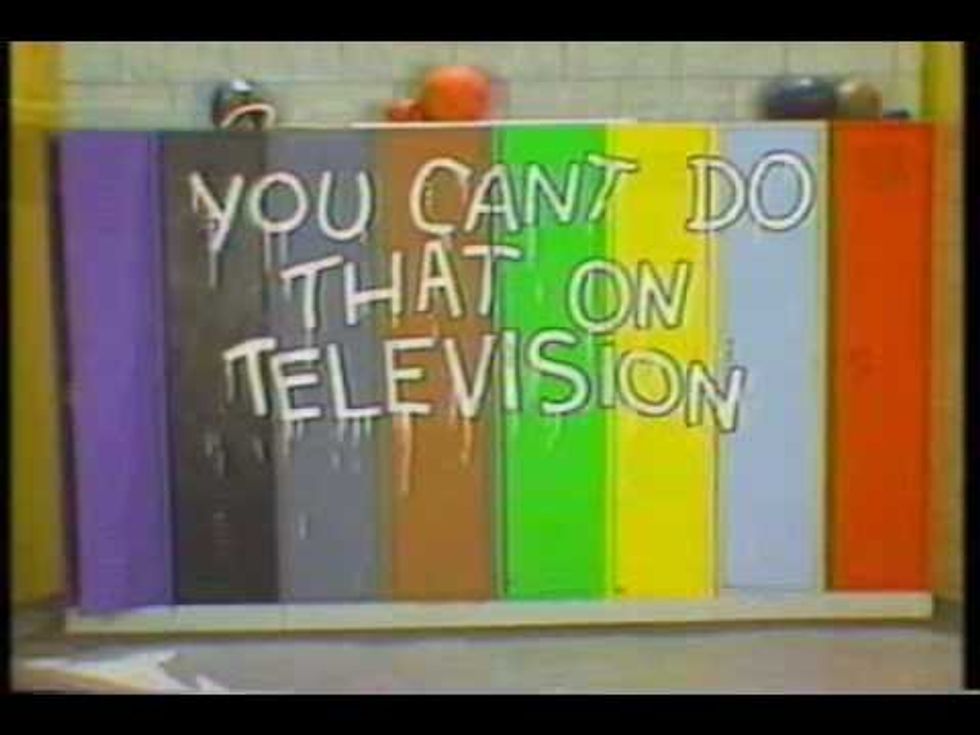 After impatiently demanding, 29 hours a day, that the president nut up and call the shootings in San Bernardino last week TERRORISM, Fox News's ew nasty nighttime ejaculations came true. So did Obama's Sunday night address from the Oval Office at long last make the Fox folks feel satiated and in need of a cigarette? Hells no, what are you, a stupid?

The president may have said the T-word, but on Monday, at Fox "Business" Network, Fox News Strategic Analyst Lt. Col. Ralph Peters explained why -- contrary to all prior claims by Fox -- simply saying the T-word does not mean we're half-way there to winning the War on Terror, with our words:

Mr. President we’re not afraid. We’re angry, we’re pissed off, we’re furious! We want you to react, we want you to do something! You’re afraid! This guy is such a total pussy, it’s stunning. And we the people, the American people --

Waiiiiiit a minute. Did this guy just call "Mr. President" a pussy? Rewind. Why yes, yes he did. Just wanted to confirm that. Go on, Strategic Analyst Guy:

Blah blah, you get the idea. You may not have gotten the memo that the president is droning American police departments to death, but that's why Fox News is here to keep you informed.

I can tell you’re super angry and I asked you what your reaction was, but you can’t use language like that on the program, I’m sorry.

We assume Varney isn't admonishing Fox's analyst for throwing around the word "thugs" so casually, nor for his absurd and not true ACTUALLY accusation that the president is waging a more serious war against our nation's police than against ISIS, so, by the process of elimination, we guess the problem is saying the P-word on television. Not because it's uncouth to call the president a pussy, but, you know, children's comatose grandparents are out there possibly watching this family entertainment, so, sorry, but please find a more G-rated insult for the president, pal.

Lest you think this is an exception to the rule and that the rest of Fox is happy happy joy joy that Obama said the T-word, shut the front door, because yeah right, as IF. The "Fox & Friends" ménage à trois over on the Sofa of Stupid aren't about to express any gratitude that the president is FINALLY taking this terror stuff seriously enough to say TERRORISM for the first time ever, if you're not counting the one million and seven other times he has already said it, which they are not, obviously. Sure the president said the T-word, but as Fox "Reporter" Kristin Fisher helpfully emphasized, "In his entire remarks, he never once used the words 'radical Islamic terrorism.'" Take it away, Fox & Friends Brain Trust:

STEVE DOOCY: That's a step in the right direction, but then again he had to because his FBI director said it was terrorism, two days earlier.

HASSELBECK: It's a sad state when he gets credit for actually using the word that should have been used all along.

DOOCY: He could have, he should have just added to it.

HASSELBECK: Just another step forward would be great.

Ugh, Obama, what a family-friendly-euphemism-for-pussy that guy is, right? He only calls an act of terror an act of terror when the people in charge of investigating that tell him it is an act of terror. And not a second before! Which is absurd, because Fox News was able to conclude last week's incident was an act of terrorism long before those slow-poke FBI morons sussed out that's what it was, all right you betcha. If Obama were a real president, he'd call all acts of violence Radical Islamic Terrorism, or better still, hand the investigation right over to the geniuses at Fox News. They'd have this whole case cracked, like, months ago.

Sure, on the downside, if Fox were in charge, its various blondes and non-blondes might have accidentally arrested the president of Turkey as the "second shooter." It might have, upon Sean Hannity's suggestion, rounded up all the Syrian refugees who had nothing whatsoever to do with the incident, but isn't it all sort of the same, really, when you think about it?

The point is, Fox News and its analysts know what's going on, even if President Pussy doesn't, or will only say so when forced into it by the FBI, so if we inadvertently make false accusations against innocent people or use our pants-crapping as a justification for discrimination and maybe even dropping some bombs on whoever, ah well, that's the price of freedom. No doubt the Fox Business Network would call that a bargain at twice the price.