Fred Phelps Is In Heaven Now, Calling The Apostles Faggots 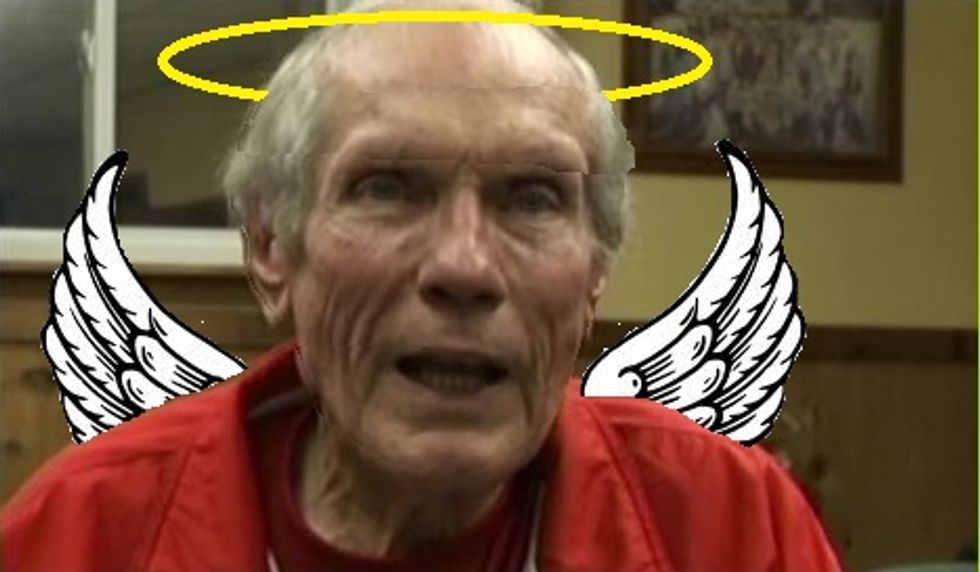 Wait, you are saying, how could the world's most out-and-proud bigot, who purposely inflicted emotional pain on the innocent,be in HEAVEN? Wonket, this must be that "satire" or "snark" of which we've heard so much?

Sorry dudes, but according to our junior high nuns, if you act according to your sincere beliefs, you are not a sinner, and you get to enjoy eternal bliss at the feet of the Father, whether you are Catholic, Hindoo, Godless atheist, or Fred Phelps. And if Fred Phelps did anything, it was act according to his sincere beliefs. Since our nuns -- who showed us Romero, told us sex was a beautiful gift from a loving God, and were general all-around-communists who were right about everything -- were obviously (like we just said) right about everything, what does that mean for the "Reverend" Fred Phelps's enjoyment of eternal love? Let's fagsplore.

You know that Twilight Zone where the guy gets his wish, a world without anyone bothering him so he can just read and read and read to his heart's content without, like, his wife interrupting him for sex and stuff? But then he BREAKS HIS GLASSES? Or remember that other one, where the guy gets all the fancy beautiful ladies and always wins at gambling but it turns out that is HELL instead of HEAVEN? That is probably about what is going on here. There is Fred Phelps, in Heaven, but he sees A BUNCH OF FAGGOTS THERE TOO, so heaven turns into Fred Phelps's personal hell. Oh God, what a funny trickster you are!

Who are some homosexxicans Fred Phelps will meet in Heaven?