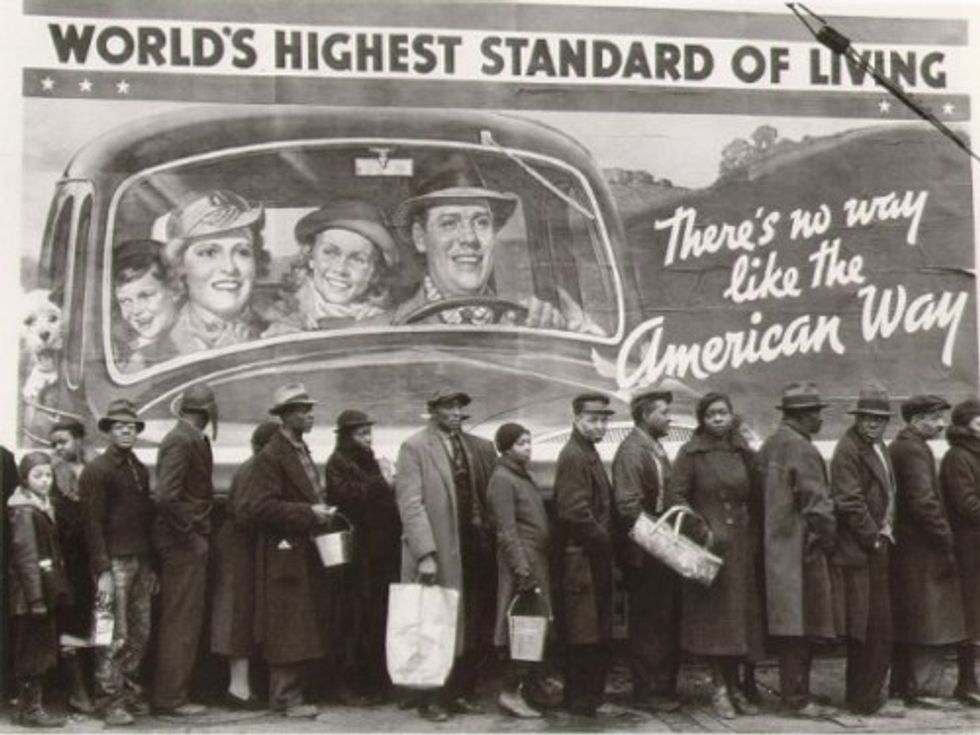 As we all know, Jesusdoesn't want big government feeding people, because some of the hungry might be bad people, and also because it gets in the way of people expressing their love for Jesus by volunteering on their own to feed people. And as anyone knows, we don't need no stinkin' government, because private individuals are always best at addressing local problems, with their can-do spirit and such. Like in Lafayette, Indiana, where Cherrie Buckley, owner of the Buttery Shelf Eatery, served free meals to all comers every Thursday, helping out the less fortunate and easing the burden on local food banks as well. And she didn't ask for any praise or recognition, just wanted to do her part to help her community with individual initiative and a spirit of giving. And the free market saw this act of kindness and spoke clearly: other nearby businesses told Buckley to get rid of those smelly unsightly poor people, because they were terrible for business. And so Buttery Shelf announced in September that it was ending the free Thursday lunches, because while fighting hunger is nice, fighting bullies with lawyers is a real drag.

The leader of the fight for a nicer-looking retail landscape is Jerry Kalal, owner of K. Dees Coffee and Roasting Co., who does not care for these unsightly poors. He claims that the free lunches attracted the wrong sort, and that they scared away customers to the tune of $500-$800 a week in lost sales.

“I said, ‘You do this little soup kitchen, but you’re closing down all the other businesses,’ ” Kalal said. “I’m not against helping people, but when it hurts my building and other businesses, I go off” ...

“You’d have 50 or 60 people standing outside the Buttery Shelf, spitting, swearing, open alcohol use, clogging the sidewalks,” Kalal said.

He also proposed a free-market solution to the problem, telling Lafayette Mayor Tony Roswarski "if I’ve got to buy the building myself (to shut it down), I would." For all the suggestions that the people lined up for free meals were some kind of mob, the police, who "fielded repeated complaints about Buttery Shelf patrons" (from whom, we wonder?), never found any crimes more severe than lines of people blocking traffic. Also, someone (again, who? We cannot possibly imagine!) removed the trash containers from outside the Buttery Shelf.

Another business owner, Makenzie Kus of Something Blue Bakery, said that she witnessed some bad behavior, but didn't know whether she'd actually lost business:

There was a crowd that used a lot of foul language there,” Kus said. “I watched one guy just cold-cock another guy right in the face. I know it’s not like that all the time, but I definitely see why businesses were uncomfortable with it.”

Other nearby businesses doubted that the Thursday patrons were quite as bad as Kalal made out; an antique store owner said that as far as he could tell, Kalal was bullying Buckley. A police captain said that the department had received multiple calls -- one from the coffee shop's business line and three anonymous -- including a false claim that

"there were about 20 people behind the Buttery Shelf doing drugs, and an officer was already on scene watching them,” Downard said. “They were just standing there waiting for the place to open.

None of the police visits were even serious enough to generate an actual report. But still, you know, unsightly poor people are mostly criminals and troublemakers, so thank goodness that threat to public order has been shut down.

Since the news broke, it may be worth noting that the Facebook page for K. Dees Coffee has been swamped with negative comments, so once again, The Internet Is Not Pleased. Maybe Mr. Kalal can get some love from wingnut websites for his brave campaign against the poors.

[Journal and Courier via ThinkProgress]