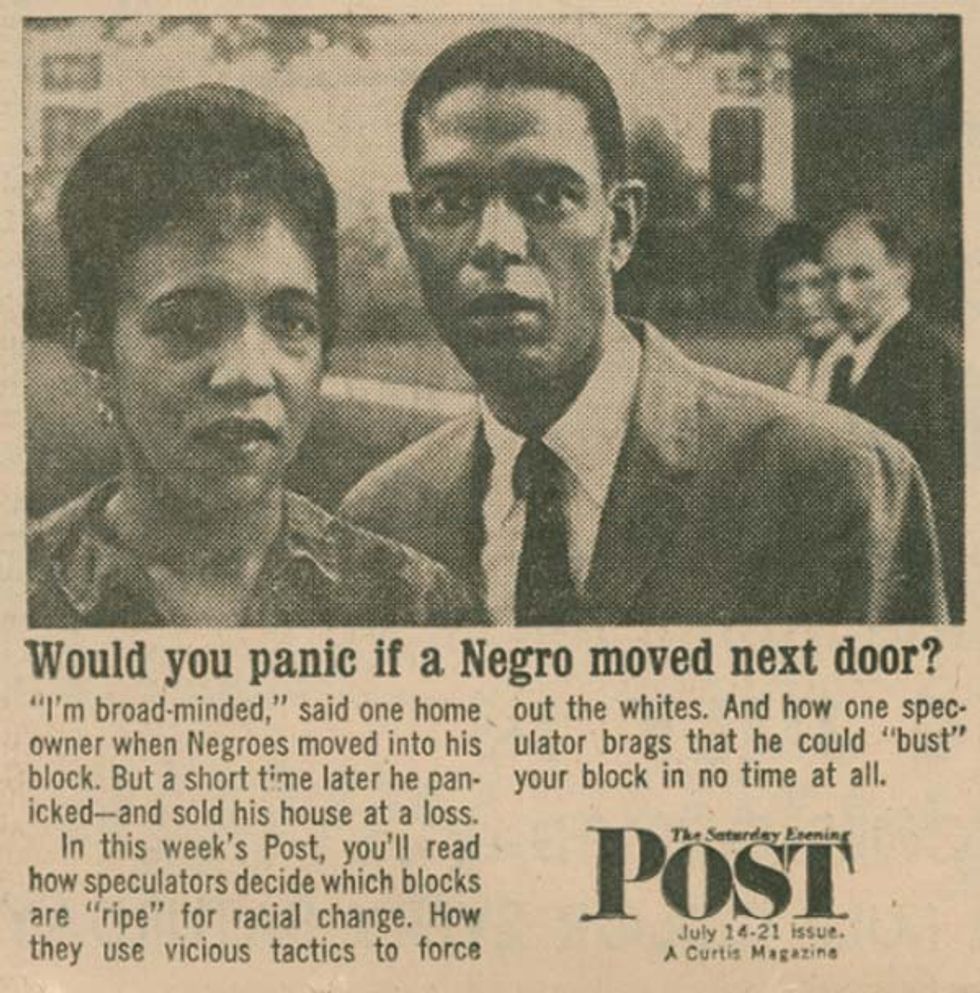 You never know what you'll find at the library book sale

When she went to the Boise Public Library's annual book sale a few weeks ago, Noted Political Pundit Our Girlfriend brought home a terrific little time capsule of the National Conversation on Race: a copy of the April 4, 1959, Saturday Evening Post with the teaser headline, "Neighborhood Crisis: WHEN A NEGRO MOVES NEXT DOOR." For all the scary implications of that "Neighborhood crisis" stuff, the article itself, by Ellsworth E. Rosen with Arnold Nicholson, is actually written in a weirdly 1950s moderate-liberal tone, assuming that the reader is a good decent (and definitely white) person who'd never stoop to race prejudice, but may not actually know any Negroes personally. It's downright bizarre at times in its attempts to reassure nervous whites they have nothing to fear about property values if a Negro family should move into the reader's own neighborhood. Just look at the article's opening:

Isn't it reassuring to know that there are plenty of good Negroes who are just like us? The piece can be downright jarring in its attempts to reassure nervous white readers they needn't be afraid of black neighbors, as in this bit about a meeting of the local neighborhood association formed by white and black families to keep the real-estate "block-busters"* (realtors who try to depress housing values by getting white families to panic-sell, then turn around and sell the houses to black families at a higher price) at bay:

There's even a photo of Mr. Otho Pinkett, the articulate Negro fellow urging solidarity against the machinations of real estate speculators:

Original caption: Otho Pinkett (left) of the Ashburton Area Association reassures fellow residents. 'To protect your way of life,' he says, 'continue living in your own home.'

Beyond all the bending-over backwards to emphasize that Negro families aren't to be feared, there's another element in the story that really surprised us, and left us feeling strangely nostalgic: For all his moments of condescension to his Negro neighbors, Rosen and his neighbors, black and white, have a sense of community, and of the power of community action against the big bad real-estate block-busters, that seems as distant in time as the stories of white flight and redlining. This isn't just an article about race, it's an article about nice middle-class homeowners of both races trying to keep their neighborhoods from being taken apart by rapacious real-estate jerks, and succeeding by having neighborhood meetings. One of the block-busters' techniques to scare white families into selling was to put "Sold" signs on houses that hadn't actually sold, and then to urge nearby white homeowners to sell out before the whole neighborhood went black and prices collapsed altogether. So the neighborhood associations fought back by convincing the city to ban "Sold" signs, and the block-busting was stopped for a while at least.

Then there's the unashamed class bias in the piece, which very consciously rejects any notion of mixed-income housing, thank you very much -- renters, of any race, are portrayed as a greater threat to neighborhood stability than Negroes -- or at least, middle-class, professional Negroes:

Low-income whites and rapacious landlords have been more of an economic threat than Negroes in many blocks. Seven of the Bolton Hill properties have been improved and sold, and eleven are operated for rentals [...]

[N]eighborhoods do not have to deteriorate when Negroes move in -- if panic does not take hold. Dozens of families who are remaining can testify to this. But if the block-busters succeed, speculators sooner or later convert houses to multifamily rental units or open the door to downgrading by placing properties in eager but ill-equipped hands. The garbage collections that were sufficient for a single-family area become inadequate for the greatly increased number of families. The neighborhood ceases to oppose zoning changes that bring service stations, machine shops and other commercial establishments. Change and violations alike go unchecked under the city's loosely written and poorly enforced zoning laws.

It's a pretty amazing document about social and economic anxiety, written almost a decade before the Fair Housing Act, and still optimistic about the possibilities of -- dare we say it -- community organizing. Yes, there's racial tension, but the Baltimore of this 1959 magazine article isn't somewhere people bowled alone, and that sense of community, the confidence that neighborhood-level democracy can bring people together, is almost as quaint as the Ronald Reagan ad for Union Pacific's Domeliner passenger trains opposite one page of the article.

Also, for your "The More Things Change" file, the magazine includes this teaser for the next week's issue:

Sure hope the people of the future got that problem fixed better than they did all the racial tensions.

* The featured image, "Would you panic if a Negro moved next door?" is actually a promotion for a 1962 article, "Confessions of A Block-Buster," which is worth a read, too! And to think, that was published around the same time a young Donald Trump was learning from his dad how to avoid renting to blacks.