Fun With Christianists: Things You Can Learn in a Christian 'World History & Cultures' Textbook (Part 2) 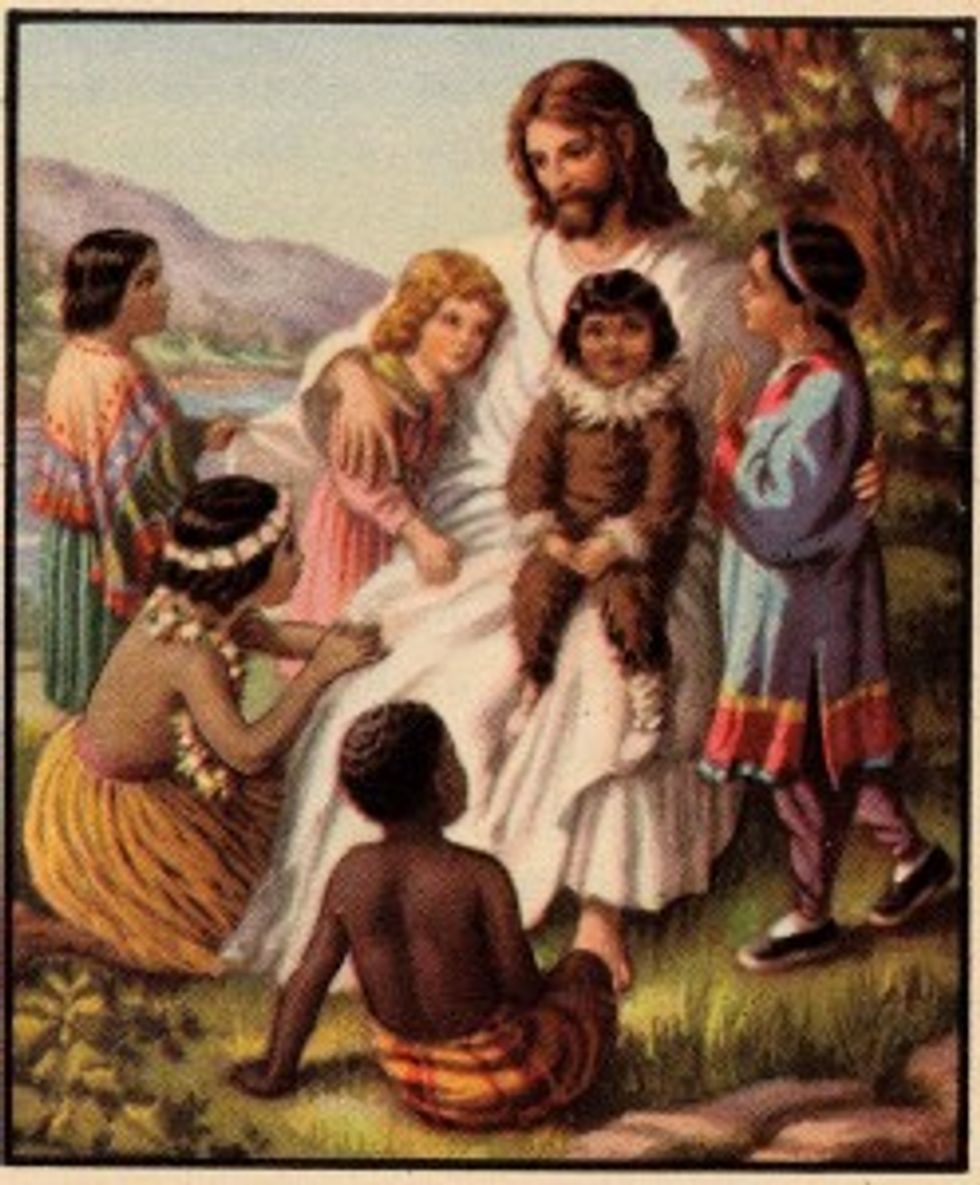 Welcome back to our excitingSunday series of visits to the apocalyptic fever-dream that is Christianist America, as revealed through what kids learn in Christian-oriented textbooks. This week, we continue to loot and pillage World History and Cultures In Christian Perspective, 2nd Ed. , a 10th-grade history (we do not say "social studies!") text published in 1997. (As we noted last time, an updated edition was published in 2010; we are looking on ebay, because why would we give money to the publisher?).

If the World Isn't 6000 Years Old, We Can't Believe Anything

The best way to counter public schools' subtle secular indoctrination, the Christian education movement reasons, is to douse Christian boys and girls with a bucket of unsubtle religious indoctrination. So it really should be no surprise that the second page of a world history book would include a screed on the dangers of science:

The broad acceptance of evolution has led more directly, of course, to such other evils as antibiotics, gene therapy, and a basic understanding of biology, but why quibble? As Great Thinker Ben Stein said, "Love of God and compassion and empathy leads you to a very glorious place, and science leads you to killing people."

The need to find support for the literal truth of Genesis occasionally leads Creationists to make claims that sound like a college sophomore earnestly trying to prove that Pink Floyd lyrics actually mean something. For instance, here's an explication of the Top Sekrit Bible Truth Hidden in Chinese language:

Yes, they are completely serious about that. Their proof for ancient Chinese knowledge of Noah's Flood? The character for "boat" is made up of particles meaning "vessel," "eight," and "mouth." Needless to say, these claims have been mocked, both snarkily and in far more detail than you want to bother with (but there's the link anyway).

An obsession with Scriptural Correctness is one major theme of World History; another is that all of human history reflects a literal battle between God and Satan. So in this book, the persecution of the early Christian church wasn't merely a matter of Roman colonial politics. Rather,

There's a LOT of fun details about martyrdom! And as Christianity spread through Europe, it didn't merely incorporate the folk beliefs of local populations into church paractices. That sort of explanation may fly with today's evolution-crazed "anthropologists," but here's the real skinny:

And yes, that's the cue to bring on the Big Bad for the chapters covering Medieval Europe through the Reformation and beyond. These guys are serious about proving that, as long-time Wonketteer Chet Kincaid puts it, the Church of Rome "violated the terms of the licensing agreement" that came with God's software. (And it's always "Church of Rome" or "Roman church" -- The term "Roman Catholic Church" appears maybe twice in the entire text. This may be similar to the way some conservatives say 'Democrat Party.") You can feel the centuries of anti-papal butthurt behind this description of the 13th-Century Inquisition:

Oddly, despite this scorn toward the hypocrisy of the Inquisitors, and the textbook's clear disgust at the Crusades, the lesson is not that excessize zeal can lead to horrors, but rather that the Roman Church's deviations from self-evident Biblical Truth did all that. Protestants just don't do that sort of thing. In fact, the outcome of the Crusades, the editors suggest, was pretty wicked 4th-dimensional chess on God's part:

So it all worked out, you see! The bloodthirstiness of the Inquisition and the Crusades was a Romish perversion of Christianity, so please do not blame those horrors on Christianity, OK? By the time we get to the section on the colonization on Africa, those worries about committing atrorities in the name of Christ are gone, and we simply learn that some Europeans (the bad ones) saw Africans as "nothing more than a source of cheap labor" while others (the good ones) "saw Africa as a land needing the light of the gospel and the civilizing influence of Western culture" (p. 371). Mistah Irony, he dead.

Knowledge is Good (As long as it's Good Knowledge)

There is a whole lot of history and theology between the Middle Ages and the Reformation, but none of it is funny, so the hell with it. Once Luther freed Europe from Romish bondage, though, everything got better, and so we get amazing observations like this:

Apparently, among these foundational truths are that the Earth is flat, that bats are a kind of bird, that rabbits are ruminants, that the Earth existed before the Sun did, and that the Earth is covered with a firmament in which God set floodgates to let out rain and snow, and when necessary to drown the world.

However pariseworthy exploring God's natural laws might be, World History gives special credit to Sir Isaac Newton for recognizing that science doesn't need to go poking its big empirical nose in some places:

And yet, foolish scientists actually went and came up with explanations for how the universe came to be! Didn't they respect Newton at all?

Next Week: The Modern World; or, Finally Some Interesting Stuff Happens