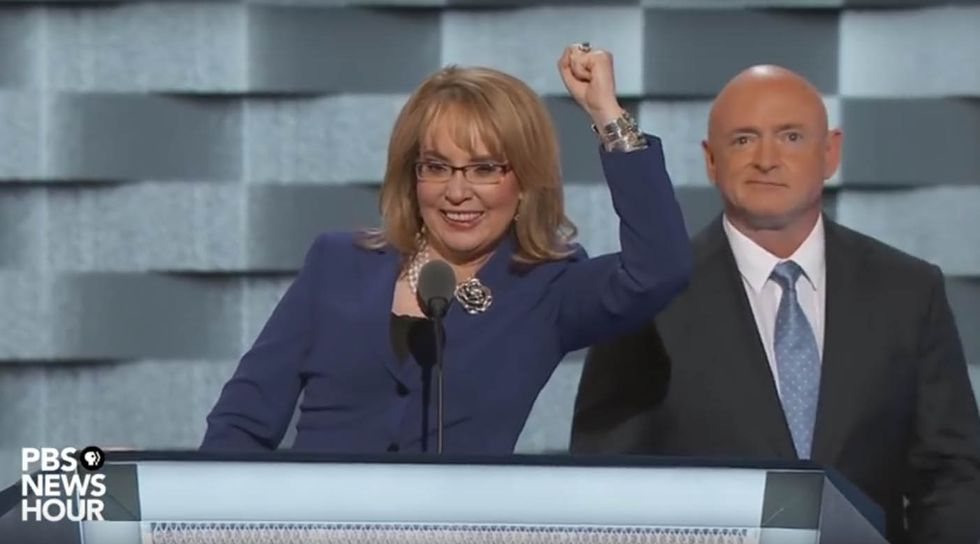 We were JUST telling you what a pussy Rep. Louie Gohmert (R-Dumbstupid) was being, saying he just can't possibly do town halls with his constituents, because of how they're full of violent paid protester liberals who will blow everybody's face off with a gun, like they've been doing for weeks now. Apparently this is a thing! Gohmert, who has just as many functioning brain cells as you'd think based on how he looks and talks, even went so far as to cite former Rep. Gabby Giffords (D-Badass), who actually did get shot in the head during an event with constituents, and lived to tell the tale.

Surely Giffords would agree with Gohmert, that it's probably best to stay inside with the shades drawn, lest a bunch of angry voters get too close, HAHAHA JUST KIDDIN'. Gabby Giffords ain't got time for this shit, and she has a message for her former colleagues on the other side of the aisle, and it is MAN UP, PUSSWADS, AND DO SOME GODDAMN TOWN HALLS.

This press release, it is beautiful, as you will see if you click and embiggen it:

The statement from Giffords, lovingly transcribed:

Town halls and countless constituent meetings were a hallmark of my tenure in Congress. It's how I was able to serve the people of southern Arizona. I believed that listening to my constituents was the most basic and core tenet of the job I was hired to do.

I was shot on a Saturday morning. By Monday morning my offices were open to the public. Ron Barber -- at my side that Saturday, who was shot multiple times, then elected in my stead -- held town halls. It's what the people deserve in a representative.

In the past year, campaigning for gun safety, I have held over 50 public events.

Many of the members of Congress who are refusing to hold town halls and listen to their constituents' concerns are the very same politicians that have opposed commonsense gun violence prevention policies and have allowed the Washington gun lobby to threaten the safety of law enforcement and everyday citizens in our schools, businesses, places of worship, airports, and movie theaters.

To the politicians who have abandoned their civic obligations, I say this. Face your constituents. Hold town halls.

And the people said, "AMEN!" And then they called the GOP a bunch of pussies one million more times, just for good measure.

And all the other YA BURNT! pictures you can think of. Enjoy your open thread, goodbye!

[h/t AM with Joy Reid on Tweeter]

Wonkette is reader-supported by sexxxy Viewers Like You, so please give us dollars!