Gas May Be Cheaper, But Congressional Jerk Babies Refuse To Pay For Roads 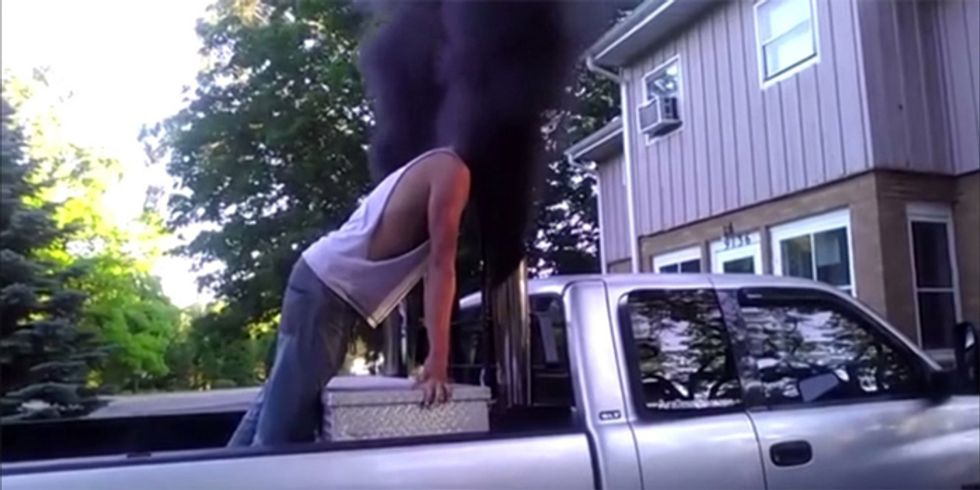 So now that President Michele Bachmann has fulfilled her campaign promise to bring gas prices down to $2 a gallon, this would be an excellent time to tack a few pennies onto the gas tax to help fix up our crumbling freeways and collapsing bridges, right? Hahaha, what are you, a communist? There is never a good time to actually pay for stuff! There is no way that the Republican majority in Congress would ever dream of paying for stuff we need, because 1) we don't really need it, 2) taxes are communistical, public roads doubly so, and 3) someday there will be an election where someone will say you voted to raise taxes.

Even so, there are some wild-eyed radicals who think that "paying for stuff" is part of Congress's job, and so they are trying to raise the gas tax a skosh:

“If something like this is going to be done, now is the time to do it,” said Bob Corker, a Republican senator, who noted that gas prices in his home state of Tennessee fell below $2 a gallon this month. Senator Corker and Senator Chris Murphy, a Democrat from Connecticut, unveiled a proposal in June to raise the gas tax by 12 cents a gallon over the next two years and then index further increases to inflation.

And of course we all remember how that easily passed, right?

But do we really need gas taxes anyway? After all, gas taxes just went up in 1993, and there's no reason to rush in after a mere 20 years and slam another tax increase on top of that! Oh, sure, there are some Prius-driving wimps who think that paying for highways and bridges and tunnels is something a government is supposed to do, but again, those people don't have to face re-election, so gasoline is still taxed at the same rate it was back then, even though if the tax had kept up with inflation, it would now be about 30 cents a gallon. Again, not that the federal Highway Trust Fund needs any money:

A result is that the trust fund is facing an estimated $160 billion deficit over the next 10 years. When efforts at a long-term fix failed over the summer, Congress approved a last-minute patch that avoided throwing out of a job as many as 700,000 people working on transportation projects around the country. But that back-from-the-brink agreement, which funneled $11 billion to the fund, covers the shortfall only through May.

For some conservative members of Congress, bankruptcy of the highway fund is just what they want, arguing that state and local governments should bear principal responsibility for highways and bridges.

Just think, the states could do as great a job with bridge safety as, let's say, Mississippi has done with public education! And if a few bridges collapse from time to time, the free market will fix it by encouraging people to move elsewhere or at least drive while wearing waders. [contextly_sidebar id="t0BywiDBVLTe6zFiA3y35cxjENKxaNuu"]Besides, if it's not a federal tax, it isn't a tax at all, as we all know from discussions of the 47 percent of people who don't pay federal income taxes, and are therefore freeloaders.

Plus, ever since former Energy Secretary Steven Chu said in 2008 that it might be a good idea for American gas prices to be similar to those in Europe (an idea that was never Obama administration policy, which means the right cites it at every opportunity), supporting gasoline taxes means you want gas to cost $10 a gallon, and you also think global warming is real, and for that matter UN Agenda 21 bike paths or some shit, so that's just a non-starter. And finally, increasing the gas tax would mean highway construction jobs, and we wouldn't want construction workers to get caught in the cycle of dependency that comes from building and maintaining federally-funded roads.

So how are we going to keep our roads from falling apart when the current funding authorization expires in May? Stop asking questions like that, it makes you sound like a communist. We'll just kick that can down the road again and deal with it later, assuming it isn't swallowed by a pothole the size of Cleveland.