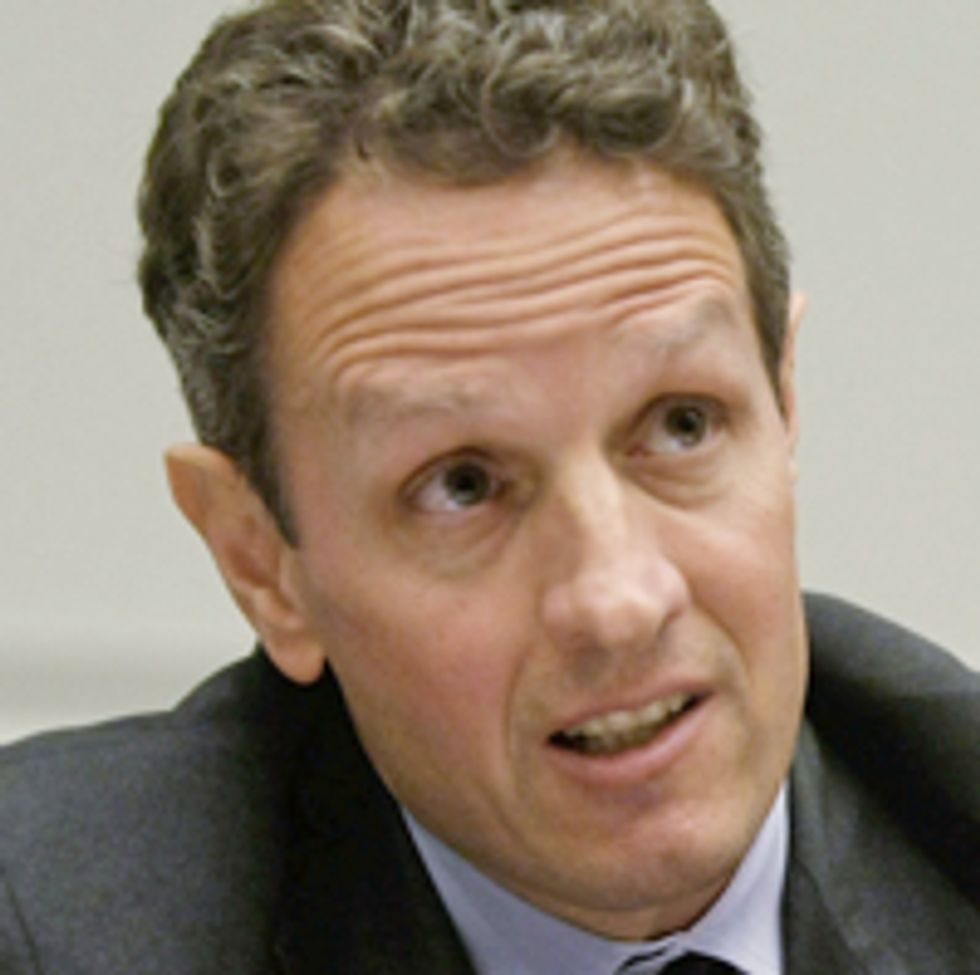 TheWashington Post has an extraordinary article today about why Tim Geithner's press conference to unveil the administration's bank rescue plan last week seemed to... suck? Is that the word? Well it wasn't the plan, so much -- as best we understood this vague monstrosity, it was something like, "Public private money tax blah blah uhhh force lending guarantee toxic gas blah blah blah uhhhhh TWO TRILLION DOLLARS," so fair enough -- so much as it was Geithner himself, who appeared to have no confidence in himself, the plan, or America. The Post reports that this is probably because he had ditched a different plan a few days earlier, and what you heard at the press conference was just some unreadable gibberish he threw together on the john a few minutes before taking the podium.

Just days before Treasury Secretary Timothy F. Geithner was scheduled to lay out his much-anticipated plan to deal with the toxic assets imperiling the financial system, he and his team made a sudden about-face.

According to several sources involved in the deliberations, Geithner had come to the conclusion that the strategies he and his team had spent weeks working on were too expensive, too complex and too risky for taxpayers.

They needed an alternative and found it in a previously considered initiative to pair private investments and public loans to try to buy the risky assets and take them off the books of banks. There was one problem: They didn't have enough time to work out many details or consult with others before the plan was supposed to be unveiled.

Meanwhile, the sources said, Obama's senior economic advisers were hobbled in crafting the plan by a shortage of personnel. To date, the president has not nominated any assistant secretaries or undersecretaries at the Treasury, and the handful of mid-level staffers who have started work were still finding their offices and getting their building passes and BlackBerrys.

The Obama people probably had orders to leak this stuff to the Post as a way of telling Washington and the public, "just forget that thing Geithner did last week -- he had no staff and was going nuts getting confirmed, right? -- and in a few weeks we'll start over with a well developed, confident and far-reaching new plan to destroy America."

Geithner. We do not trust this guy very much. And we definitely don't trust his little friend, Larry Summers, always sneaking, sneaking. These two are best friends with every leading asshole on Wall Street. Coincidentally, the New York Times has a cozy profile of Summers this morning in which both he and Geithner play down any notion that they're waging "turf wars" against each other. This is not the first time that these imaginary Summers-Geithner Intergalactic Wars have been treated with breathtakingly unnecessary detail. And yet we do not hear quite enough about what may be the actual "turf wars," with the Geithner-Summers team on one side and happiness on the other.

In a World Not Wholly Uncooperative, Obama's Top Economist Makes Do [NYT]