Genius Orange County Law School Prof Explains That Prop 8 Is Still In Effect, Up Is Down And Black Is White 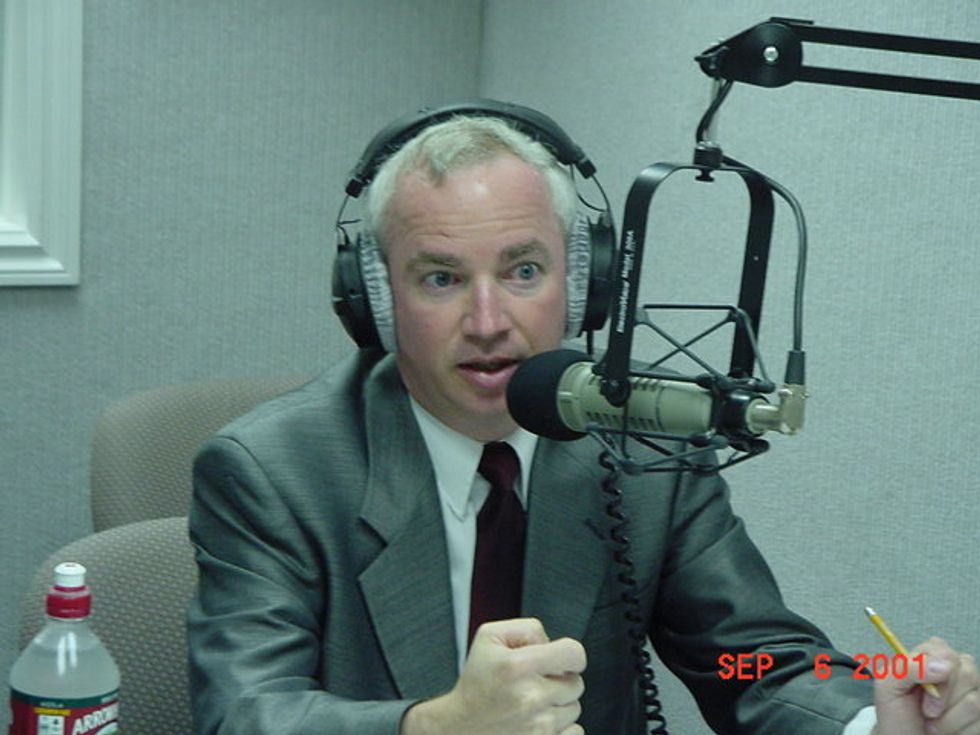 There is so much actual news happening, you guys. We are filled to the gills with actual news and it is killing us. We need some breathing room to find new ways to snark and we really really need some time to develop more swear-y synonyms to describe people who are assholes. So -- time to take a step away from Serious News and make fun of this what-the-fuck law professor John Eastman from Orange County, California, that is going to explain to us all that the Supremes decision yesterday means Prop 8 stands and no one can get gay married nyah nyah nyah:

Here is his reasoning: in DOMA, the Supremes ruled federal benefits cannot be withheld from same-sex couples in states that allow such unions. The court did not address the constitutionality of bans on gay marriage, leaving that question up to each state.

California voters in 2008 banned same-sex marriages with the passage of Prop 8, so the DOMA ruling goes at the heart of the "legitimacy" of U.S. District Judge Vaughn Walker's decree claiming the voter initiative was unconstitutional, according to Eastman.

In other words, DOMA trumps Walker, in the controversial professor's view.

That is a lot of words we had to blockquote, you guys, and we still do not understand this logic even a tiny little bit. Mebbe it is that since California voters decided to hate on the gays in 2008, no other court case following that matters because ipso facto QED res ipsa loquitur also too?? Sure, we're gonna go with that. Screw every other piece of legal analysis that explains that Prop 8 is now scattered asunder to the four winds and screw every county clerk in California that is gearing up for the big gay wedding rush, 'cause this guy has got it right for sure.

We've already informed the Editrix that we are moving to California, where it is sunny forever days out of 365 days per year so we can take classes from this guy because he sounds AMAZING. Longtime readers and new friends will be unsurprised to learn that this guy teaches at a Christian law school and made a wildly unsuccessful bid to be California's Attorney General and is on the board of the National Organization for Marriage AND is an IRS truther! He clerked for Justice Thomas! He appears on the Huge Hugh Huey Hewitt radio show! Seriously, we love this guy. Why haven't we been writing about him every every day?

Super fun side note that we're going to great lengths to get in here: the school that Chapman teaches at is run by Tom Campbell, a former US Congressman who thought it might be maybe sorta cool to be Governor of California in 2010. Clearly he did not pursue this lofty goal, as California is currently under the socialist thumb of aging hippy Jerry Brown. He did, however, decide to take a run at the U.S. Senate but did not get past the Republican Primary because he was crushed by Carly Fiorina's deployment of the single greatest political ad of all time, the infamous demon sheep ad, which explained that Campbell was a RINO or a terrifying human-sheep hybrid or both. You should go watch that thing again, really really. Maybe a couple times. Forget about all the Big Angry News coming down the pike (looking at you over and over Rick Fucking Perry), draw yourself a bubble bath, take some quality me time, put that ad on loop, and laugh your balls off. You deserve it.