George Bush Vs. The Shoes 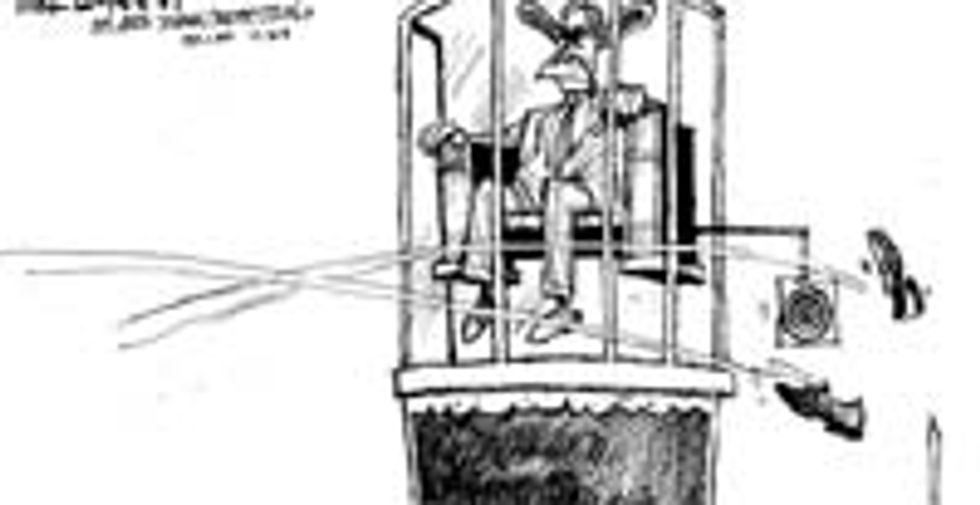 By the Comics Curmudgeon
Hey, everybody, did you hear about what happened in Iraq this week? Obviously, I'm not talking about the carnage and the death, because the "surge" is "working" and the daily levels of terrible violence there have subsided to a point that is only a dozen times worse than anything any American civilian has ever experienced, instead of a million times worse. No, I'm talking about that Iraqi journalist who threw his shoes at our beloved lame duck president!

On the one hand, this event consisted of a literal Iraqi journalist hurling a physical pair shoes at our actual president; but, in another, less real sense, it was METAPHOR fraught with SYMBOLISM. And who is best at capturing that symbolism? Cartoonists! You know it! They created eighteen gazillion cartoons about this famous shoe-throwing; let's see, like, five or six that are representative of the different trends.

Theme: Look, it's George Bush under a huge pile of shoes!

Like all professional humorists, your political cartoonists know that more is more! For instance, our Iraqi journalist Muntadhar al-Zaidi only had two shoes to throw at the president; even if he had had more, probably he would have only been able to throw another four or five, tops, before being subdued by security. But ... what if some person or persons, somehow, had been able to throw literally dozens of shoes at Bush, until they were stacked up around him in a huge shoe-pyramid? And they were of various sizes and styles? Wouldn't that be hilarious? Ha ha! Shoes! Probably they smell bad!

Theme: We here in America, we would also like to hurl shoes at the president, because we don't like him so much, these days!

If you believe some cartoonists, our commander-in-chief is not the most popular person to come down the pike, these days! Some of these communist terrorists think that Americans too would like to hurl footwear of some sort at George Bush, and are wont to depict them doing so. This cartoon at least has the imagination to have the targeted president standing somewhere other than behind a podium like the one where he dodged the shoes in real life -- in fact, he's in a venue where it actually seems more logical to have shoes thrown at him, or at least more logical than it did before a few days ago, when our world became even more of a surrealist joke than it already was.

Theme: Those tiny little shoes that George Bush ducked are no match for this huge enormous shoe that's going to crush him like a bug!

Most of the cartoons of this type (and yes, they made up a huge subset of the Bush vs. Shoe cartoons) had the giant enormous shoe labelled as HISTORY or PUBLIC OPINION or some crap like that, but I have to give this cartoon credit for just showing us George Bush about to be crushed to death by a giant shoe-clad foot, for no reason, other than that it would be terrifying and awesome. The cartoonist is actually Israeli, so maybe this is the inscrutable foot of YHWH, whose motives are not to be discerned by mortal men.

Theme: We are all George W. Bush now, what with the shoes being hurled at us.

Remember how lots of Americans voted for George W. Bush because he was the kind of guy you could have a beer with, even though he was a recovering alcoholic who doesn't actually drink beer? That's because "have a beer with" isn't meant literally; it's a metaphor for being "relatable," because he seems like the kind of guy who'd get into the same situations that you or I would! Like, for instance, life in America today, with the ... let's see ... [squints at tiny type on shoes in cartoon] layoffs and credit crunch and big 3 and bankruptcy and fraud, often feels like you're standing behind a podium, minding your own business, when all of the sudden a bunch of shoes are coming at you! Of course, all these shoes are George W. Bush's fault. And that means he's relatable, because that shoe that got thrown at him in Iraq was also his fault.

Theme: That Iraqi ingrate only had shoes to throw because of freedom. AMERICAN FREEDOM.

Did you know that under Saddam Hussein, Iraqis were not allowed to throw shoes at their president? Most of them didn't even have shoes! Many didn't even have feet. After America liberated them from this tyranny, that all changed. Now they can throw shoes at visiting heads of state all they want, whenever the mood strikes! And they only get a little bit beaten bloody and thrown in jail indefinitely for it. Huzzah for freedom!