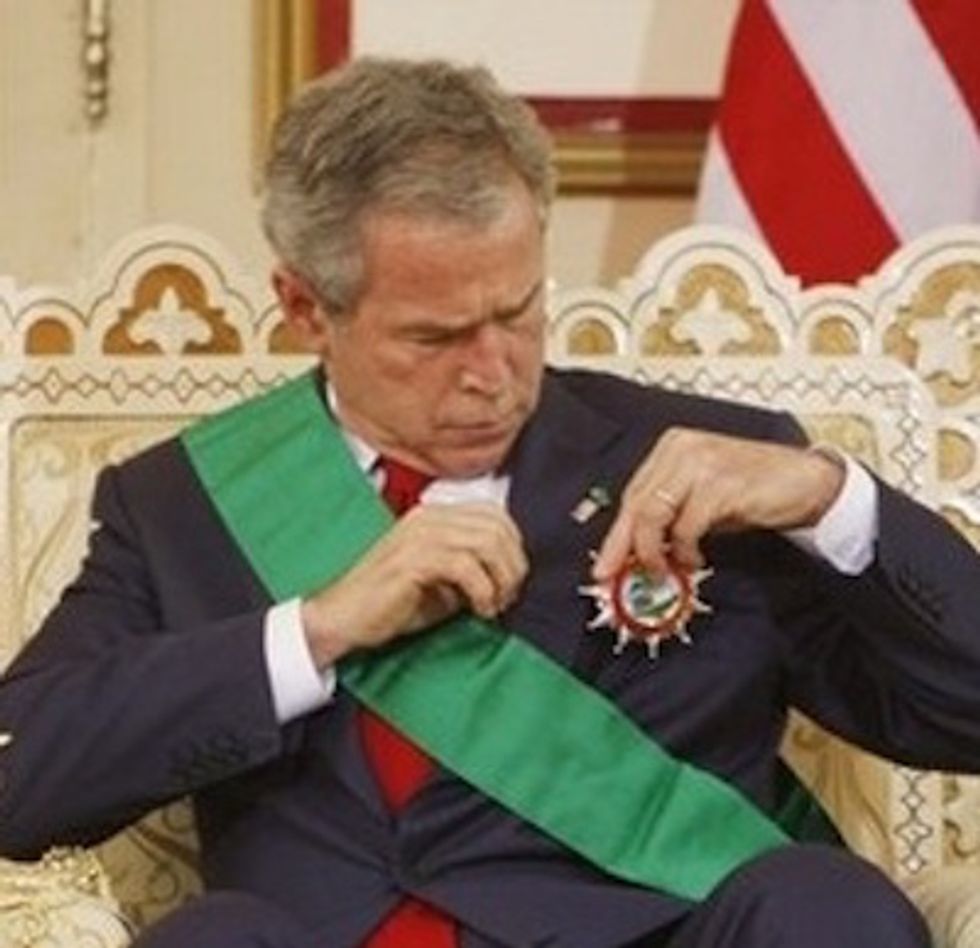 Ever since leaving the White House, the worst president in America's history has mostly kept his stumbling idiot wordhole shut, because he is a man of integrity, and he would never stoop so low as to criticize President Obama, as he explained in 2009:

“I’m not going to spend my time criticizing him. There are plenty of critics in the arena,” Bush said. “He deserves my silence.”

Instead, as always, he's left the dirty work to all of his bestest buds, like Dick Cheney and Dana Perino and Ari Fleischer and Karl Rove and every other person who ever served in his administration, so he could kick back, send nudie self-portraits to his sister, and attend the occasional fundraisers for peeps who tell Jews they really should accept Jesus Christ into their otherwise hell-bound hearts.

But this weekend, at the annual Republican Jewish Coalition extravaganza hosted at Sheldon Adelson's Venetian Hotel in Vegas -- where Republican politicians beg for shekels from the half dozen or so Jewish Republicans in America -- the former literal usurper-in-chief shared his "thoughts" on how President Obama is ruining Bush's glorious Missions Accomplished in the Middle East:

At one point, he cited Senator Lindsey Graham of South Carolina, a possible presidential candidate, who has criticized Mr. Obama’s policies in the region. Mr. Bush quoted Mr. Graham as saying, “Pulling out of Iraq was a strategic blunder.”

If there's anyone who should understand strategic blunders, it would be George W. Bush, who spent his entire presidency blundering all over Iraq and Afghanistan. Would it be super dickish to point out, again, that time Republicans like Graham's hetero lifemate John McCain considered pulling out of Iraq a victory, for which Bush deserved credit?

Bush also reminded attendees of how he did all that awesome ass-kickin' and war-winnin': by talkin' real tough and killin' the bad guys dead.

“In order to be an effective president ... when you say something you have to mean it,” he said. “You gotta kill em.”

And it was because of George Bush's meaning it so hard into a bullhorn that he was able to defeat Al Qaeda forever and smoke out bin Laden, dead or alive, except for how that didn't happen at all because it turned out catching that one bad guy was kind of hard actually. For Bush, anyway. But he did catch other bad guys!

He defended his own administration’s handling of terrorism, noting that the terrorist Khalid Sheikh Mohammed, who confessed to killing Wall Street Journal reporter Daniel Pearl, was captured on his watch: “Just remember the guy who slit Danny Pearl’s throat is in Gitmo, and now they're doing it on TV.”

So even though Bush failed to do any of the things he swore to do while he was president, it's clear his policies were best, which is why if Obama weren't such a weak FAIL, he would be following them. Like, say, in Iran:

Mr. Bush voiced skepticism about the Obama administration’s pursuit of a nuclear deal with Iran. Although he had begun the diplomatic effort to press Iran to give up its nuclear program, Mr. Bush questioned whether it was wise to lift sanctions against Tehran when the Islamic government seemed to be caving in, and suggested that the United States risked losing leverage if it did so.

Gee, maybe it is a strategic blunder to pursue the negotiations with Iran that Bush started. Dumb Obama, why can't he be more like Bush but in a different way? That's why America needs another REAL president, maybe another Bush even, to swagger just right and defeat all our enemies like George did. Not that he wants to push too hard for his brother Jeb:

He expressed a reluctance to enter the campaign fray, because it could be unhelpful to his brother and unseemly. “That’s why you won’t see me,” he said.

That's funny, because if George Bush was such a great president who did everything the right way and killed all the bad guys except for the ones he couldn't catch and the ones who got tossed into Gitmo, why ever would he think it might harm his brother's chances of becoming president by reminding voters of that time he was president? Dubya was so damn good at presidenting, he even pulled off victories in the Middle East after he left office! Who wouldn't want another member of that genius gene pool, so we can get back to re-winning all those wars Bush won, until President Obama un-won them, with his strategic blunders. That's all on Obama; it's not as if Bush is in any way responsible for the consequences of his presidency:

For George W. Bush, the remarks in Vegas showed he has little respect for how the current president is running the world. He also revealed that he takes little responsibility for the policies that he put in place that contributed to the current state of affairs.

Sure, it's not like he almost broke the economy for good and got us into an unnecessary war that has somehow failed to spread peace and democracy throughout the Middle East even though that was totally the plan. Apparently, in Bush's Bush-addled brain, everything was just fine until Obama took office, even though that is not how anyone in America, save for Bush's closest friends and family and the idiots at Fox, remembers it, which is why no one is excited about yet another Bush presidency.

Yeah, maybe on second thought, it would be better if George just went back to his Houston mcmansion and kept his mouth shut.