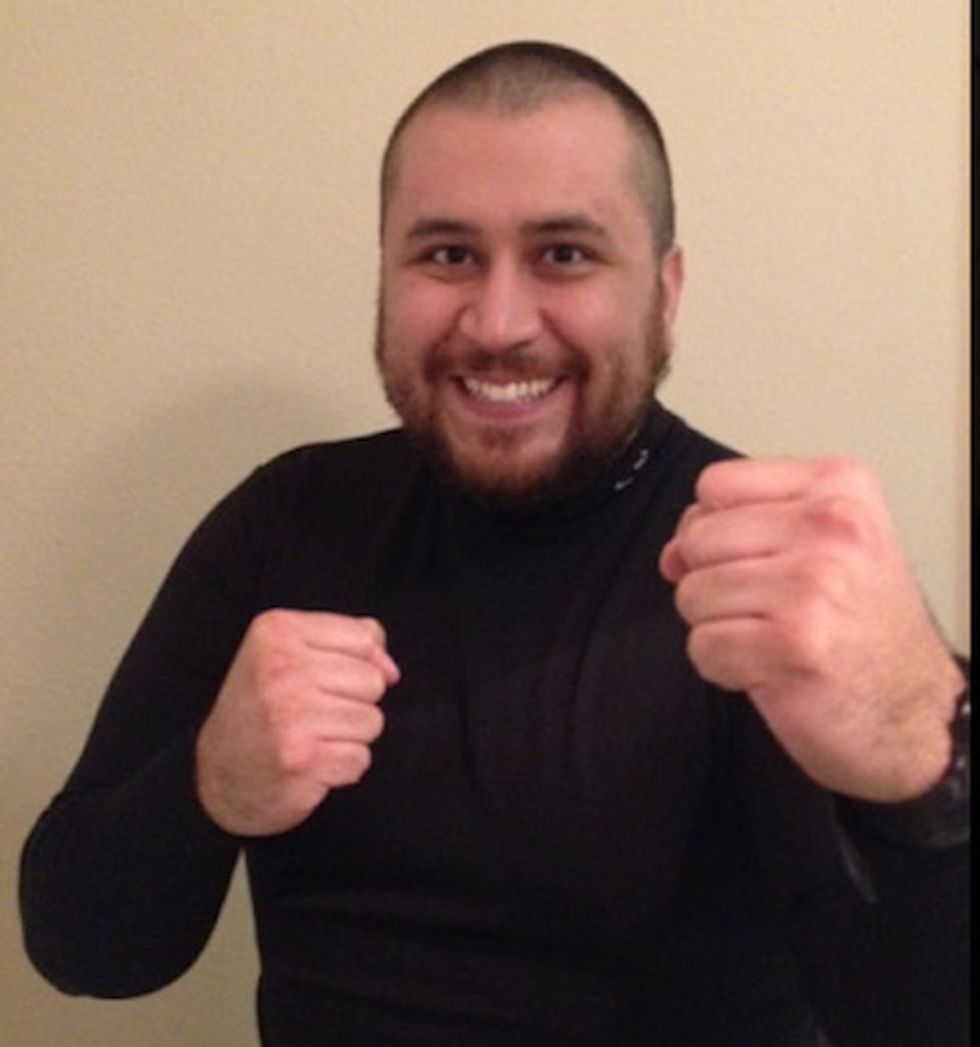 It's been a little while since we've checked in on the escapades of Completely Innocent Teen-Killer George Zimmerman, at least not since he got fired from hispretend duties as a night watchman at a gun shop that hadn't invited him to watch it anyway, followed about five seconds later by an alleged incident of gun-waving road rage.

But today, GQ brings us all the Zimmerman news we need until the next stupid goddamn thing the former GOP presidential frontrunner thinks of. Zimmerman himself is only a second-hand presence in the article, because the great icon of freedom and the Second Amendment refused to talk to reporter Amanda Robb unless GQ would pay for him to stay in a nice hotel for a week. But because of the magazine's cheapness, Robb had to settle for talking only to the other Zimmermans, who turn out to be a pretty interesting crew themselves.

Two years and change after George shot Trayvon Martin dead, Zimmerman's parents, Bob and Gladys, and his sister Grace remain in hiding in a rented house somewhere in Florida, where they hide out with their guns and their sense of persecution. And then there's George's creepy weird brother Robert, who in addition to serving as the family spokesman serves as a source of great ideas for George's inevitable triumph as a reality TV star, which might be easier if George would agree to fly to a studio (he refuses to go to airports, where he'd have to "show his ID ... possibly to a black person"). Still, Robert's hopeful he can engineer a media career of some sort for his younger brother.

The other Zimmermans are also charmers. They're pretty sure they're in constant danger, because there were death threats on the internet, and also because the New Black Panthers offered a bounty for a "citizens' arrest" of Zimmerman in 2012, and that means they need to be vigilant. So they stay holed up in their rented house, after taking some advanced security measures, of course:

They watched the movie Argo to learn how to live like CIA. Code names for everyone. No mail delivered to the house. No visitors. No talking to the few neighbors they had. No long phone conversations -- keep it short and vague to outwit surveillance. Never discuss your whereabouts via phone or text. Keep a weapon close by at all times. Robert slept with his gun. Still does.

And in case someone -- or multiple someones -- decided to mount an attack on the house, the Zimmermans pre-packed their own "go-bags" filled with everything they would need to flee in a rush, as well as what they called "footballs" -- like the one President Obama has with the nuclear codes -- that contained laptops, cell phones, and other essential electronics.

They also refused, after some intense negotiations, to let Robb visit them at their safehouse, even after she agreed to wear a blindfold, leave her cell phone with its GPS behind, and Triple Dog Swear not to reveal their location. Bob Zimmerman explained in an email:

I understand you may consider us uncooperative or somewhat paranoid. However, we live with a situation that can not easily be imagined. We have known the results when various individuals have realized one of us is a Zimmerman.

Robb, clearly some kind of lamestream media puppet, doesn't seem to understand just how scary it is to be a Zimmerman:

"We have known the results." It's not clear to me what he's referring to. The New Black Panthers? They never came knocking. The Internet threats? Just empty words, lobbed from a distance. That time a Publix employee recognized George and refused to make him a sandwich? The time Robert was almost beaten up in a Starbucks? Nothing actually happened, so it's hard to know if the threat was real or imagined.

And they have suffered, gentle readers. George's mother, Gladys, can't believe that the Martin family has gotten all kinds of help and publicity, while her family has not: "It often seems as if she believes the Zimmermans have suffered equally, as if they have lost a son as well." And really, haven't they?

The sufferings of the Zimmerman family appear to have no end, in fact. Neither George nor Robert has been able to hold a job for most of the last two years, although Robert has recently found a job as a deliveryman. And George is still worried that he'll be charged with violating Trayvon Martin's civil rights; according to his father, he's deeply concerned about how that might play out:

"He's worried," Bob says, "that if FBI agents come and kick in his door, he's probably gonna shoot a few of them."

If only there were something George Zimmerman could do to keep that from happening. But life as a Zimmerman just isn't easy.