Georgia Pol Will Unmask These Brutuses, Iagos, Dastardly Villeins Who Plungeth Knives Unto His Back; Is Not Crazy 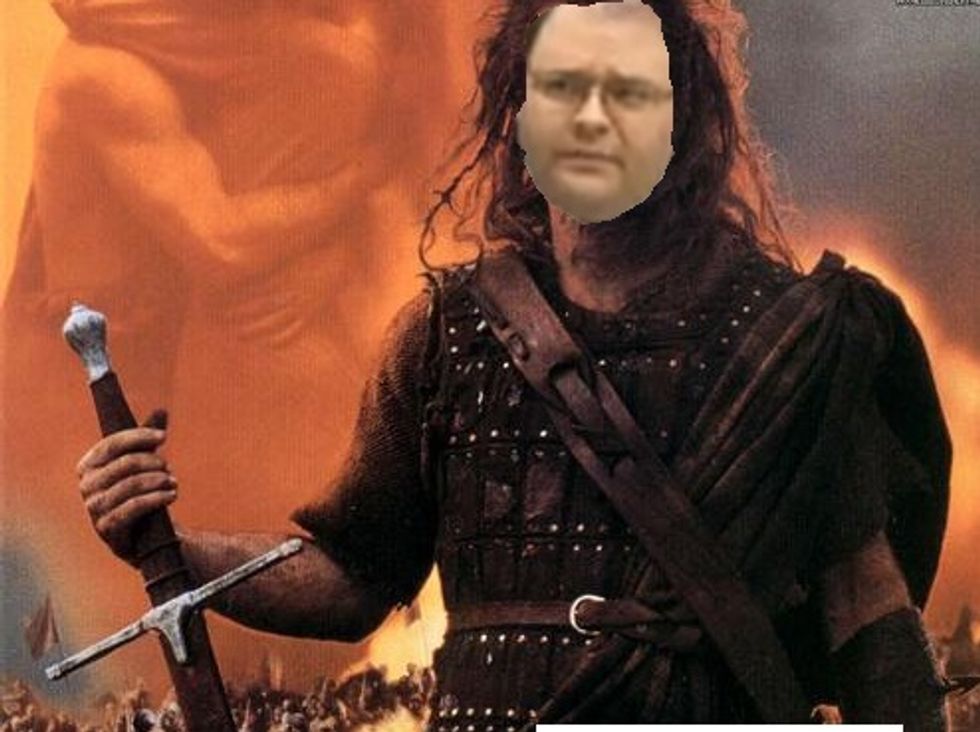 Georgia state Representative Jason Spencer sat upon his mount, Puffikins, and narrowed his noble and handsome gaze upon the hills. He knew they came, and they would be legion. He planted his staff in the heather andsang a little song. It wasn't a very good song, but it was his. It would be sung by grateful citizens through history, a musical ode to his bravery in the face of the fuckers who would murder him by tabling his awesome bill.

Georgia state Representative Jason Spencer's awesome bill, HB 707, was the bravest most patriotic bill that had ever been introduced throughout any land. It explained to the federal government that they should die now for the crime of making serfs out of the populace through the provision of doctors visits and expanded Medicaid. Georgia state Representative Jason Spencer, he would die on this hill. Also, he would

prohibit any state agency, department or political subdivision from using resources or spending funds to advocate for the expansion of Medicaid; prohibit the state of Georgia from running an insurance exchange; refuse federal grant money for the purpose of creating or running a state insurance exchange; end the University of Georgia Health Navigator Program; and prohibit the Commissioner of Insurance from investigating or enforcing any alleged violation of federal health insurance requirements mandated by Obamacare.

And how did his own people respond? After the Georgia House had approved his grand brave bill 115 to 59? The Republicans in the Georgia Senate -- they tabled it.

“That eleventh hour betrayal effectively killed the bill, but it could still be brought back to life by amendment of companion legislation,” said Rep. Spencer. “Tomorrow [today!], I will identify the Republican Benedict Arnolds, the King George the Third and his myrmidons who ship wrecked my path breaking, patriotic bill (HB 707) to prevent the federal Leviathan from commandeering the machinery of state government or resources to enforce ill-conceived federal health insurance mandates. A patriot saves his country from his government. HB 707 would have been the first occasion in a century to draw a constitutional line against state complicity in endless federal encroachments.”

Georgia state Representative Jason Spencer smirked. Yeeeeeah baby, he sounded awesome and brave and very very manly, and he definitely did not sound crazy at all.

He heard the clatter of hooves from atop the crest. He saw their mounts' smoky breath, their flaring nostrils, as they roared down the hill, legions of them. Soon they were upon him. OWWWWWWW he shrieked, but it was muffled beneath the steeds' strong limbs, as they danced upon his broken body.