Get Ready For Your Big Benghazi HearingPalooza 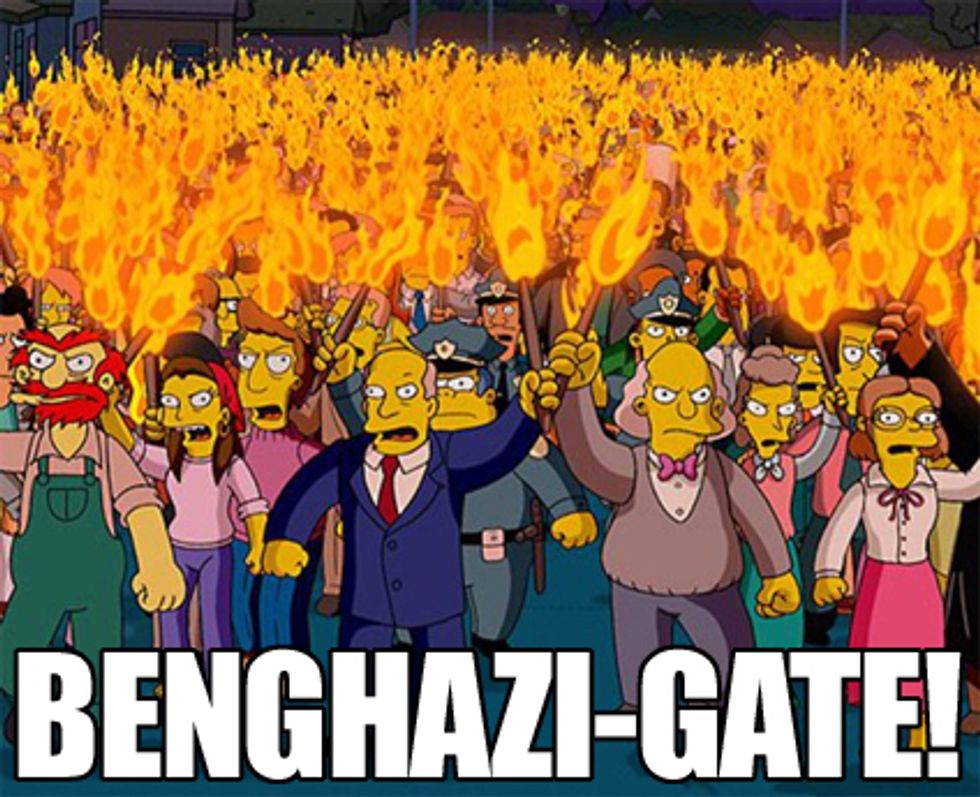 Just in time for election season, the Great Big Benghazi Hearings and Airing of Grievances are starting Wednesday, so get ready for yet another round of Fox stories about "stand down" orders, Barack Obama sleeping on the job, and of course Susan Rice covering up the attack by saying that it started as a demonstration against an anti-Muslim video (which it did).

Strangely enough, as David Corn points out over at Mother Jones, the very first session of the hearings won't actually focus on any of those rightwing fixations. Instead, it will actually look into something that may be useful and worth congressional review: What has the State Department done to improve security for American diplomats after Benghazi? Weird! Corn notes that the focus of this first hearing was set by Democrat Adam Schiff of California, who managed to convince the Select Committee chair, Republican Trey Gowdy, that it would be worthwhile to look at how State has implemented the recommendations of an independent review board. So at least one day of the hearings will be about "substance, not conspiracy theories." Of course, that leaves plenty of time for conspiracy nonsense later.

In some ways, these are the hearings that Fox News built, and a new report from Media Matters details just how nutso the network was about pushing the Benghazi story. In the 20 months between the attack on Sept. 11, 2012, and the formation of the House Select Committee on Benghazi in May 2014, Fox ran 1,098 afternoon and prime-time stories on Benghazi in the five shows that the report reviewed (sorry, Fox & Friends -- you said a lot of stupid stuff too, but you weren't counted). That averages out to about 13 Benghazi stories a week. HuffPo has a nice breakdown of the kinds of stories the report looked at, including 244 segments that claimed that Barack Obama didn't initially call Benghazi "terrorism" or a "terrorist act," although as we may recall from that one debate with a rich guy, Obama did call it an "act of terror" the morning after the attack. This does not count, of course, because he did not use the word "terrorism," and Barry H. Bamz is a pawn of the New Word Order.

Other fun numbers: 478 segments about Susan Rice's talking points on the Sunday news shows the weekend after the attack; 281 segments claiming that there was a "cover-up" of the events, with over 100 comparisons of Benghazi to comparatively unimportant scandals like Watergate and Iran-Contra (yeah, but 4 Americans didn't DIE in Watergate, now did they????); 105 reminders that Hillary Clinton's 2016 presidential campaign is going to have to answer All The Benghazi Questions; and 174 Benghazi stories in just the month before the 2012 election -- even to the exclusion, on Fox, of coverage of Hurricane Sandy.

After finally deciding to take part in the hearings, which initially looked like they were going to merely be a litany of rightwing talking points, the Democrats on the Select Committee have set up a spiffy website called Benghazi on the Record: Asked and Answered, which pulls together the major talking points about Benghazi and documents how the supposedly "unanswered" questions about Benghazi have already been addressed by the 13 hearings and over 50 briefings already conducted on Benghazi. It's a pretty good research tool and a nice proactive "We've been over this already" to the Republicans who just want answers.

The fun all kicks off tomorrow; we'll probably have C-SPAN on all day. We'll leave it to you, dear Wonkers, to come up with a drinking game.

[Mother Jones / Media Matters via HuffPo / Benghazi on the Record: Asked and Answered]