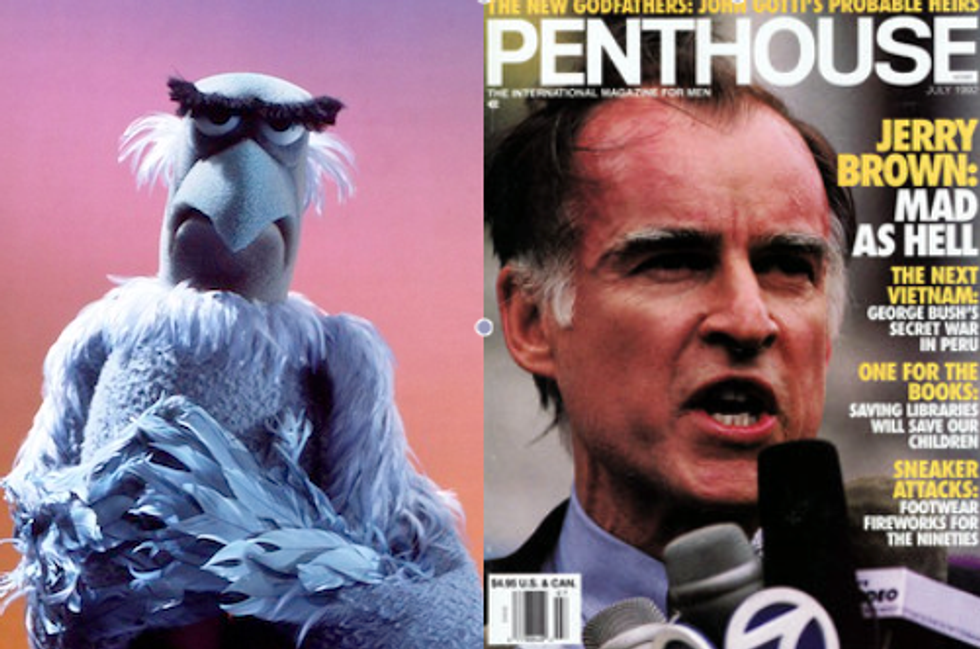 ABC News reports that California Governor Jerry Brown is undergoing treatment forprostate cancer, OH NO! News of Governor Brown's illness came courtesy of an ABC News alert right to our inbox (VIP Y'ALL), and was under stories about Chris Christie being fat, Hillary Clinton being too old in 2016 to run (your Wonkette is afraid that this is so, same goes for our much-loved Old Handsome Joe Biden, as he has "Old" right there in his name), and Hillary Clinton's hair. Let's read about Hillary Clinton's hair some, shall we?

From Dana Hughes report - "It's longer than it has been previously, and that, Clinton told Walters, is by design. "I do not travel with any hairdresser, or anybody, to help me do that, and I'm not very competent myself. I've been admitting that for years, which should be obvious to everyone," Clinton joked. "And so it became simpler to just grow it so that I can pull it back, and I can stick rollers in," said Clinton calling the conversation "girl talk" between her and Walters.

Rather than being annoyed by all the talk about her hair and appearance Clinton said she finds it amusing. "It's fascinating to me how people are so curious about it. Because after a while, it just got to be really burdensome to try to find a hairdresser in some city, somewhere, oftentimes not being able to speak English, that at least I could communicate with," she told Walters. "So, I said enough, we're just going to try to go with as simple as possible."

Shut the fuck up, ABC News.

ANYWAY, California old man governor Brown, who is much loved in our Golden Dream by the Sea (vomit) for being sort of an older, in-shape version of crotchety New Jersey gov Chris Christie, except with a ton of interesting ideas and not yelling at teachers, is having some localized radiation treatments and should be in ship-shape shape before you know it, because that is just how it is going to be.

Sorry hot piece Gavin Newsom, you will stay lieutenant governor forever because Ol' Moonbeam is not going nowhere no how.