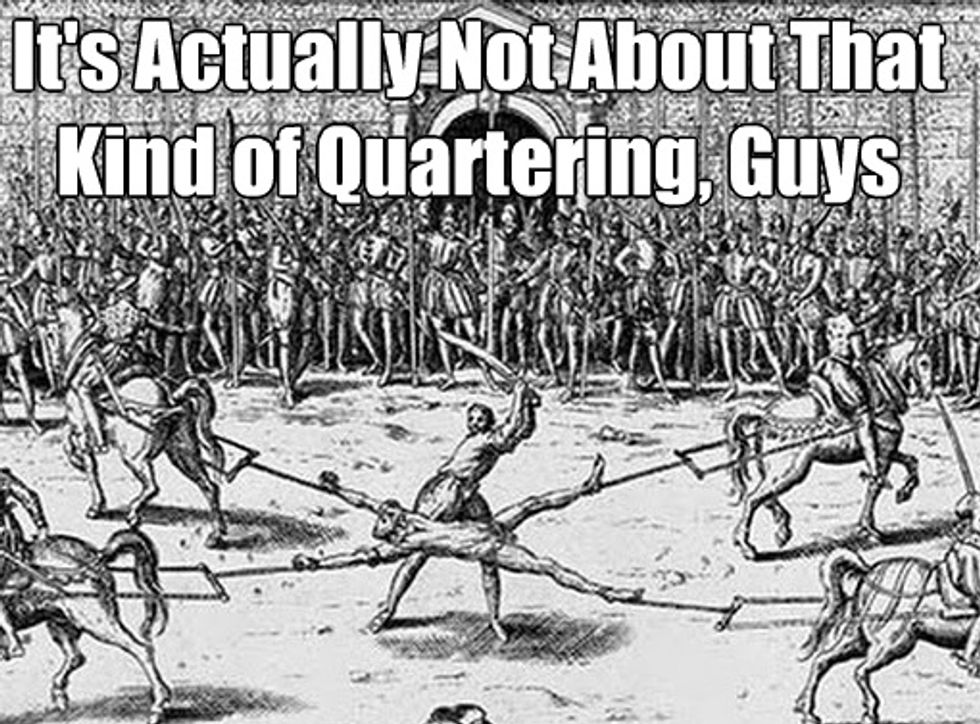 Well how's this for a weird confluence of unlikely events? A Nevada family issuing a local police department for alleged violations of the rarely invoked Third Amendment. Not only that, but it's being reported -- accurately! -- by Ghost Breitbart's Internet Tendency, and we agree with pretty much everything Breitbart's Ken Klukowski says about the fuck-tussle that played out in Henderson Nevada in July 2011. Can we have a chorus of civil liberties Kumbayah in here?

Here's the skinny: On July 11, 2011, Henderson police officers wanted to use Anthony Mitchell's home in the Las Vegas suburbs to observe a neighbor's house as part of a domestic violence investigation. Mitchell refused, saying he didn't want to get involved (maybe kind of dickish, but the Constitution often protects dickishness). The police then forced their way into Mitchell's home, pointed their guns at him and fired "pepperball" projectiles at him and his terrified dog, "Sam," then arrested Mitchell for "obstructing a police officer" and used his home for the rest of the day as an observation post. They terrorized the dog, guys, and then, just to be bastards, they locked the poor thing outside in a confined space, with no water on a 100-degree day. The cops also commandeered Mitchell's parents' house, nearby on the same street, for use as a "command center," and ransacked the fridge in their home, the slobs. The obstruction charges were eventually dismissed, but none of the cops were ever disciplined. Oh, and the guy they were snooping on in the domestic violence case was arrested, so there's that.

So now the Mitchells are suing the bejeezus out of all the cops and every law enforcement agency in Nevada and possibly some on the Moon, and part of their case involves a claim that the police violated the Third Amendment's prohibition on quartering soldiers in civilian homes during peacetime*. As Klukowski notes, the Third is "the least-invoked provision of the Bill of Rights," and has never even been ruled on in a Supreme Court case. So in addition to, we hope, getting justice for the Mitchells following the general awfulness of the cops' behavior, this case has some additional Constitution-Nerd appeal.

But wait, isn't the Third Amendment just about sojers? You know, since it says

“No Soldier shall, in time of peace be quartered in any house, without the consent of the Owner, nor in time of war, but in a manner to be prescribed by law.”

Isn't it kind of a stretch to claim that applies to cops, even bad nasty mean dog-harassing cops?

Klukowski says (and our Oxford Companion to the Supreme Court concurs) that in one of the only federal cases to rule on the Third Amendment, Engblom v. Carey, National Guard troops could be considered "soldiers" when mobilized by the state (in Engblom, to replace striking prison guards). So, under the 14th Amendment, it's possible that police may be constrained by the Third Amendment as well, but it depends on whether the court decides that police count as "soldiers" under the amendment, what with the guns and the state sanction of force, as well as whether a one-day seizure of a house counts as "quartering," both of which seem like a stretch to us, but who knows?

Even without the Third Amendment issues, it sounds like the Mitchells have a strong case against the police; an actual decision on the constitutional questions would give us a serious nerdgasm, though.

In any case, we hope Sam the dog is OK.

*Your editrix tells us that she once ran around Sacramento ALL NIGHT LONG looking for libertarians, with their handy pocket Constitutions, because neither she nor any of the equally blotto staffers there could remember what the goddamn Third Amendment even was.