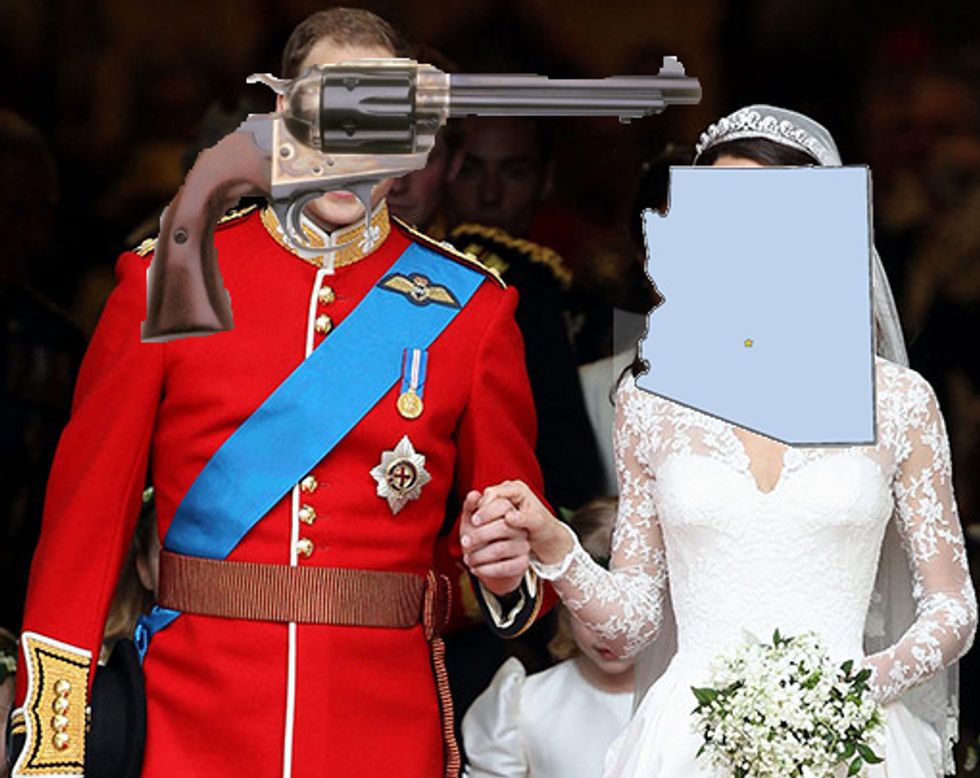 Arizona finally made it official: It married a gun. Jan Brewersigned the infamous bill naming the Colt Single Action Army Revolver the state's official gun yesterday. Congratulations! We're so happy for you crazy kids (and we mean crazy). It was surely a beautiful ceremony attended by many and their guns, and although Arizona is not exactly a virgin when it comes to guns, we're sure it had an exciting night of sex with its new gun. The event, however, was marred by the absence of Gabrielle Giffords. Why didn't she show up to the ceremony? Is she just bitter? Why can't she just be happy for Arizona and the the murder device that almost took her life?

Look who else spoke up against this holy union of state and deadly weapon:

A Navajo Nation lawmaker also strongly objected to honoring a gun that killed his people and so many others during its long history in the American West.

How DARE you, sir? How DARE you?! Love knows no bounds. It cannot be stopped by tens of thousands of Native American corpses. You are also just bitter, but that doesn't matter, because love still won in the end.

The measure landed on the Republican governor's desk after narrow approval by the state House last week in the waning hours of the legislative session.

See, somebody had their priorities in order! This "waning hours" thing sounds like it would make for a great device in a romantic comedy. Arizona and its gun should write a screenplay about their beautiful love and all the jealous people with bullet wounds in their brain who tried to stop them. That would teach them to not stand in the way of love!