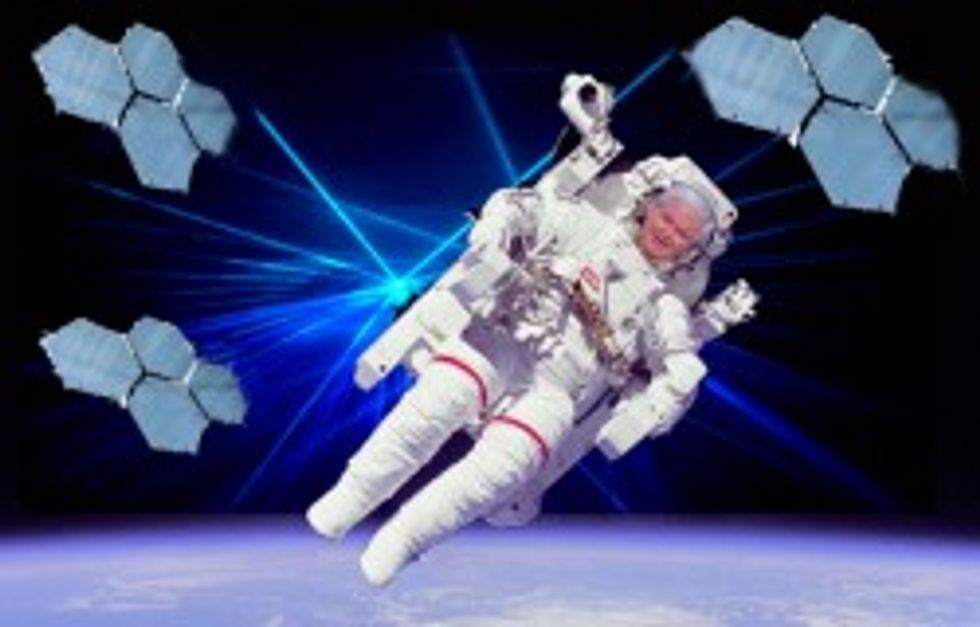 Probable Florida primary loser and mean-spirited twerp Newt Gingrich will FAIL to colonize the moon because he will never become president, but you know what he CAN colonize? That one little patch of grass, yeah that one right over there where a lone Ron Paul supporter is standing quietly holding up a sign. Newt Gingrich wants exactly that spot, and he will have it or he WILL ORDER HIS MINIONS TO BREAK SOME TOES, you hear? Well gosh darn it, the Ron Paul guy doesn't want to move, because hello, Newt Gingrich does not own the sidewalk. And then Drama Ensues.

Here is the entire account of the brutal sandbox fight via Yahoo! News' Chris Moody:

[Ron Paul supporter Eddie] Dillard found a quiet spot along a sidewalk lined with tiny American flags and held up his sign. Little did he know, Newt Gingrich had chosen that very spot to make his first Primary Day campaign stop.

When Gingrich's bus pulled up, Dillard stood silently holding his sign and watched the news-media horde swamp the candidate. Gingrich stepped down from the bus and made a beeline for Dillard. He stopped in front of Dillard and his sign and parked himself for a round of handshaking and pictures with voters. The placement couldn't have been worse. There was Gingrich, standing with his wife Callista at their first event of the day, and a giant Ron Paul sign floated inches from their crowns.

Noticing the awkward optics, Gingrich aides and security personnel swarmed Dillard, trying to intimidate him into moving. One of Gingrich's security agents stepped in front of him. When Dillard didn't budge, the agent lifted his heeled shoe over Dillard's bare foot and dug the back of it into his skin, twisting it side-to-side like he was stomping out a cigarette. Shocked, Dillard kept his ground and took a picture of the agent with his phone, which was quickly knocked out of his hand. Dillard slipped off his flip-flop to pick up the phone with his foot, and a Gingrich supporter kicked the sandal away.

"Don't kick me!" Dillard said to the man who knocked away his sandal. More members of Gingrich's security retinue approached, shoving their shoulders and chests in front of him.

"Just block him!" a Gingrich campaign aide said. "Everyone step on his toes!"

And now Ron Paul is SO MAD and he's all "apologize, BITCH" to Newt Gingrich and he will probably cold slap Newt, in the face, during the next debate, we hope. [The Ticket]