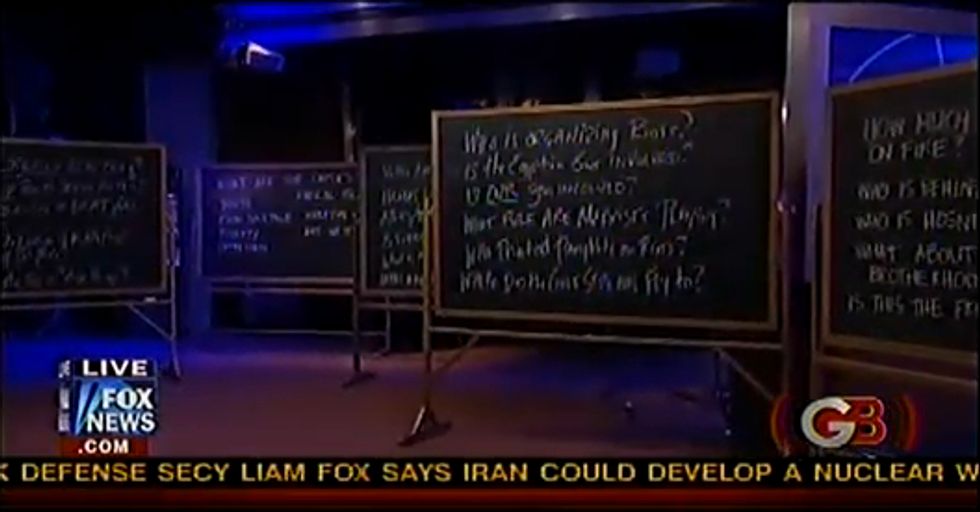 Glenn Beck seems to think this is the most important idea he has ever had, so let's pay attention! Sure, this video appears long, but if you look at it on a conclusions-jumped-to-per-minute basis, it all goes by pretty quickly. LOOK YOU GUYS, GLENN BECK'S CONSTRUCTION-PAPER CAMPFIRE HAS JUMPED OVER TUNISIA AND INTO EGYPT. The s'mores have come home to roost! And now the world is going to end. Just like it does on every Glenn Beck broadcast.

"I believe a snowball is being formed." A snowball made out of construction-paper fire. Construction-paper fire that can jump over countries, somehow turn a strong, secular continent called Europe into "a" caliphate, and transform Muslim countries that should be a caliphate into New China. Domino theories are always the best theories. All countries behave in the same way! That is why diplomacy is so easy.

"You can at least prepare to not get caught in the snowball." Good! We will arm ourselves with fire. WAIT, THE FIRE IS THE SNOWBALL.

"I have chalkboards full of questions."

The wonder of creative writing.

It is really amazing how people who profess to love freedom for freedom's sake suddenly become dubious when certain brown people want it too.

Anyway, Marxism! Marxism too! Don't assume Marxism isn't part of this! We have a whole week of insane ideas to tell you about! [Daily Dish]