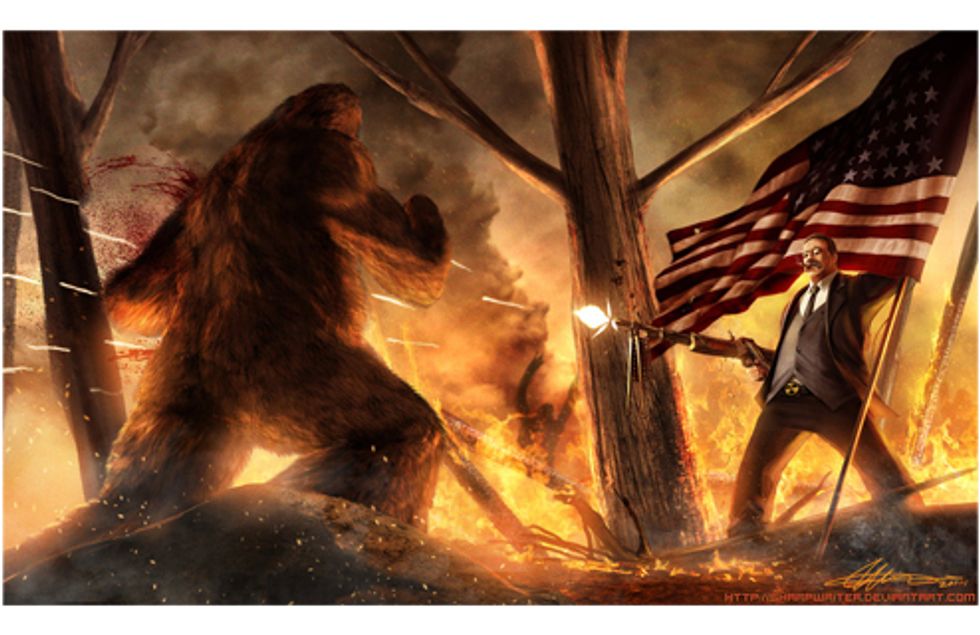 We think we may have a winner in the "Stupidest shit anyone could say about Isla Vista" contest, from perennial entrant Glenn Beck, whoproclaimed today on his radio show that parts of Elliot Rodger's anti-woman manifesto were "almost an exact quote from Teddy Roosevelt." We'd like to thank the other contestants for trying, and to remind them that idiocy of Beck's caliber is a natural talent -- they shouldn't feel bad that their efforts fell short.

Citing part of Rodger's declaration that women "have the right to choose who to mate and breed with" and therefore control men's sexuality, and his belief that women should be rounded up and placed in concentration camps, Beck explained that "that is almost an exact quote from Teddy Roosevelt," although for some reason he didn't include the Roosevelt text he thought it paralleled -- something or other about eugenics, which was definitely what Rodgers was talking about, not his own inability to get the sex that he knew he deserved. And from there it was just a short jump to Progressives as Nazis:

"It's all the progressives, communists, fascists," Beck said. "They're the ones who talk like this ... No small government person talks like this, no constitutionalist talks like this."

And of course, as his co-host points out, who actually put Americans in concentration camps? Progressives! (gosh, and who fought against reparations to those Americans, years later? Small-government conservatives...) And to seal the proof that Elliot Rodger is a Teddy Roosevelt Progressive, Beck reminds us that Rodger's father was a second-unit director on the movie Divergent, a "story about concentration camps." Because if anyone makes an ideological statement in a movie, it's the second unit. Also, we should probably point out that the tuff-teen dystopia Rodger's dad worked on was The Hunger Games, which isn't about concentration camps; it's about kids competing in a brutal life-or-death struggle where everyone's on their own, like an Ayn Rand fantasy.

But that's just what They want you to think, now isn't it?