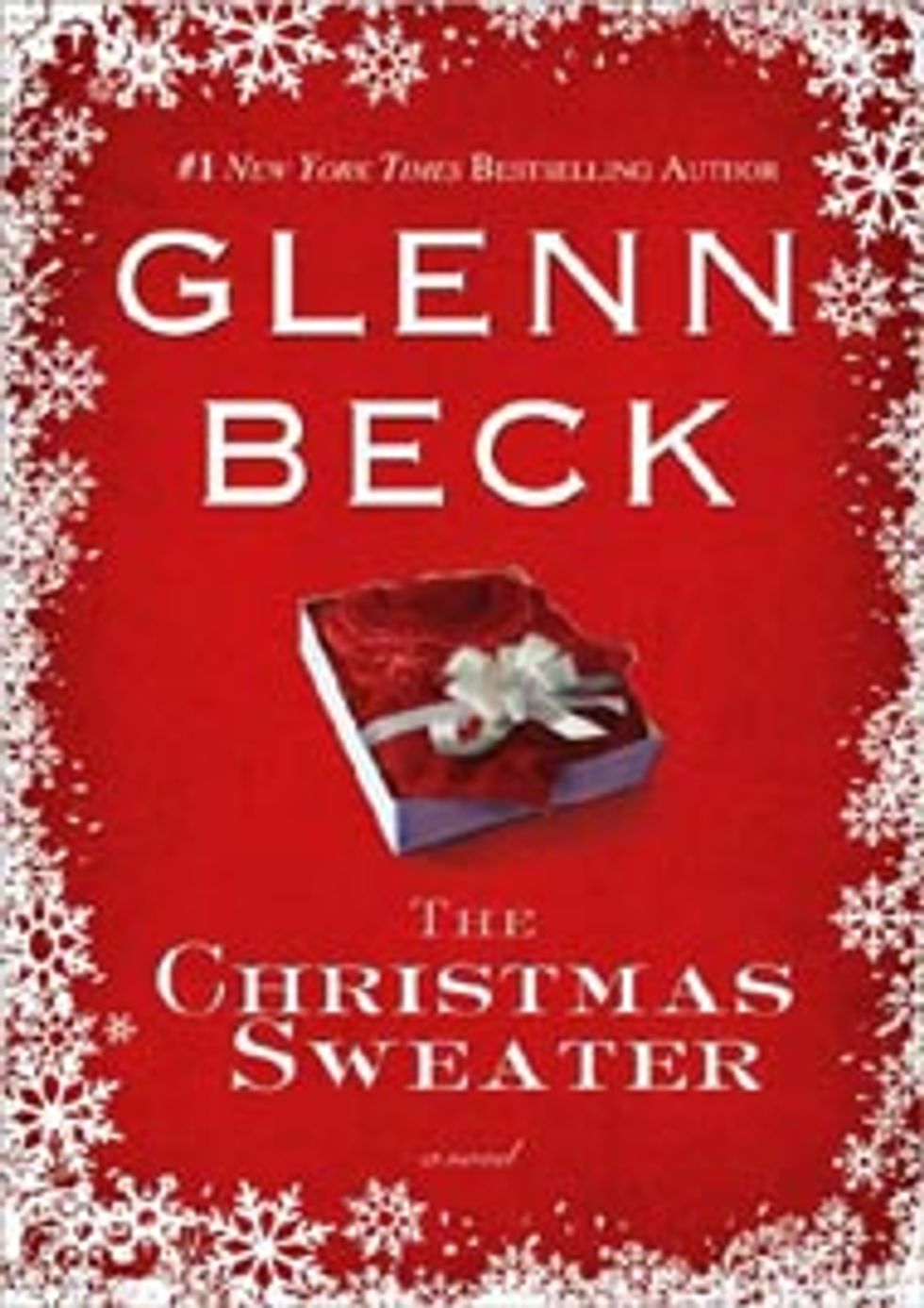 Wonkette World o’ Books is a bit late to the party on this week’s Fine Read. The Christmas Sweater, a curious coming-of-age novel by beloved teevee lunatic Glenn Beck, was actually published in 2008, which took place a full, what, THREE years ago, almost? A picture book version (for the kids) and a film/one-man-show version (for chortling libtards with money to burn on a goddamned Glenn Beck movie) followed in 2009. There were many amusing reviews. But no one, it seems, had read the novel that led to the comical movie/show. Until now.

This description of a mysterious rural person, for example:

“Afternoon,” the well-worn man said as he leaned on one of the few sturdy sections of fence along the road. He was about as old as my grandfather but leaner and quite a bit shorter. His eyes looked like they belonged to a much younger man, but his face was nearly caked with dirt, and his full, speckled beard sprang from his face as if trying to escape.

The escaping speckled beard is an intriguing, if dumb (does this mean that everyone’s fingernails "spring" from their fingers “as if trying to escape?”), touch of surrealism. Most of Beck’s writing is a see-Jane-run affair, with the occasional burst of Straining Towards Poignancy:

Grief exploded within me, forcing out sobs and streams of tears, which poured down my cheeks. I sank to the ground and sat in the rough grass, cross-legged, with my face in my hands. I cried for the first time since my mother died.

Perhaps your reviewer should explain the plot a little bit. The novel is a “memoir” of Glenn’s childhood, except in the book Glenn is called “Eddie.” Glenn/Eddie is born into a family of bakers. Of their financial situation, Glenn writes, “We weren’t wealthy, we weren’t poor -- we just were.” This Zen family runs into hard times early on. Eddie/Glenn’s father dies of cancer, then his mother dies in a car wreck, and then Eddie/Glenn goes to live with his grandparents, to whom he is unceasingly brattish.

Oh yeah, and along the way there’s something about Eddie/Glenn wanting a Huffy bike for Christmas but getting a sweater instead. He hates the sweater and isn't shy about letting his mom know. This upsets Eddie/Glenn's mom, and she dies soon after.  At some point Eddie/Glenn finds out that he was going to get the bike all along, but he didn’t because he acted like a vile ingrate.

He meets a mysterious rural person named Russell, who eventually teaches Eddie/Glenn an Important Lesson, THE END. Or, almost the end. At the end-end Eddie/Glenn wakes up (he was asleep the whole time!) and his mother is still alive. Eddie learns to show appreciation for his mom and his grandparents and the sweater; he ends up getting the bike after all; it was all a dream, God bless us everyone, etc.

There was a further “it was all a dream” twist after the book was published. It turns out that The Christmas Sweater isn’t 100% truthful about Glenn’s childhood, or something (We can’t be bothered to look up the details). Your reviewer isn’t hugely disturbed by fictionalized memoirs; embellished life stories can be great fun, except when they aren’t. The best fictionalized memoirs don’t tell half-truths so much as a truths-and-a-half, to paraphrase somebody.

Do politics ever enter The Christmas Sweater? They do, thanks to Eddie’s baker father (who doesn’t get to come back to life):

“Eddie, Mrs. Olsen is a very good customer of ours. Her husband passed away a year ago and she’s had a hard time making ends meet...what she gave me isn’t money, but it’s just like it for people who need it. They’re called food stamps...”

Dad explained that while our family would never accept help from anyone, especially the government, there were good people who needed it.

Your reviewer reckons he’ll give Glenn Beck some Xmas charity points for this imaginative sympathy for a widow on food stamps. It can’t be easy to write such a character when you believe that everyone on food stamps is a Maoist time-traveler who goes back in time every day to murder the Founding Fathers.

In conclusion: Glenn Beck has the same initials as “Great Book.” Coincidence?

Thanks to Wonkette operative "Jeff." Wonkette World o’ Books is off next week, and will see you cherubs in the New Year. May your War on Christmas be merry and bright.