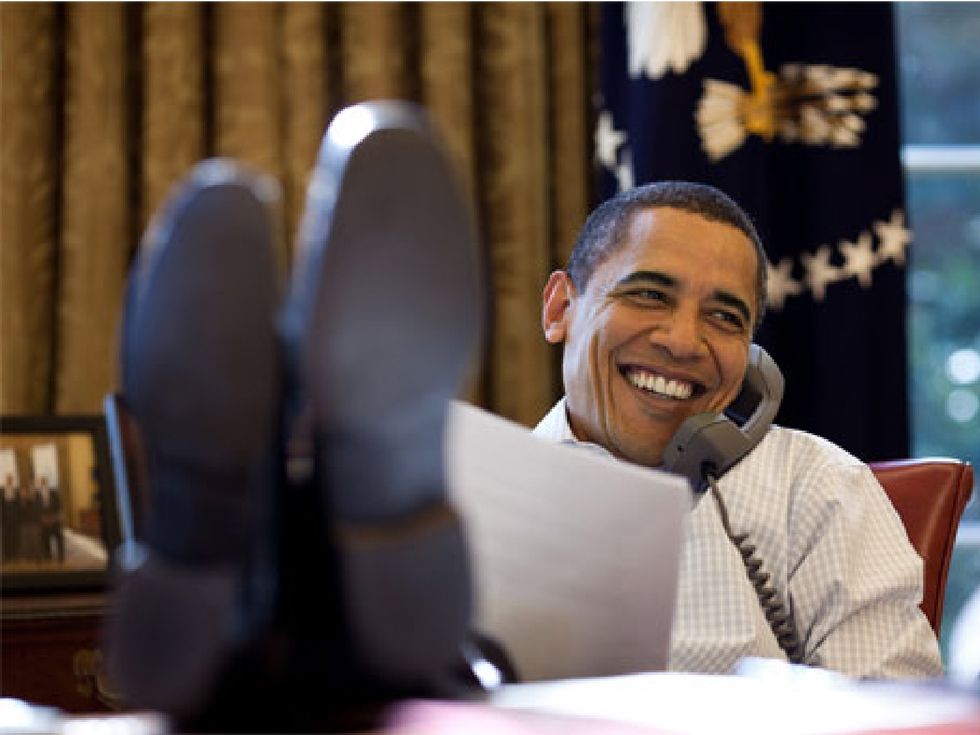 Just like you, we like continuity. We dig on certainty. We like to think that when we surf on over to The Blaze, we'll get some reliable blatherskite (what? we ran out of ways to say "nonsense" in 'Merican so now we're going British) about how Obama is wrecking the country by being too black. Lately, though, The Blaze has BLOWN OUR FUCKING MINDS by making sense on some things even as everyone around them goes nuts. Really, who better than The Blaze to remind us that consistency is the hobgoblin of little minds?

Yes, if you run on over to Glenn Beck's little vanity project, you can see a semi-nuanced article about how Bamz puts his feet on the desk in the oval office but it's cool because everybody does it.

You guys! The Blaze has used the Google to turn up some pix of George W. and perpetual gaffestumble machine Gerald Ford rocking the casual feet look. This is some even-handed shit right here. Republicans have also too placed their feet on the most holy of America's relics, a fucking office desk.

However, even pictures of some of their beloved GOP tribe members has not soothed the rabid beast that is the Blaze commentariat. Also, too, Twitchy Team is on it like white on rice because really there is just nothing they can't be dumb and screechy about.

The Blaze does not let us link directly to comments, so let us give you a quick rundown of the major topics as their hive mind struggles to reconcile how to just hate Obama for doing something everyone else does without just screaming OVAL OFFICE BLACK MAN OHMYGOD for 1000 words straight.

We've got the obligatory 'splaining about how they're just mad because it is Obama and they don't have to justify it, thankyouverymuch. We've got some deeply weird explanations about how Asian people and Muslins do not like it if you show the soles of your feet to them so haha Bamz is so bad at being Muslin except he is a super-Muslin and that's bad. We've got a whole bunch o' yammer about how they are not mad that his feet are on the desk but they are mad that his boot is at the throat of America because of socialism. Lastly, there's some super righteous indignation that he has his shoes up on OUR desk because we own the White House.

Listen, government workers everywhere: we own you. We FUCKING OWN YOU. Get your feet off the desk. Put away your Hello Kitty mug. Wear a goddamn tuxedo to work and show some respect for OUR shit.