Go Home, Orrin Hatch. You're Not Drunk, You Just Need To Go. 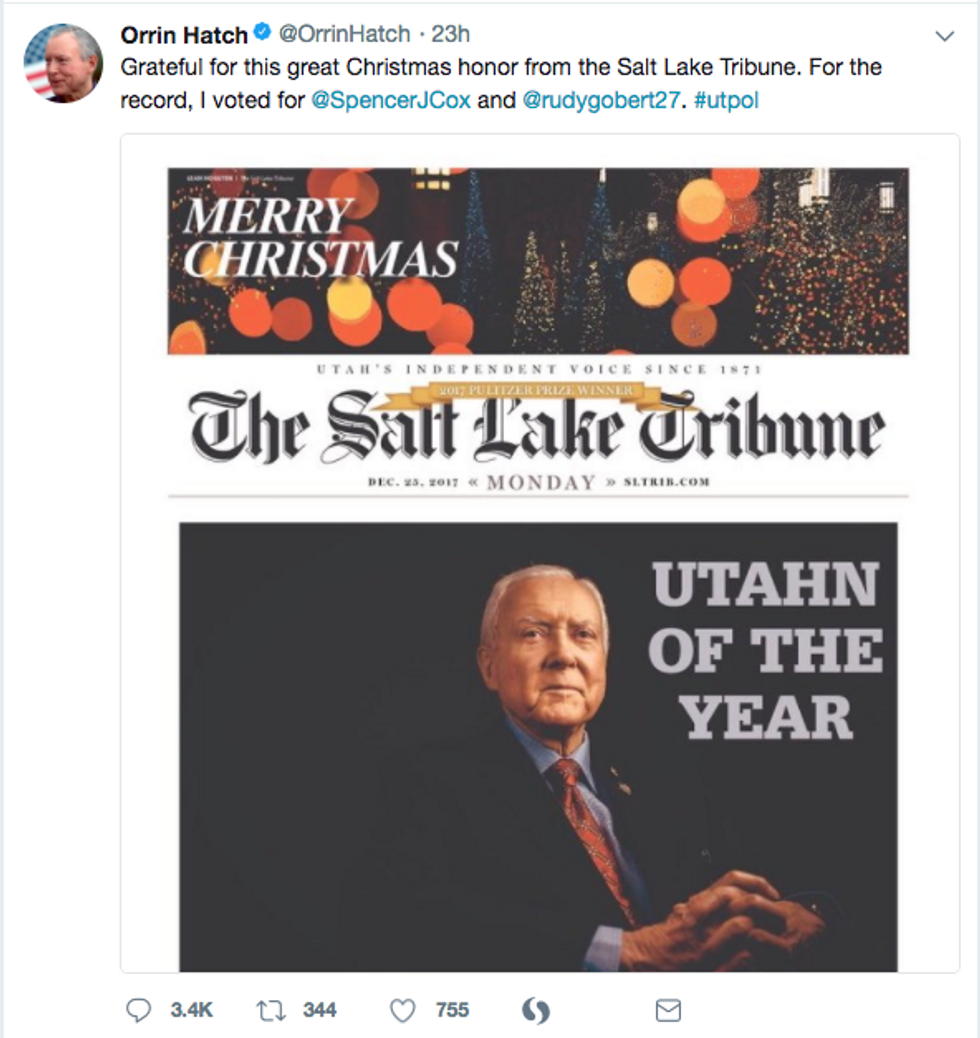 The ratio on this is amazing

There are two major newspapers in Utah. One is the Deseret News, reliably conservative. The other is the Salt Lake Tribune, and its editorial board is Not Having any more of Orrin Hatch's shit. We bring you the following op-ed for your enjoyment, never say we don't get you anything:

These things are often misunderstood. So, lest our readers, or the honoree himself, get the wrong impression, let us repeat the idea behind The Salt Lake Tribune’s Utahn of the Year designation.

Have you ever met a pissed-off Utahn? We are very good at it. We are raised to be so nice it's a bit creepy, so when we are angry it's not at all common for this to be the prose style. Maybe get your snack of choice, this is going to be good!

The criteria are not set in stone. But this year, as many times in the past, The Tribune has assigned the label to the Utahn who, over the past 12 months, has done the most. Has made the most news. Has had the biggest impact. For good or for ill.

The selection of Sen. Orrin G. Hatch as the 2017 Utahn of the Year has little to do with the fact that, after 42 years, he is the longest-serving Republican senator in U.S. history, that he has been a senator from Utah longer than three-fifths of the state’s population has been alive.

No, seriously, most of the state can hardly imagine what the place would be like without Hatch. Utah's not the biggest state, population-wise, and there's something to be said for having a Senator that sits on all the committees. But anyway, Trib board, why is Hatch the Utahn of the year?

At this point in the program I would like to invite any ex-LDS kids in the reading audience to join me in singing songs of Zion because holy shit, Zion is pissed. I am suddenly kind of reconsidering whether maybe I judged my people too harshly here.

his utter lack of integrity that rises from his unquenchable thirst for power. If you're not a Mormon maybe you don't know this but that is a SICK BURN, DUDES. Integrity is one of the Important Cultural Words. This is the Mormon version of saying "I fucked your mom" but then you have video too.

Each of these actions stands to impact the lives of every Utahn, now and for years to come. Whether those Utahns approve or disapprove of those actions has little consequence in this specific recognition. Only the breadth and depth of their significance matters.

"Nobody's trying to take your legacy away from you, Brother Hatch, it's very big. Have you seen all the lovely buildings we've named after you?"

As has been argued in this space before, the presidential decision to cut the Grand Staircase-Escalante National Monument in half and to slash the size of the brand new Bears Ears National Monument by some 90 percent has no constitutional, legal or environmental logic.

To all appearances — appearances promoted by Hatch — this anti-environmental, anti-Native American and, yes, anti-business decommissioning of national monuments was basically a political favor the White House did for Hatch. A favor done in return for Hatch’s support of the president generally and of his tax reform plan in particular.

Every time I read the Trib going hard I think to myself how funny it is that people don't know that there's plenty of reasonable people in what's often considered Trump country. I'm pretty sure more than half of Wonkette's staff lives in red states at least, and we dream of writing the perfect dick joke that would take down Paul Ryan.

And, on the subject of tax reform: For a very long time indeed, Hatch has said that his desire to stick around long enough to have a say in what indeed would be a long-overdue overhaul of the nation’s Byzantine tax code is the primary reason he has run for re-election time after time.

Last week, he did it.

Now this point's important because it's true and overlooked about Utah politics. Hatch has always always said that when he's finished his major goals he'd retire, and that people should understand that one or two terms isn't enough for grand legislation. He's had the whole state supporting him on this for years.

The tax bill that passed the House and the Senate and was signed into law by the president Friday is being praised for bringing corporate tax rates in line with the nation’s post-industrial competitors and otherwise benefiting corporations and investors in a way that backers see as a boost to the economy, even as opponents vilify it for favoring the rich and adding to the federal budget deficit.

No matter who turns out to be right about that argument, the fact remains that tax reform has been talked about and talked about for decades and only now has anything been done. And Hatch, as chairman of the Senate Finance Committee, has his fingerprints all over it.

"No REALLY Senator, we see what you've done there! Very impressively large, this edifice is!" LDS culture, which isn't quite the same thing but Venn overlaps pretty hard with Utah culture, which is all about nice. Not Southern nice, exactly. Like, Utah ladies get into petty neighborhood disputes but the war will play out over who can bring the most perfect-looking casseroles to the most people first, or who can personally shovel the snow from the most elderly folk's driveways. It's vicious.

So when someone gets frank, it's usually pretty brutal.

But perhaps the most significant move of Hatch’s career is the one that should, if there is any justice, end it.

Oh yeah, you remember that integrity thing? How important it is to be seen as someone whose word was solid? WELL.

The last time the senator was up for re-election, in 2012, he promised that it would be his last campaign. That was enough for many likely successors, of both parties, to stand down, to let the elder statesman have his victory tour and to prepare to run for an open seat in 2018.

Actually it's the only way he won. Everyone who could have challenged him not only didn't do that, they endorsed him. They directed support to his campaign bucking for his endorsement in 2018. For him to just up and run again is some next-level palace intrigue!

Clearly, it was a lie. Over the years, Hatch stared down a generation or two of highly qualified political leaders who were fully qualified to take his place, Hatch is now moving to run for another term — it would be his eighth — in the Senate. Once again, Hatch has moved to freeze the field to make it nigh unto impossible for any number of would-be senators to so much as mount a credible challenge. That’s not only not fair to all of those who were passed over. It is basically a theft from the Utah electorate.

*stands up, starts singing hymns under my breath while making a jello dessert*

It would be good for Utah if Hatch, having finally caught the Great White Whale of tax reform, were to call it a career. If he doesn’t, the voters should end it for him.

Sometimes when people meet me, they say that I'm quite blunt. It's 'cause I grew up watching people very politely eviscerating each other in public. "Retire, bitch" but for childrens' ears.

Common is the repetition of the catchphrase that Hatch successfully used to push aside three-term Sen. Frank Moss in this first election in, egad, 1976.

“What do you call a senator who’s served in office for 18 years? You call him home.”

Less well known is a bit of advice Hatch gave to Capitol Hill interns in 1983.

“You should not fall in love with D.C.” he admonished them. “Elected politicians shouldn’t stay here too long.”

If only he had listened to his own advice.

See, this is why Hatch had to tweet a thanks to the Trib for the honor of naming him Utahn of the Year: They used his own talking points, from back when he had some integrity. And then they made sure to tell him how big a contribution he's made. It's beautiful.

Yr Wonkette is sadly not one of Trump's middle class friends so we think Hatch's tax cut probably won't help us, but as we're reader-supported you can keep us writing here: