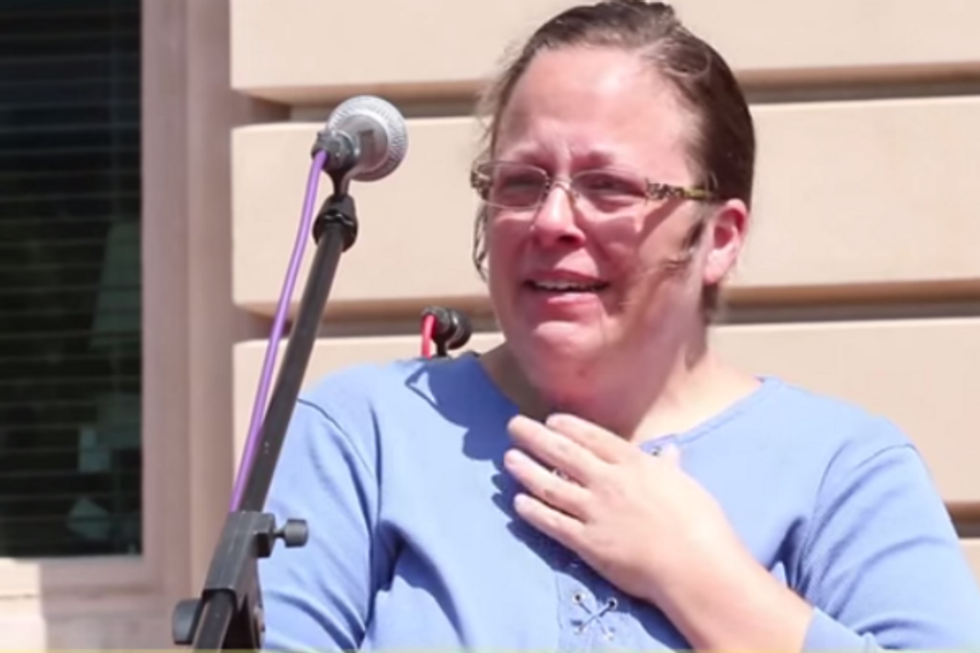 A message from her neighbors

That God, boy, He sure do work in mysterious ways! After 6000 years of saying "Thou shalt not permit a marriage license to be issued by thy clerk's office if it is sought by homosexbians," He slept on it this weekend and said, "Nah, never mind, it's cool."

Rowan County clerk Kim Davis returned to work on Monday, after spending six days in jail, where she could not hetero-bang her second-fourth husband for SIX WHOLE DAYS, and then spending another few days calling in "Jesus" to work. She's back now, though, and the Lord came to her this weekend and told her about this neat loophole where she can keep her job, stay out of jail, and still speak in tongues about how Jesus this that gay marriage blah blah blah amen:

Flanked by Rowan County Sheriff's deputies and her son, Nathan — a deputy clerk who has also refused to issue same-sex licenses — Davis said she loves God and her job but won't authorize the issuing of marriage licenses to gay couples. [...]

Her decision was clear, she said: "Effective immediately, and until an accommodation is provided, by those with the authority to provide it, any marriage license issued by my office will not be issued or authorized by me."

"I love my deputy clerks and I hate that they have been caught in the middle. If any of them feels that they must issue an unauthorized license to avoid being thrown in jail, I understand their tough choice and I will take no action against them," Davis said, but added: "Any unauthorized license that they issue will not have my name, my title or my authority on it. Instead, the license will state that they are issued pursuant to a federal court order."

Davis said she had "great doubts" that such licenses could be considered valid.

Thus, her deputies can issue marriage licenses, as they already started doing the second she was carted off to jail. But she wants the licenses to say "I DON'T LIKE THIS, NOT ONE BIT, THE JUDGE MADE ME DO IT" so that Kim Davis can be right with God. Which is sort of funny, because she is also insisting that only the state legislature may alter marriage licenses and the issuance of them, it's THE LAW. (And yes, she'd like the legislature to get together, like, yesterday to change the law for her.) But somehow, Davis reckons it's legally A-OK for her to alter licenses with her own personal love note -- Here's your stupid "marriage license," you gays, but your marriage probably isn't legit anyway -- to be extra superfluously bitchy, for Jesus.

Davis said during her press conference, through her tears, that she has "been forced to fashion a remedy" to allow her to keep her $80,000 a year salary, parading around as the Rosa Parks of homo-hatin', and testifyin' that gay marriage really hurts God's feelings. She added:

We don't happen to have our Authentic Frontier Gibberish-to-English dictionary handy, but we guess that means she wants errybody to know she has folded like a cheap pair of overalls, but she is NOT HAPPY ABOUT IT, and she does NOT give her deputies her blessing for them to do her job for her.

No doubt Mike Huckabee is relieved he will not have to eat his words and go to jail in Davis's place, as he vowed to do -- conveniently, after she was released -- even though that's not how that works, and Mike Huckabee is a dumb asshole who has never even skimmed the Constitution, apparently.

Davis's fancy Liberty Counsel attorneys would no doubt prefer Davis say "Hell no!" to District Judge David Bunning's order that she may get out of the clink and return to work so long as she does "not interfere in any way, directly or indirectly, with the efforts of her deputy clerks to issue marriage licenses to all legally eligible couples." Davis's attorneys had suggested last week that she would not obey the court's order because she's so much more useful to The Cause if she's locked up in jail, like Martin Luther King, Jr. or Abraham Lincoln.

On the other hand, jail sucks. Kim Davis would prefer not to go back there, even if her imprisonment is the only possible way for her to obey her conscience and God's regulations of marriage in Kentucky. Or at least it was, as of last week. Good thing God changed His mind.