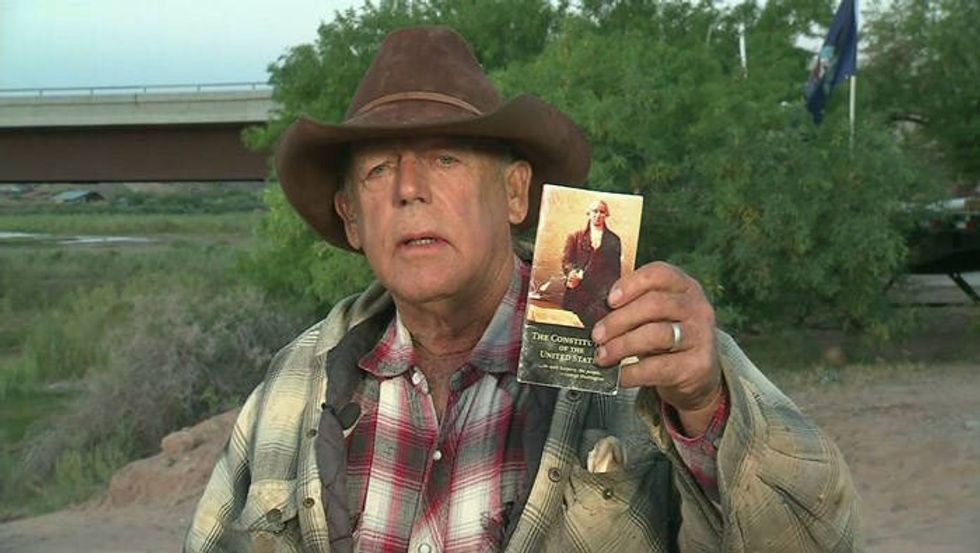 Turns out even idiots got constitutional rights

It's a great day to be a welfare rancher who refuses to pay his grazing fees and invites a bunch of armed lunatics to come prepare for an apocalyptic showdown with the evil federal government -- thanks to some seriously awful pooch-screwing by federal prosecutors, a federal judge declared a mistrial Wednesday in the case of Cliven Bundy, his sons Ammon and Ryan, and militia guy Ryan Payne, who were on trial for the 2014 standoff with federal agents near Bunkerville, Nevada. US District Court Judge Gloria Navarro ruled the prosecution had withheld important evidence from the defense, including the presence of snipers from the Bureau of Land Management, recordings of the Bundy ranch from surveillance cameras, and about 3000 pages of written reports, including a threat assessment saying the Bundy family wasn't dangerous.

Navarro pointed to assessments conducted by the FBI, the Southern Nevada Counter Terrorism Center and the BLM that said “the Bundy family is not violent” and that they “would probably get in your face, but not get into a shootout.”

The militia loons who flocked to the Bundy ranch from all over the country may have been another matter, of course.

Navarro set a new trial date for February 26, but first will hold a hearing in January to determine whether the government's misconduct was bad enough to warrant dropping the charges against the Bundys and Payne altogether. Both sides will have to file briefs by December 29 to argue for a new trial or a dismissal.

You might think the feds had a pretty easy case against the Bundys, what with all the video and photos of heavily armed Sheisskopf Korps guys taking up sniper positions and aiming at BLM officers, but as Mother Jones's Stephanie Mencimer detailed yesterday, federal prosecutors have had an almost uncanny ability to screw up their own case against Bundy and his followers. The guy might not be getting a boost from divine intervention, but government incompetence might achieve the same end.

One of the prosecution's central claims had been that the Bundys used “deceit and deception” to recruit gunmen to come to Nevada to defend Bundy from federal agents, portraying the Bundys' claims that the feds had the ranch surrounded with snipers as nothing more than a paranoid fantasy. Turns out, there were snipers, and surveillance cameras, but the prosecution had withheld that evidence from the defense. The really stupid thing about withholding those facts is that the presence of snipers still doesn't justify the Bundys' bringing in a freelance militia to threaten law enforcement:

Exasperated prosecutors filed a motion on Monday asking Navarro to limit the Bundys’ arguments to what’s actually allowed by the law. They argue that the Bundys’ self-defense claim is nonsense and not allowed under recognized legal precedent. Prosecutors are asking the judge to bar the Bundys and Payne from arguing before the jury that the BLM provoked them into violence.

The mere presence of officers enforcing a legal court order, the government argues, is not justification for a violent confrontation, even if they include snipers. “Whatever the term ‘sniper’ means to the defendants—it reduces to this: cops have guns and have specialized training, each of which is allowed,” the government’s motion says. “The government has no evidence, none, that snipers, or any other federal officer, used any force -- let alone excessive force -- against the defendants or anyone else. Neither do the defendants.”

That's a pretty good point. Problem is, the prosecution would have been in a much stronger position if they'd made it from the start instead of withholding all that evidence from the defense team and giving them an excuse to claim government perfidy.

As we say, go read the whole Mother Jones piece for more details of how badly the prosecution mismanaged what should have been a fairly straightforward case. The mistrial is yet another fuckup for the feds, who have so far failed to get significant convictions against the Bundys in either the Nevada standoff or the 2016 takeover of the Malheur Wildlife Refuge in Oregon. A few of the minor players have taken guilty pleas, and others have been convicted on some charges, but juries have also ended up letting many of the gunmen and other assorted crazies walk.

Oregon wildlife refuge occupier Ryan Bundy filed a bunch of nonsense legal paperwork declaring himself a 'sovereign citizen' who is not subject to the law. Oddly enough , he remains in jail.

Ryan Bundy, who's gone full-on sovereign citizen and believes he is subject only to God, not mere human law, was of course jubilant about the mistrial, since it proves God is on his family's side. He told reporters yesterday that his family's fight against the federal government is nothing less than the fulfillment of the "white horse prophecy," a bit of Mormon religious ephemera holding that Joseph Smith supposedly prophesied that Mormons would rescue the US Constitution -- which of course was inspired by God -- from some unspecified future crisis. Then everyone gets free guns and extra wives, we assume.

The LDS church has continually condemned the actions of the Bundy family and says that the white horse prophecy is not accepted doctrine and more akin to conspiracy theory.

But on Wednesday, Ryan Bundy spoke of the prophecy as truth: “Joseph Smith prophesied that the Constitution would at some point hang as if it were by a thread,” he said. “Put it this way: Whether the church calls it doctrine or not, we’ve got quotes from several prophets reiterating that. . . . I take the words of the prophets both modern and previous ones seriously.”

Guess we'd just better get used to the Bundys doing whatever they damn well please. They're on a mission from God.

Yr Wonkette is supported by reader donations. God has ordained that you will click here to send us money. Hop to it, sinners.