God Tells Alabama Town To Pull Up Its Damn Pants 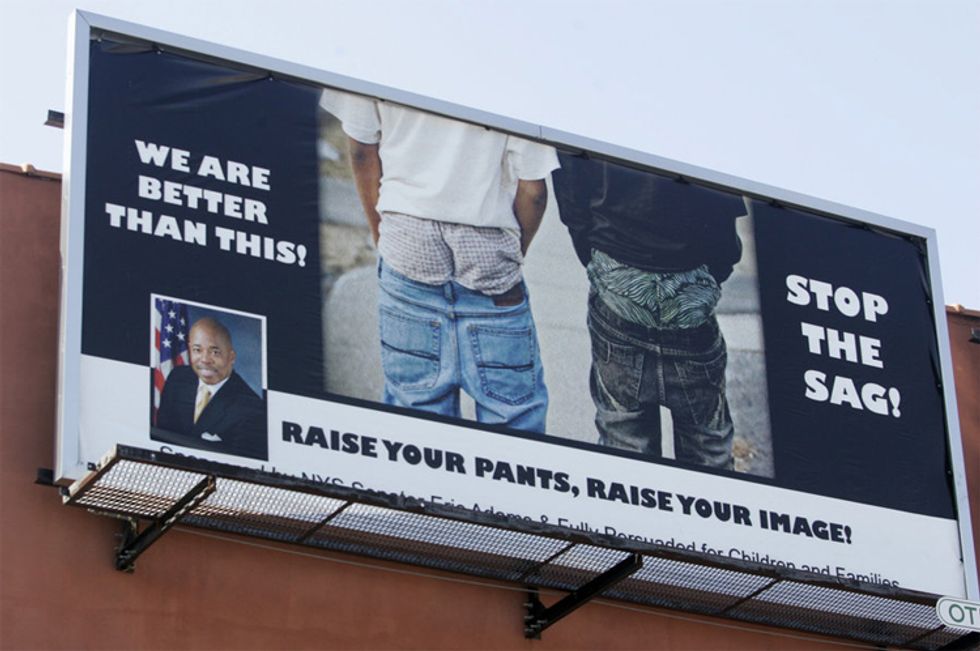 We don't understand this unreasonable fear of the Screen Actors Guild

God has a lot of things on His mind, from intervening in high school football games to stopping abortion by making Office Depot employees behave like dickholes, but unlike mere humans, He really can multitask. So it should be no surprise that He could spare the time to advise a couple of town council members in Alabama on writing an ordinance to bag saggy pants. And, for the sake of equality, women dressing like sluts.

Dadeville city councilor Frank Goodman told The Daily Beast that he issued an ordinance to prohibit “busting slack” after asking God how to handle the sartorial scourge ravaging his town of 3,200. The law might also banish short shorts and skimpy dresses, following a suggestion from a city councilwoman.

As we all know, saggy pants are Serious Business, because they promote criminality look horrible, and scar old white folks. It's such a serious problem that droopy drawers were outlawed last year in a Louisiana parish, as well as in Ocala, Florida -- which repealed the ban after the NAACP threatened to sue on the basis that the law would be used to target young black men (you don't say!). And a few years ago, a community organization in the Washington DC area started a drive to collect belts for wayward Yoots, since clearly the fashion trend resulted from rampant beltlessness. Even great washed-up baseball man John Rocker has spoken out, complaining that popular media are all too quick to lionize "a revered athlete or musician in all of his tattooed/graffitied glory with a fresh set of gold teeth and prisonesque clothing being arrested for one thing or another..." If a sensitive soul like John "I own a thesaurus and hate blacks" Rocker can be driven to such umbrage, then clearly we are in the grip of a full-on moral panic.

Councilman Goodman has been trying to ban saggy pants since he was first elected in 2008, but only this year was he finally successful, he told the Daily Beast.

“Seeing the young boys with pants hanging down, having to walk wide-legged, holding their pants up to keep them from falling down—now it’s gotten real bad,” Goodman said. “It’s something I couldn’t take no more.”

Thank goodness, God had some thoughts on the matter, which He shared with Goodman:

“I prayed and asked God to show me what I should do, and the way I should go about it,” Goodman said. “What would God do? Did God go around doing this?”

The councilman added: “He would show me this saggy pant -- it’s one of the things He did not do. It is not in His orders to do that to gain eternal life.”

Yr Wonkette would like to note that Goodman doesn't claim to have an actual God Quote on the proper alignment of pants and hips, more of a general sense that this simply isn't right. But he's also dead-on in his Biblical knowledge: There is not a single word in the Good Book suggesting that letting your pants hang low will get you into heaven. Mind you, as far as we can tell, trousers in the ancient world seem to have been more of a Persian/Scythian thing that your Israelites would have steered clear of, so we'll have to take Goodman's word on God's disapproval.

When Goodman introduced the saggy-pants ban, he explained that the ordinance was needed to instill respect for one's elders, and because young men in saggy pants won't ever get jobs, so we guess it's also an economic stimulus thing. Fellow council member Stephanie Kelley got on board, but suggested a corresponding ban on short skirts and excessively short shorts, to avoid "favoritism." She clarified her comments to the Daily Beast's Kate Briquelet:

“My comment was if they are going to point at the guys, they should point at the girls too,” Kelley said. “When you got on short shorts or a short skirt, leaving nothing to the imagination… it’s like you’re advertising.”

We will take it as a mercy that Ms. Kelley didn't follow that up with an analysis of what happens to gals who swan around town dressed like that. We should also add that she did not claim her opinions benefited from any divine inspiration, although you could certainly make the case that if He hadn't confirmed Goodman's anti-wide-stance stance, she never would have had reason to bring it up, so we'll give God credit for her insights, too.

Local opinion on the proposal is divided -- like the legs of a pair of pantaloons, one might say -- between supporters (Goodman is quite certain that most folks agree with him) and those who worry that the proposal makes the town look kind of silly:

One woman wrote on the local paper’s Facebook page, “This is getting some national coverage and not in a good way. It’s a good thing our city council is such a big joke because a lot of people around the country sure are laughing.”

Another resident fumed, “So many more issues... should take priority. Can we ban people from showing crack when they bend over too?”

We should note that the Daily Beast, attempting to stir up controversy, doesn't quote any of the supportive comments, like the gent who said, "If you show yr underwear in public it needs to be addressed" or a lady who wrote, "Good! Tired of seeing that crap. Have some damn Decency," followed by another who simply added "Glad!" So there truly is diversity of opinion in and around Dadeville. In fact, one commenter was disappointed that the ordinance was limited to Dadeville, adding, "I'm praying that Alex City pick up the law too just awful to see that anywhere its nothing nice about it." She did not report on the Almighty's response to her prayer, however. We imagine he'll send a tornado to Oklahoma as a sign.