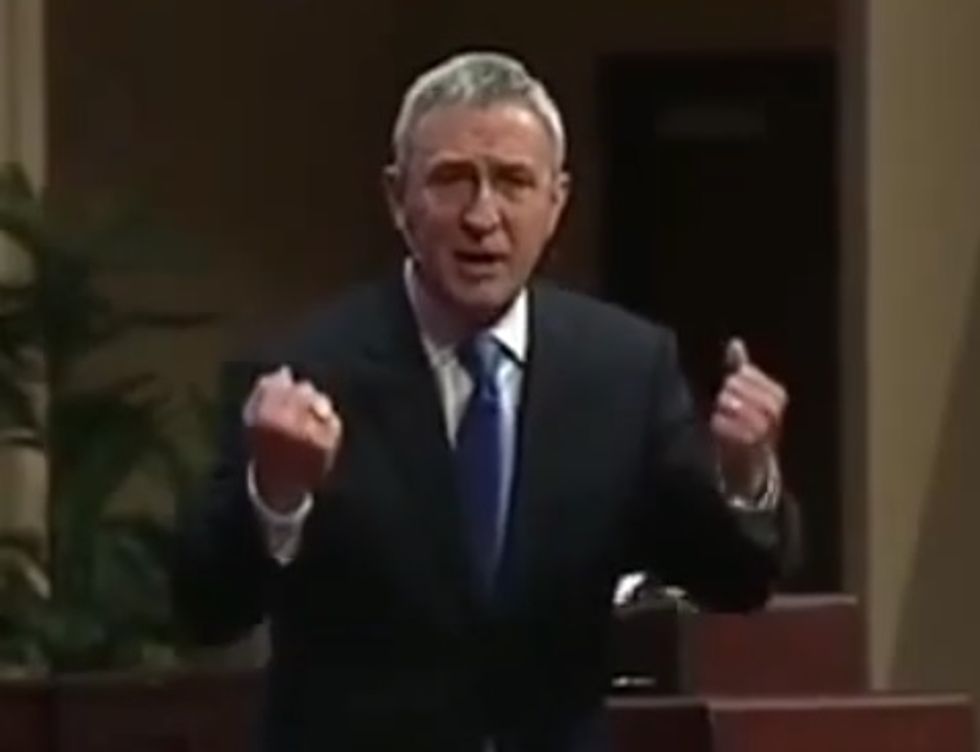 Friends, Dr. Craig Connor is one unhappy man. He is unhappy that Planned Parenthood is coming for your children and putting little baby parts up for sale on eBayBee. He told his congregation at the First Baptist Church of Panama City, Florida, that he simply cannot abide the fact that his tax dollars are going to fund something obscene and offensive that isn't a war, so he might stop paying his taxes so that no portion of them will go to Planned Parenthood. Worst of all, he's just discovered that "we have absolutely no choice in how our money is being spent. Friends, that offends me." Hey, pastor, now you know what it felt like to be a liberal when the Bush administration was spending a trillion dollars on the Iraq War.

Connor explained that the topic came up recently during one of his regular conversations with the Lord God Almighty:

“And honestly, I was talking to the Lord about this just the other day and I said, ‘Lord, I can’t continue this.’ You know if Planned Parenthood is not defunded, I just may stop paying taxes. I know that I’ll go to jail for it.”

“You want to talk about reducing the national debt?” Conner continued. “We could reduce it overnight if they would defund this evil organization and put it on the national debt. Man, we could get out of debt immediately.”

A source close to Yahweh, the Lord of Hosts, tells Yr Wonkette that the Creator replied, "Dude, you need to study math harder," then rolled His eyes and made that up-and-down wanking gesture with His hand, that didst form the universe.

RawStory duly notes that Pastor Connor gave short shrift to the accounting details, and "did not explain how reducing Planned Parenthood’s annual $540 million in federal funding would cover the over $18 trillion of total outstanding public debt." It could be one of those loaves and fishes things.

Connor explained that Planned Parenthood fits the "Bible definitions" of certain words: "It's evil, it's wicked, it's ungodly, it's hellish, it's shameful. You look up the Bible definition of all of those words, and those words will describe exactly what Planned Parenthood is." We weren't aware that there even was a Book Of Lexicography! We were hoping Connor would clarify whether it was in the Old or New Testament, and also provide a Bible definition of "tautology," but we were again disappointed.

Connor also explained that the organization's federal funding -- which already goes only to support non-abortion services -- has to be terminated because of an analogy: “It must go because Planned Parenthood is to children what ISIS is to Christians. It’s an extreme threat.” By this, we suppose he means that Planned Parenthood seeks to impose a Sunni Caliphate and eliminate all Shiites as well, which isn't in their mission statement. We looked on their homepage, and it's not even mentioned once.

The pastor was also outraged that, after the release of the misleadingly edited videos claiming that Planned Parenthood sells baby parts on a stick for profit, possibly from a banana stand, the Justice Department launched an investigation not into Planned Parenthood, but into the group that made the videos.

Friend, where is the justice in that? There is no justice in that! And if they really want to do a thorough investigation, I would suggest that they need to investigate God. I am no prophet but I believe with all of my heart -- and it’s my personal opinion -- God is the one that has revealed these videos to give America one more chance to repent of the infanticide that is happening in our country. It wasn’t men who came up with this idea to reveal what was going on. I believe God was the one that exposed it.

This seems doubtful, according to sources familiar with the bronze-age Deity, who reportedly prefers to communicate by means of burning bushes or direct intrusions into the minds of His Chosen messengers. Speaking on condition of anonymity, a source in the God administration confirmed that while the Almighty remains omnipotent, video technology is not His thing, and His VCR clock reportedly just flashes 12:00 all the time.