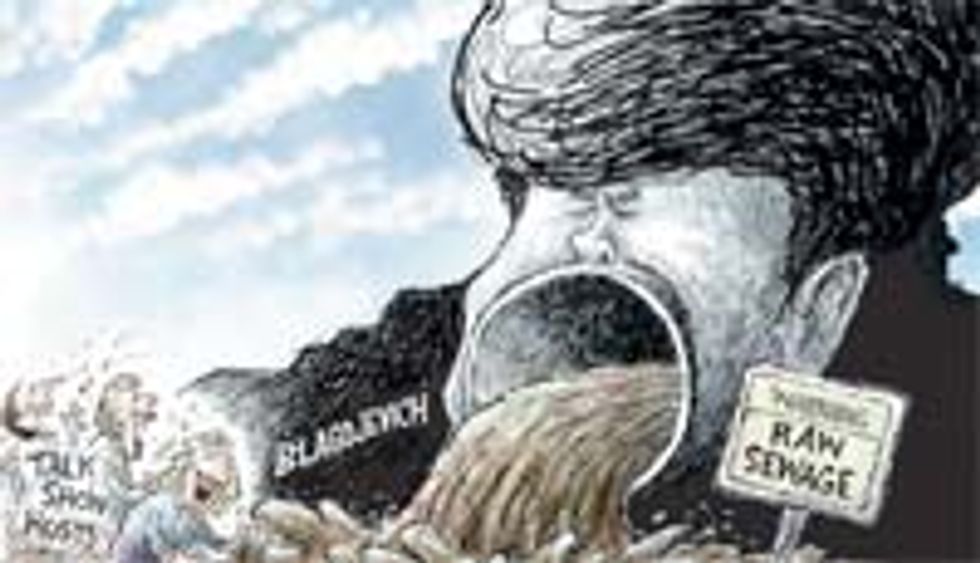 By the Comics Curmudgeon
So did you hear that Rod Blagojevich, America's noblest, most sexually potent governor, was removed from office yesterday, because of racism, or maybe jealousy over said sexual potency? Everyone loved Blago -- minorities, poor people, what have you -- but nobody loved the lovable lug more than America's political cartoonists. Why was that? Was it his noble struggle against impossible odds, which reminded them of themselves? Was it his transparent scumbaggery, which allowed for a disdainful bipartisan free-for-all? Was it the hair? It was probably the hair.

Here is a fine metaphor for Blagojevich's removal from office by the dastardly Illinois Senate! He is being pulled offstage by a giant hook, as if he were an act in one of the vaudeville acts of yore. Yet there is a problem with this image; vaudeville, for all its manic intensity, was informed by a certain ethos of human decency wholly lacking in this entire sorry saga. No, a better analogy would be the sordid world of the traveling freak show, in which sorry specimens of broken humanity would be paraded in front of jeering, taunting audiences, for money.

Here is another excellent metaphor! Blagojevich is depicted as some sort of giant statue-thing with an obscenely distended mouth, out of which is flowing a veritable river of human feces. Then there are three tiny people labeled "talk show hosts" who are frolicking and laughing in the shit-river, and even dipping their hands in it and splashing each other. The intended meaning is that Blagojevich is full of shit and the talk-show hosts who had him on their shows were willing to roll around in the filth! This is what passes for subtlety in political cartooning.

Hey, you know what would be awesome? If instead of just one Blagojevich, there were three of him, and after the Senate removed him from office, this Pat Quinn character, who's just been chillin', stone cold lieutenant governing, and claiming very loudly not to be Rod Blagojevich, took the oath of office and then ripped off his latex mask and really was Blagojevich after all, and he shouted "Psych! Now who wants to buy some motherfucking state offices? Oh, also, there's a third one of me out there, somewhere, so don't bother impeaching me again. We're going to go on a '50s-style panel show together!"

No, seriously, I have no idea what the hell this cartoon is supposed to be about.

This one I totally understand though. It's a scene from the popular '80s children's show, Corrupt Governor Babies, in which Li'l Rod Blagojevich is about to beaten senseless with a huge slab of wood! It's OK to abuse children in cartoons, because they can't really feel it.

Have you ever known one of those people who are always ranting about how things they don't like are being "shoved down my throat", and by "shoved down my throat" he (it's usually a he) means "are allowed to exist," and for some reason these things involve homosexuality more than half the time, and you think to yourself, "Gee, when you put it like that, it sounds kind of gay?" Well, uh, this cartoon, in which Rod Blagojevich forces a terrified, gagging Harry Reid to fellate a Roland Burris-shaped butt plug, will not disabuse you of that notion.

After Blagojevich was stripped of office, the Illinois constitution dictated that he also be stripped of his clothes and have his hair -- the source of his magic powers -- shaved away in act of ritualized humiliation. He must spend the next year of his life begging on the streets of Chicago as a mendicant. This punishment was intended to be fatal, because it is very cold in Chicago; but the framers of the Illinois constitution did not count on the warm, glowing power source that is Rod Blagojevich's self-love. He'll be fine, motherfuckers. He'll be just fine.