GOP Finds Stock Photos To Be Their New Black Friends 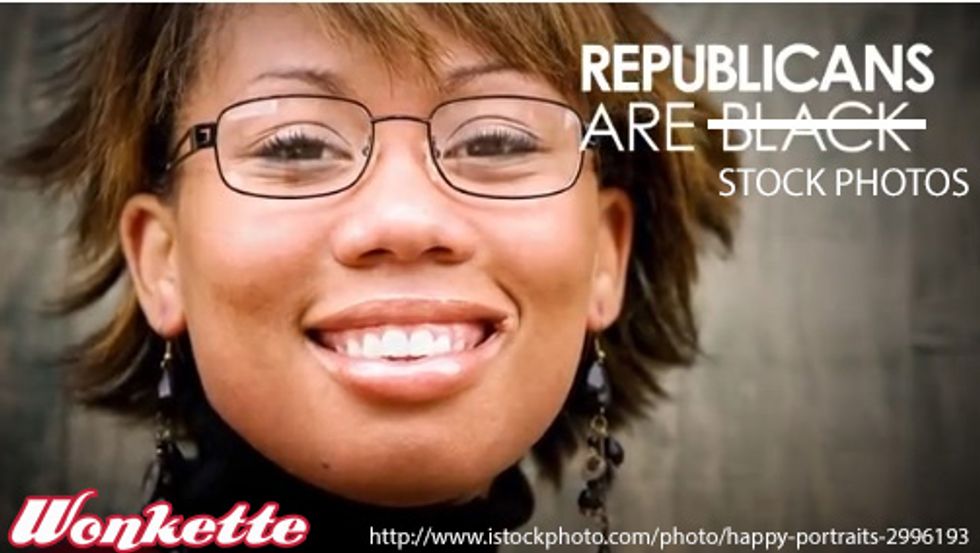 Republicans have a race problem, and continue to do everything they can to make it worse. Most recently they launched the thoroughly mockable #ImARepublican campaign, which turns out to suck even harder than Rick Santorum at Iowa’s annual goat-blowing festival:

As crummy as the “Republicans Are People Too” ad is, you would think that at a minimum, it would feature actual people who are actual Republicans. You would be wrong.

Turns out that the ONE BLACK PERSON featured in the ad is actually a stock photo. In all of Real America, Republicans could not find one black woman willing to go on camera? For serious, GOP?

The Daily Banter has a great list of other occupations and interests that this stock photo “Republican” woman has, ranging from being a lawyer, an office assistant, a mentor, an engineer, and a supporter of payday lending. Quite a resume!

We all know that the GOP has a race problem. It could be due to the fact that there is a Kenyan Socialist in the White House. But more likely, it is because Republicans around the country are systematically disenfranchising black voters and sending racist emails forwarded by that goddam uncle with that lingering whiff of whiskey and class resentment. Or maybe black people (along with Hispanics, young women, unmarried women, women of color, gay men, gay women, and all sentient beings) have paid attention to recent voting patterns of Republicans on issues like voter suppression, immigration, the minimum wage, fair pay for women, reproductive health, and gay marriage.

Maybe the GOP should try finding actual Republicans, like these!