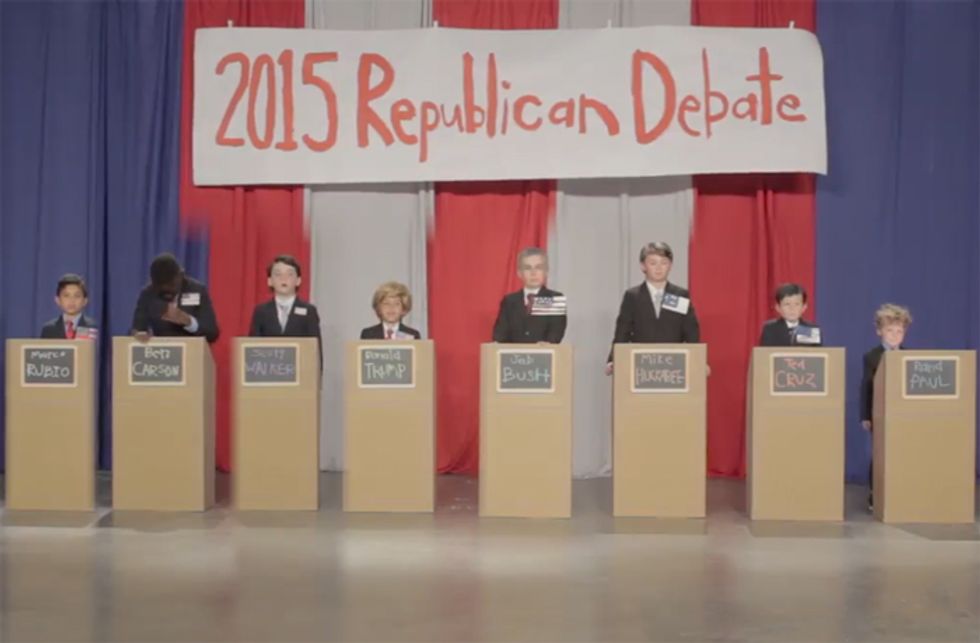 This is of course ridiculous. Fluttershy wouldn't even make it to the stage.

Thanks to some weirdass combination of math and poll-skewing, Fox Business Network (Motto: "Just As Loathsome But With Lower Ratings") announced some major shakeups in the lineup for the next Republican debates. Yes, the seating arrangement for the clown car has been significantly revised! (We'd say that Ted Cruz called "shotgun," but we've got plenty of Deleted Comments this week already.) The biggest changes are that Chris Christie and Mike Huckabee have been demoted to the "Kids' Table" debate, and that Lindsey Graham and George Wossname (a rare species of emu, we believe) have been polling so spectacularly poorly that they didn't even get included in the undercard debate at all. Bobby Jindal, despite his similarly dubious metaphysical claims to continued existence, miraculously managed to stay in the lower-tier debate, possibly due to a rounding error or perhaps a Fox Business intern with a cruel sense of humor.

Christie did his best imitation of statesmanlike calm at the demotion, tweeting "Give me a podium and I’ll be there to talk about real issues like this" -- the "this" being drug addiction, the topic of a viral video featuring Christie actually talking sense about about the need to address addiction with treatment, not punishment. Huckabee said he's "happy to debate anyone, anywhere, anytime," probably to explain why his demotion is proof Christians are the most persecuted group in America.

Lindsey Graham's campaign was appropriately indignant, expressing shock that he would be so ill-used, for heaven's sake:

We are sincerely disappointed in FOX Business and the Wall Street Journal’s decision to use the NBC/Wall Street Journal poll that only listed ten candidates as options rather than the full field," said Christian Ferry, Graham's campaign manager and a prime mover in this past Sunday's meeting of candidates over the debate rules. "It is ironic that the only veteran in the race is going to be denied a voice the day before Veterans Day."

Don't you even care about the Troops? Graham was reportedly despondent over missing out on another chance to call for a shiny new war in Syria. Earlier in the week, Graham had vowed to stay in the race until he made it to the main stage where he could confront Donald Trump and ask him tough questions:

"I'm going to stick to what I'm doing. I've always thought that using national polling this way has been ridiculous. I just want to turn to Donald Trump, before this campaign is over, and say: 'Tell me what you're going to do in Syria. Tell me how you're going to build a wall on the border.'"

And how are you going to build a wall in Syria, huh, while President Graham is bombing all around you? Charlie don't gamble!

George Pataki probably felt slighted, too, but we didn't bother looking for what he said. Probably something about how he was governor of New York on 9/11.

Yr Wonkette will of course be liveblooging the Fox Business Network debate, which will at least be streaming free-for-nothing on the interwebs Tuesday, unlike those cheapass skanks at CNBC. How best to prepare for the debates? As your livebloggers, we advise you to take a hit out of the little brown flask in our shaving kit.