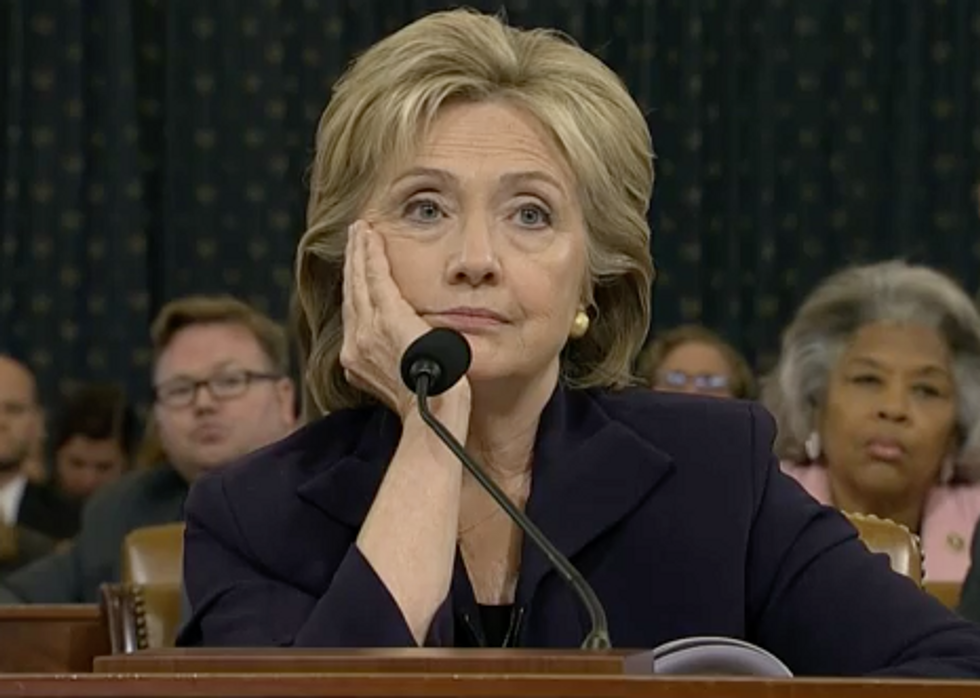 She's not in this story anymore, which is the point.

Want to hear something really, really rich? Because this is effing rich. Three Senate Republicans, Dean Heller, Ted Cruz and Little Marco Rubio, have introduced a bill (S. 11) called the Jerusalem Embassy and Recognition Act. You know, it's that thing that Republicans bring up time and time again, about how our U.S. American embassy in Israel should be in Jerusalem, not Tel Aviv, where all the embassies are, because let's just say the whole "Jerusalem" issue is a touchy subject in the Israeli/Palestinian fight. But American wingnut Christians want it in Jerusalem, because they're such Orthodox Jews. Haha, kidding, they want it in Jerusalem because #BibleProphecy and #Armageddon and oh hey, who's that coming back from heaven to burn everything down and scoop all the True Christians to safety? IT'S JESUS, HEY JESUS, WHAT'S SHAKIN', JESUS?

Anyway. So, as Diplopundit explains, this bill has come up many times, and it usually includes provisions to deny the State Department funding, until they get out a hammer and a nail and build the embassy in Jerusalem. It usually denies funding for "Acquisition and Maintenance of Buildings Abroad." But this time, it's different! In this Congress, the bill would deny the State Department funding for EMBASSY SECURITY, YES WE SAID EMBASSY SECURITY, you know, the stuff that's designed to prevent BENGHAZI!!!!!1111!!11!!!!!!!

Ahem. From the bill:

Restriction on Funding Subject to Opening Determination.–Not more than 50 percent of the funds appropriated to the Department of State for fiscal year 2017 under the heading “Embassy Security, Construction, and Maintenance” may be obligated until the Secretary of State determines and reports to Congress that the United States Embassy in Jerusalem has officially opened.

As Diplopundit notes, it would also restrict funding for 2018 and 2019 "except for the embassy in Tel Aviv until its relocation." This could take a while!

Guess it's OK if FOUR DEAD AMERICANS happens when A) it's to fulfill Jesus's wishes for Israel and 2) Hillary Clinton is out of the picture, which makes it #NoFun to spend millions of dollars on millions of investigations into why FOUR DEAD AMERICANS happened. It almost makes us think just maybe Republicans didn't actually care about what caused the BENGHAZI!!!!!!!!1!!!11!!! attack, and just wanted to fuck Hillary in the ear as hard as possible. Oh wait, we remember that time House Majority Leader Andrew McCarthy ADMITTED that the point of the endless Benghazi investigations was just to hurt Hillary.

Diplopundit also too wonders whether these senators actually care about FOUR DEAD AMERICANS, the ones in Benghazi, or who might get killed in the future if this bill became law:

So with only half the embassy security funds obligated, what happens to our 275 posts overseas? Half gets the funds and the other half doesn’t? Reduced funding across the board? Do these good senators realized that the unfunded parts could get Americans killed? They don’t know? How could they not know? That leaves us with two troubling guesses — that they know but don’t care, or that they know this bill won’t go anywhere but its worth squeezing the juice, anyway.

Let's split the difference and go with Republicans Are Craven Assholes. And hey, maybe this bill still won't pass, but we should note that Trump wants to move the embassy to Jerusalem, and Congress is fully Republican. SO!

Speaking of our embassies, there is news out that the Trump team has ordered all of Obama's "political" ambassadors (the ones who got their posts because they're donors, etc.) to GTFO of their posts by Inauguration Day, which, as the Washington Post explains, means some of the most important ambassadorship positions might be empty for a while, leaving career foreign service officers to keep the seats warm until Omarosa and Sarah Palin and Kanye West and Satan are confirmed by the Senate. Usually, even "political" ambassadors are granted some leeway, like for instance to allow their kids to finish the school year at their diplomatic posts. But Trump is an asshole with an axe to grind, so he wants ALL the Obama people out RIGHT NOW.

So if that Senate bill passes, embassies could have reduced security and no ambassadors, which would make them easier targets for ISIS or, you know, if we were going to put on our tin foil hats, for Vladimir Putin's FSB to make some convenient attacks happen, to help his boy Trump get the American people (who hate him) to fall in line.

What? It's how Putin solidified his power. ("Allegedly.") And the U.S. intelligence community sure as hell isn't going to give Trump that sort of clandestine reach-around, so is it so unreasonable to think Trump's BFF might help a buddy out?