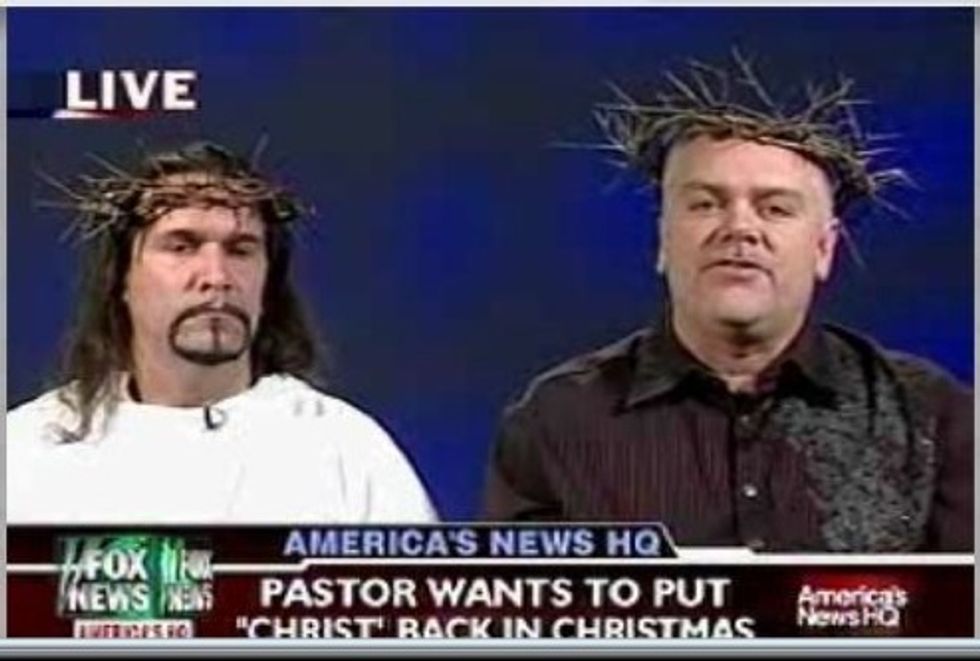 After last night'sdelightful Republican debate focusing on the three important issues facing all Americans -- making birth control illegal, cutting taxes for the richest 1%, and savagely persecuting the impoverished Mexican laborers who have mostly stopped seeking work in the U.S. since the economy collapsed -- a few "moderate" GOP leaders are suggesting maybe 2012 is going to be a comical repeat of Election Day 2008, when Republicans were stomped out of the White House, Congress and many state offices. “It’s important that voters see a Republican Party that is inclusive and is not exclusive,” Eric Cantor says. Uhh, was Eric Cantor replaced by a human?

Ha ha, of course not. He's just terrified because the Republicans are so full-tilt wacko this year that they'll be lucky to keep "safe seats," let alone a House majority.

The Politico has apparently noticed that the past half year of GOP presidential campaigning has been insane:

GOP leaders are watching with rising dismay as the 2012 presidential campaign has featured excursions into social issues like contraception and a sprint by the candidates to strike the toughest stance against illegal immigration, issues they say are far removed from the workaday concerns of the independent voters Republicans need to evict Barack Obama from the White House.

Why, that's almost common sense. What is that doing in the conventional wisdom trade magazine cliche we have all come to know and despise? Don't worry, it's followed by this:

As recently as 2010, when Republicans elected historic numbers of women and minorities to high office, a permanent expansion of the conservative coalition looked within the realm of possibility to party strategists.

Let's see, almost every election cycle with big wins for one party sees big ones for the other party in midterm elections. Why does this continue to baffle people who spend their entire lives following politics and writing about elections? And why does this common reactionary cycle -- one party consolidates power, other party motivates base because the Enemy has consolidated power -- repeatedly get described by political pundits as evidence that "Americans like divided government"?

The answer is, as always, "because people who work in politics are amoral idiots." [Politico]