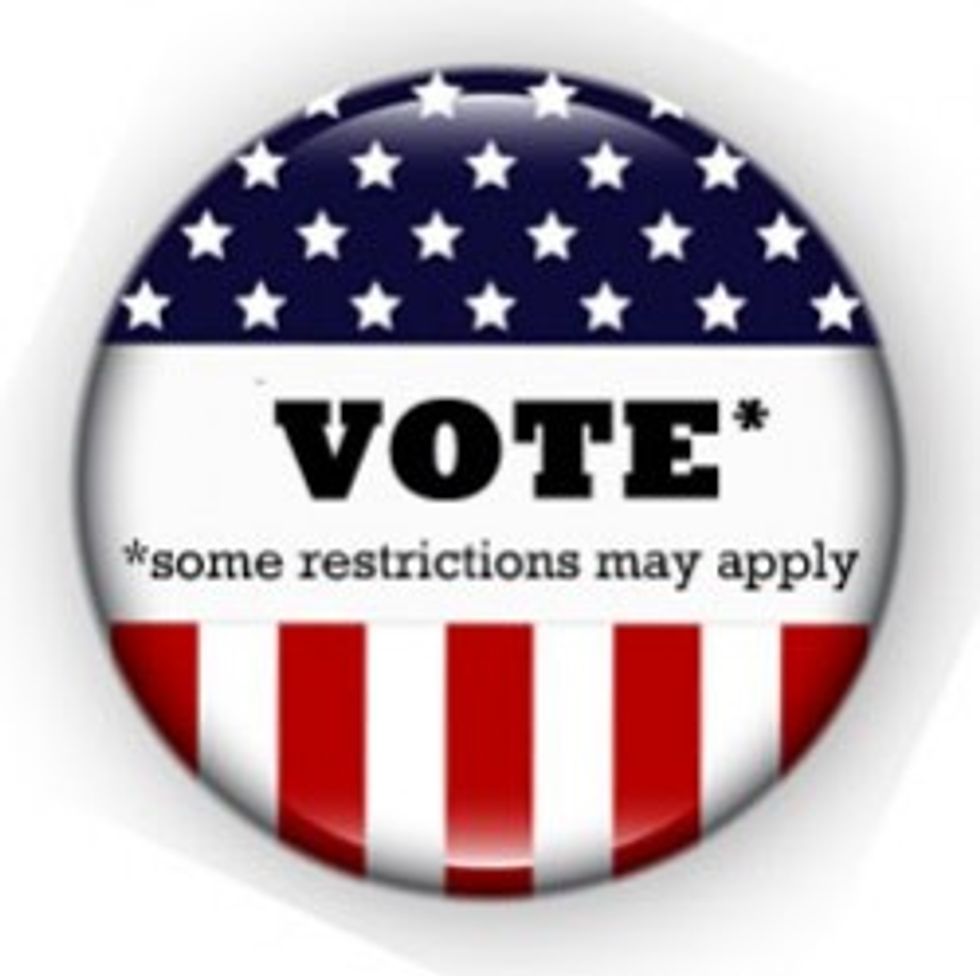 At a Heritage Foundation luncheon, one of the GOP's chief proponents of Voter ID laws, formerWall Street Journal columnist John Fund, cheerfully acknowledged that laws requiring individual voters to show a photo ID will be far more effective at suppressing votes by Democrats than Republicans.

“Absentee vote ballot fraud is the tool of choice amongst fraudsters,” Fund told a group of bloggers munching on Chick-Fil-A at the conservative Heritage Foundation on Tuesday. “Everytime you see a truly massive, coordinated effort at voter fraud, it usually relies in part on absentee voter fraud.”

While lacking any examples of actual massive, coordinated efforts at either in-person or absentee voter fraud to support his claim,* Fund admitted that Republicans' focus on voter ID may suppress voting by Democrats:

“I think it is a fair argument of some liberals that there are some people who emphasize the voter ID part more than the absentee ballot part because supposedly Republicans like absentee ballots more and they don’t want to restrict that,” Fund said. “But the bottom line is, on good government grounds, we have to have both voter ID laws and absentee ballot laws.”

We should perhaps be relieved that Fund would like to make voting more difficult for everyone, for good government reasons. If fewer people voting means better government... no, let's not finish that thought, it is too depressing.

Readers may also be astonished to learn that Fund has a book for sale! We will not link to it, because we're just that mean. He and his co-author, Hans von Spakovsky, also downplayed the recent Brennan Center report that suggested that voter-ID laws would suppress the votes of a half-million Americans:

It is not yet confirmed whether Fund accompanied this statement with an up-and-down motion with the fingers of his right hand curled, but we currently have no reason to think that he did not.

In other election-stealin' news, GOP chair Reince Priebus weighed in on the question of early voting in Ohio. (As we all should know by now, the reality is that until last year, all Ohio voters could vote early. Then the GOP passed a bill taking away early voting for everyone but members of the military. Now the Democrats are suing to get early voting reinstated for everyone, and the GOP is claiming that the Dems hate the military and don't want them to vote. Yes, exactly.) Now that fact-checking stories are making it impossible for Republicans to claim that Ohio Dems are trying to restrict military voting, Priebus found a new way to depict returning early voting to everyone as a slap against The Troops:

We share Alec MacGillis's mind-bogglement at what Priebus appears to be admitting:

Wow. So, expanding voting rights generally -- which, let's face it, tends to favor Democrats -- "waters down" the votes of a Republican-leaning constituency like the military? I may be mistaken, but this seems like a case of accidental and illuminating candor, right up there with the Pennsylvania House majority leader who declared recently that his state's new Voter ID law would win the state for Mitt Romney.

*A bit of searching turned up a dirty election in Greene County, Alabama in 1994 that is the sole example that Heritage tends to cite; for some reason, fans of voter suppression are far less likely to mention another example of massive absentee fraud, the 1997 Miami mayoral election, in which Republican candidate Xavier Suarez won on a tide of absentee ballots from people who turned out to be homeless, incarcerated, or dead.