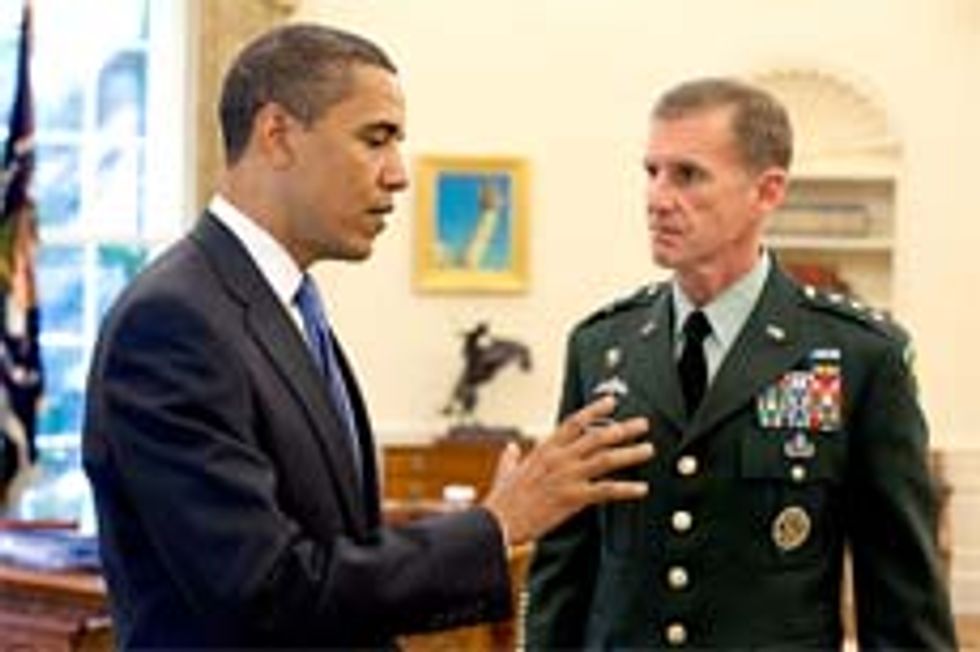 The biggest story in the political universe this morning (other thanTim James' concession, natch) comes to us courtesy of Rolling Stone magazine, which is apparently still being published! One of their dogged reporters was taken off the crucial Third Eye Blind beat to go to Afghanistan and hang out with the upper echelons of the officer corps there, only to discover that these he-man military guys liked to make fun of the recently elected liberal administration! Find out what extremely rude thing they said about Joe Biden -- Joe Biden! We thought every last living human loved Joe Biden! -- after the jump.

Here are the mean things McChrystal and his posse of war-fighters said and did, as excerpted by the liberal media: they said Obama was "uncomfortable and intimidated" during a meeting with a bunch of generals; they called National Security Advisor James Jones a "clown" who is "stuck in 1985"; they called Richard Holbrooke, the administration's Afghan-Pakistan envoy, a "wounded animal" and "dangerous," because he might get fired soon; they don't think much of Karl Eikenberry, the ambassador to Kabul; they referred to the prospect of meeting with a French government official as "fucking gay"; and when someone brought up Joe Biden, McChrystal said "Are you asking me about Vice President Biden? Who's that?" and then one of his aides said "Biden? Did you say 'Bite me?'" HA HA GET IT BECAUSE IT SORT OF RHYMES!

Here's what they don't do: disagree on any substantive policy or war-fighting issues, really! It seems to mostly be just a big workplace clash of personalities, except the "workplace" is a nightmarish war zone where thousands of people are dying and maybe we should be acting like fucking grown-ups, especially when talking on the record to reporters at national magazines. Anyway, Barry is pretty pissed because this all makes him look wimpy so McChrystal is flying back to DC right now to be extensively yelled at and/or fired.

But hey, at least Rolling Stone comes out looking pretty great in all this, right? Pageview bonanza! Uh, except, as our soul mates at The Awl point out, the article isn't on Rolling Stone's website because Jann Wenner hates and fears the Internet, and the actual paper magazine isn't on newsstands yet, and probably won't be until everyone has lost interest in this story! (The Politico had a PDF version up at one point, but had to take it down; The Awl has a fair use excerpt.) If you want to enjoy Rolling Stone's fine reporting today, check out this article about the death of Slipknot's bassist instead. [NYT/WP]