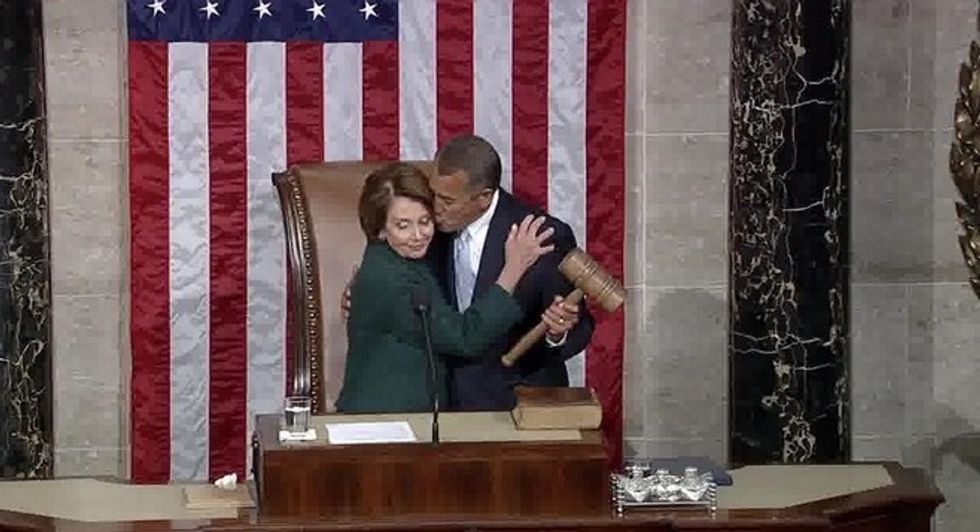 America's sweetheart, John Boehner, vanquished his enemies on Tuesday afternoon, retaining his cartoonishly oversized gavel and kicking off another two years of publicly losing control of his caucus.

In addition to avoiding Steve Scalise whenever there's a camera around, Boehner will have to contend with an increasingly restive tea party faction that has been pushed to the brink by Boehner's traitorous reluctance to shut down the government over policy squabbles with President Obama.

There were 25 Republican votes against Boehner, including three for the head of the failed insurrection, Louie Gohmert, one for Sen. Rand Paul, and one for former Secretary of State Colin Powell.  Those 25 included Dave Brat, the Virginia Republican who came from nowhere to knock off Eric Cantor in his primary and create a hole in the House GOP leadership, making it all Brat's fault that anyone cares what Steve Scalise did in 2002. Brat is the root cause of most of Boehner's heartburn going into the 114th Congress, making his gesture in voting for back-bench congressman Jeff Duncan over Boehner all the more meaningful.

But let us not think of these things today. This is a day of celebration! We wish you the best of luck in your next term, Speaker Boehner. We knew you'd pull through. We just have to go delete our GOHMERT DEFEATS BOEHNER posts before they accidentally go live.