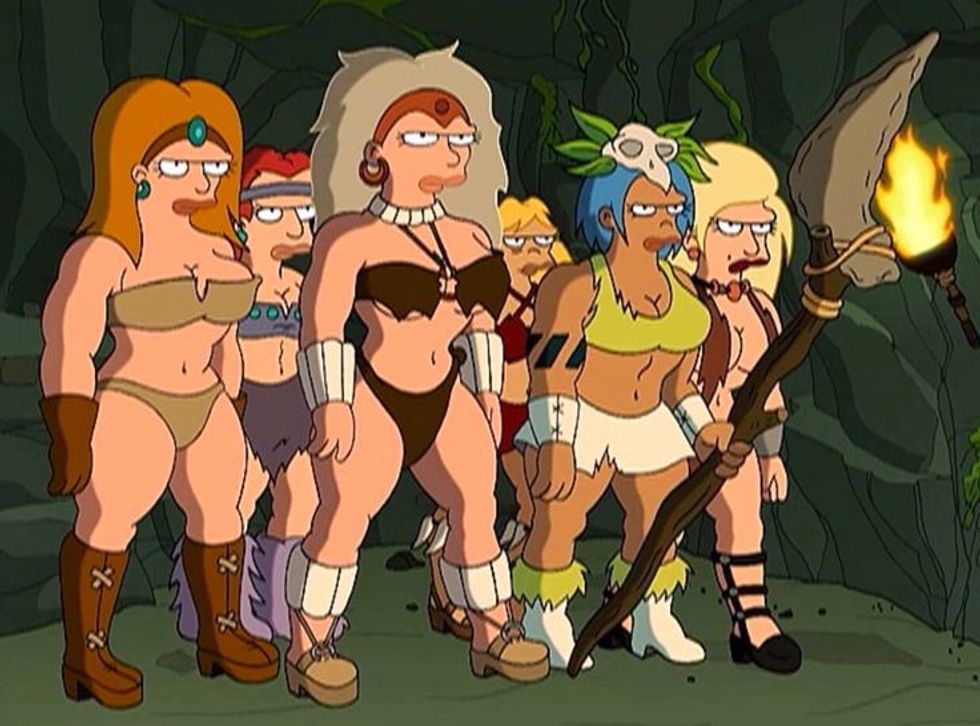 All that snu-snu really will kill men, marriage, and love itself, turns out.

Oh, look, it is yet another book here to explain that people, particularly women, who like sex a lot but do not tether their sexuality within a religiously-approved marriage, are really shallow and unable to experience any real joy in life outside their own selfish orgasms. This time, though, it's not merely a moral scold telling us that: It's a sociologist, Mark Regnerus of the University of Texas, who brings some data to his moral scolding in the boffo new anti-boffing Cheap Sex: The Transformation of Men, Marriage, and Monogamy. It made a heck of an impression on confirmed Junior Anti-Sex League member Rod Dreher, whose fan letter at The American Conservative is titled "Liberal Women Are Lustier."

Regnerus did an interview in the National Catholic Register in which he lays out his thesis: Easily available sex, especially high-quality online pornography, has made men unwilling to do the hard work of being responsible breadwinners and faithful husbands that was once needed to be in a relationship and obtain the sex (and love! especially love!) of a good woman. Women's increasing willingness to "have sex like men," without emotional attachment, had also cheapened sex and made everyone miserable. We're oversimplifying, but only a tad. Here's Regnerus:

In brief, pornography is cheap sex — the cheapest, really. It undermines women’s ability to “charge more,” that is, to expect better treatment, more wooing and greater relational investment from men.

Also, online dating has made relationships cheap and disposable, like the kleenex men blow their loads in rather than finding a nice gal at the church social:

The way it’s organized and distributed functions to treat human beings as rankable commodities and to speed up our ability to circulate through them. This is how online dating works. It can be navigated for good, but it really can’t be reformed in its baseline principles. It cannot reclaim the mating market that contraception has confounded and cheapened.

All fine and well, and every bit as true as any other moralizing generalization about Other People Fucking. There's more, but that may wait for another day, like Never. We're more interested in Rod Dreher's turgid partisan reaction. He thinks this is some incredibly hot stuff, because Regnerus explains that for liberals, politics and sexxytimes have become inextricably intertwined:

With regard to sex and sexuality in America, being politically liberal tends to mean valuing sexual expression as a good-in-itself, not only as a means to an end or contingent on the context (such as being in a relationship or being married). Talk of “sexual health” is also more common among them and typically takes acts of sexual expression for granted. In this perspective, it is a moral good to express one’s sexuality in actions of one’s own free choosing. Pleasure is reached for and should be. In keeping with this, liberal women are more than twice as likely as conservative women to report past-week and past-day masturbation.

Hand check! We bet a lot of you filthy degenerates were playing "polish the pearl" right now, weren't you??? Even worse, liberal women have given up on God, and in fact are unable to even find any meaning in their children, because all they ever think about is sex, and maybe old Sparks songs. Dreher apparently was worried about too much blockquoting in a single brief article (honestly, the thing is virtually all text from Regnerus, plus Dreher exclaiming "I NORITE?") so this time he photographed the passage he liked:

If you don't have God in your life, then of course the only substitute is orgasms, and that's all you find meaning in, you empty, empty husks of people. Oh, sure, you may pretend you love your kids and careers and little kittens and find them fulfilling, but really, you're just an orgasm addict.

Ultimately, the real reason young women are fucking so much more and enjoying it less is only partially that they've been seduced by the wiles of liberalism, but that they've lost God, their way, their virginity, and their own sense of special-ness. Really! The numbers can't possibly lie:

[Regnerus] crunched the numbers to account for religious service attendance, importance of religion, “and a unique measure of having become less religious in the past decade” to see if the hypothesis could be grounded in data. What he found was that among young adult women, it’s not really political liberalism that correlates with wanting more sex (no matter how much one is having), but rather one’s loss of religious belief.

So why don't all you hoors get straight with God and stop it with your pagan worship of your own hoo-has, and maybe you'll be able to hook a good man and have a reliable provider, OK? There's no way the boys will want you if you're easy. Maybe, if you just look to Heaven, you'll finally stop being miserable.

And stop giggling. It's not funny, and you really are miserable. Stop fooling yourself. Also, this is your OPEN THREAD!

Let's All Laugh At The Christianist 'Sociologists' With An Actual Sociologist Who Is Not Dumb!

UPDATE: Oh, lordy, we need to remember to do a brief Wonkarchive Search on any wingnut we mention, ever. We had no idea that Mark Regnerus was also the cuntbubble who published some utterly specious research claiming that gay parents do parenting bad, and which was used in Michigan court cases involving the state's bans on gay marriage and adoption. So, yeah, here he is making more ill-supported bullshit claims, IMAGINE THAT. Thanks to the multiple Alert Wonkette Operatives who called attention to that in the comments, which we don't allow.

Yr Wonkette is supported by reader contributions. Please click here and send us some money. Mama needs a new shawl.