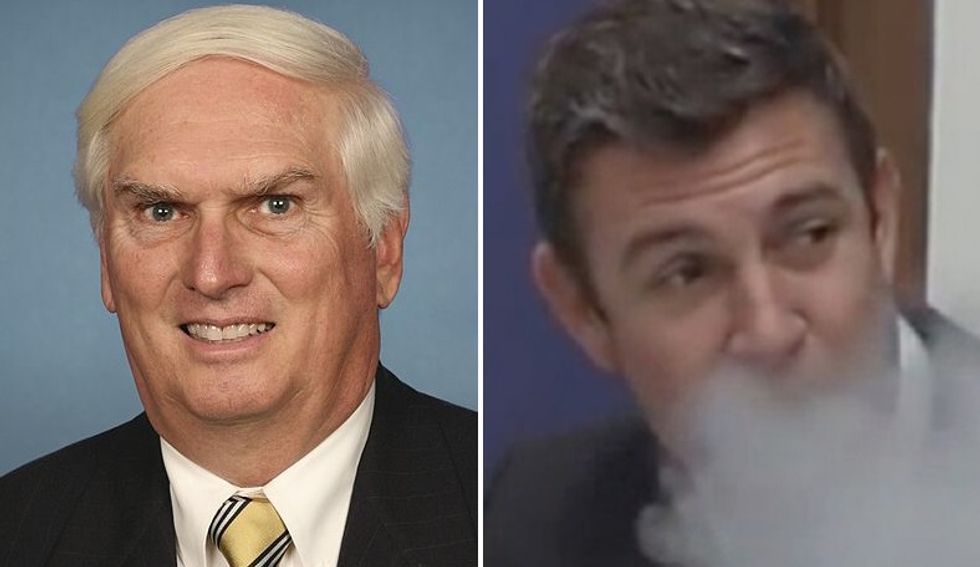 Frankly, they both look kind of high

Yr Wonkette has had no end of fun tracking the campaign-money shenanigans of US Rep. Duncan "Rabbit Transit" Hunter (R-Party Down) a member of the "bros caucus" who's been investigated for all sorts of fun, grifty expenditures of campaign funds on personal use, including, yes, spending $600 on an airline ticket for a pet bunny rabbit, but also blowing money from a campaign credit card on video games, private school tuition, and dental work, among other stuff. So we were ready to have another laugh at Hunter when we half-read a story description about a GOP Representative named Duncan who was in hot Ethics Committee water for misusing PAC money on "personal expenses, including gifts, travel, club memberships and private events such as bridal lunches and baby showers." Gosh darn it, Duncan, you scamp! Excepting it turns out this Duncan is a whole 'nother guy, congressman John J. Duncan from the Great State of Tennessee:

Duncan might have broken House rules and federal law if he misused political funds, the Office of Congressional Ethics, an independent ethics monitor, said in a detailed 57-page report.

“If Rep. Duncan converted campaign funds from Duncan for Congress or the Road to Victory PAC to personal use, or Rep. Duncan’s campaign committee or leadership PAC expended funds that were not attributable to bona fide campaign or political purposes, then Rep. Duncan may have violated House rules, standards of conduct, and federal law,” the OCE said.

In a convenient bit of timing, the Tennessee Duncan, who's been in Congress since 1988 somehow, had already announced he wouldn't be seeking another term in the House. And wow, do his attorneys have a creative defense for all that spending: You see, any possible wrongdoing occurred without his knowledge, so he "cannot be held responsible." What's more, in a 37-page letter to the Ethics Committee, the lawyers offered the truly novel excuse that

Duncan’s all-encompassing approach to politics meant that virtually all of the expenses cited by OCE had a “campaign nexus.”

“They are not traveling to political events, throwing parties or purchasing club memberships to enrich themselves or live a more lavish life,” David P. Goch and Heidi K. Abegg wrote of Duncan and his family.

You see, he just works so hard for the people of Tennessee that every breath he takes is, in its exhalations of necrotic tissue and sadness, a campaign activity. Rep. Duncan ingests campaign money and poops inspiring campaign rhetoric, man. He loves America so much we wouldn't be surprised if he ends up cheating on his wife like Newt Gingrich did.

So what campaign activities did Grifty Duncan II splurge on, for the good of the Republic? According to the OCE investigation, his campaigning included roughly $25,000 on recreational travel for campaign-related relatives and campaign-related friends since 2008, including

a luxury three-night stay for multiple families at the Greenbrier Resort in West Virginia in 2014 and lodging, mileage and food expenses in the Washington, D.C., area during the 2017 presidential inauguration.

There were also oodles of campaign-related trips for his campaign-related family to New York -- apparently the Big Apple is a hotbed of Tennessee congressional campaign activity -- and a trip for one of his sons and the son's friends to Montana in 2010, although that one makes all kinds of sense, since the lad had some kind of role in running Duncan's campaigns. On the high plains, no doubt, or perhaps skiing.

Credit card statements reviewed by OCE showed another $13,715.83 in gift expenses at retailers such as Babies “R” Us and Williams Sonoma that appeared “in connection with special occasions, like weddings and baby showers.”

We bet the happy brides just loved those "Duncan for Tennessee" gravy boats. And if politicians can kiss babies, certainly they can spend big bucks on showering their mothers, right?

Duncan and his wife both insisted, apparently while keeping a straight face, that the bridal and baby showers were absolutely campaign expenses, because of their all-encompassing approach to politics, you see:

The events at Club LeConte were organized “for various women who had supported us in campaigns, which I always thought was a good thing to do,” Duncan told OCE in an interview. The events also helped “get votes from women,” he said.

Lynn Duncan said she typically bought gifts for “people that’ve helped in political campaigns over the years. . . . If it’s somebody that’s been very active for us, then I say ‘yes.’”

Same goes for tickets to sporting events, concerts, and for all we know, dirigible races, comfort goats, and jowl-enhancement surgery. All-encompassing politics encompasses all, does it not?

So hurrah, Tennessee Congress guy we don't recall hearing of before this! You are a campaigning hero. And also, seeing your name reminded us that we somehow managed not to do a stand-alone piece about Duncan Hunter's $138,666 (devil number!!!) bar tab a couple weeks back, so let's just take a moment to delve into THAT thing of wonder and delight, as literally mapped out by the San Diego Union-Tribune:

A review of records that Hunter’s campaign filed with the Federal Election Commission between March 2008 and November 2017 shows at least 301 transactions totaling $138,666 at bars, cigar lounges, liquor stores, bar-dominant restaurants and similar businesses. Of those transactions, 247 charges totaling $123,786 were made at establishments in Washington, D.C.

The report carefully notes that of those bar tabs in Washington, about 30 percent were for amounts under $100, which the paper says makes them "unlikely to be a largescale political event like a fundraiser." Oh, Dunky Dunky Drunk. If you're going to day-drink like that, you need to spend your own money, not campaign cash. No, getting your bunny rabbit sozzled to amuse the other barflies is not a "constituent service," dude. And of those charges, a whole bunch were at a watering hole popular with lobbyists, make of that what you will.

At least Hunter assured Politico, which first turned up the large liquor tab, that he'd never attended a single meeting in Congress while he was stinko.