Grizzled Old Coot Will Be Oklahoma's Next Democratic Senator 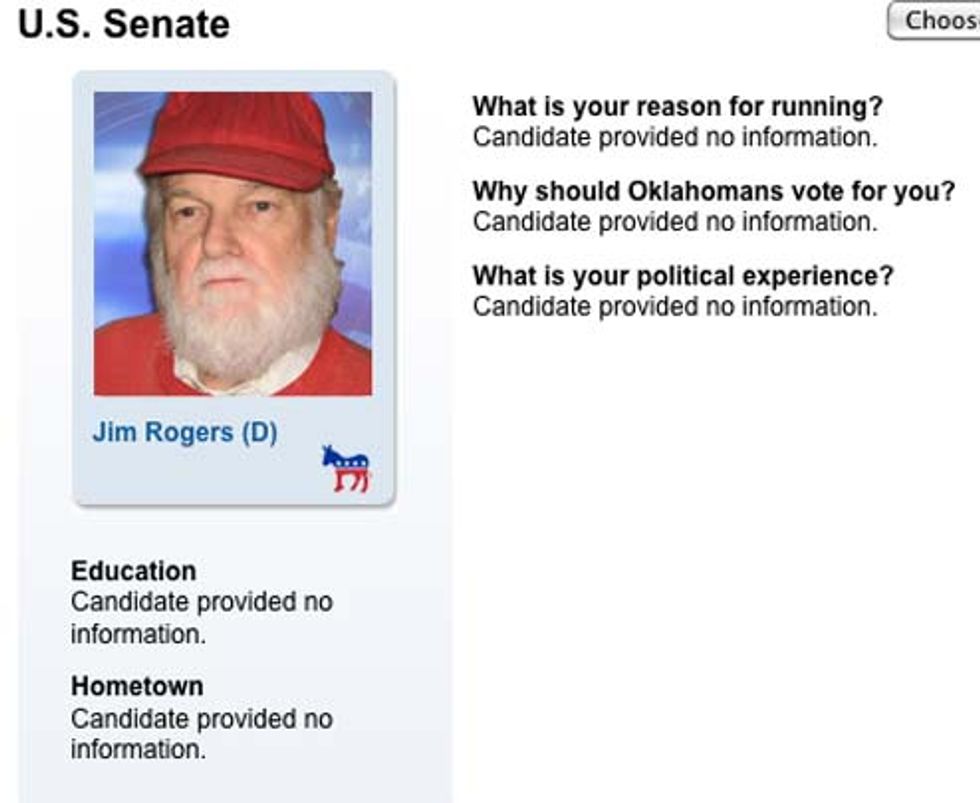 Your Wonkette takes its mandate to keep you abreast of any and all wacky political candidates seriously! So today we introduce you to your new boyfriend, assuming you like old dudes who wear baseball caps and have gross-looking beards. Jim Rogers has run for the Democratic Senate nomination in Oklahoma four times, and we all know that the fourth time is the charm, so now he is your nominee. And come November, Tom Coburn's reign of terror will be over!

What was it that finally put Rogers over the top? Was it his principled, thoughtful stands on issues that are important to Oklahoma voters, as reported by Oklahoma City's News 9?

Was it his tireless campaigning across the state and networking with party leaders that allowed him to beat attorney Mark Myles?

In past campaigns, Rogers hasn't attended forums or debates. Party leaders say their conversations with Rogers have been few and they don't know how to reach him.

"I kept telling people I was running against a ghost," Myles said. "I knew Mr. Rogers wasn't campaigning, but I had to overcome his name recognition."

"I put about 8,000 miles on my car and just ran out of time before I could get to all the places I wanted to get to. I was very well received by the audiences I talked to," Myles said.

"Names matter," said Ben Odom, an attorney and longtime political consultant. "If you're going to run for office in Oklahoma, you can't have a better name than Rogers."

Some may have assumed Rogers was related to Oklahoma's own Will Rogers, the 1930s performer and political pundit, he said.

Jim Rogers is not in fact related to Will Rogers, although he is like Will Rogers in that he doesn't have a website. But who needs a website when you have an enormous sign that you can hold up in the direction of oncoming traffic -- a sign that, as near as we can tell, declares that "US MILITARY PD TINKER AFB USPS VETERANS FDX UPS TAX PAYERS OHP TRUCKERS OPE [...] CHURCH?"

Unlike Will Rogers, Jim Rogers has a Facebook account. Make him your friend, if you dare! Then report back to your Wonkette what happens on his page, as we are too afraid to try it. [News9/The Oklahoman/Jim Rogers Facebook]