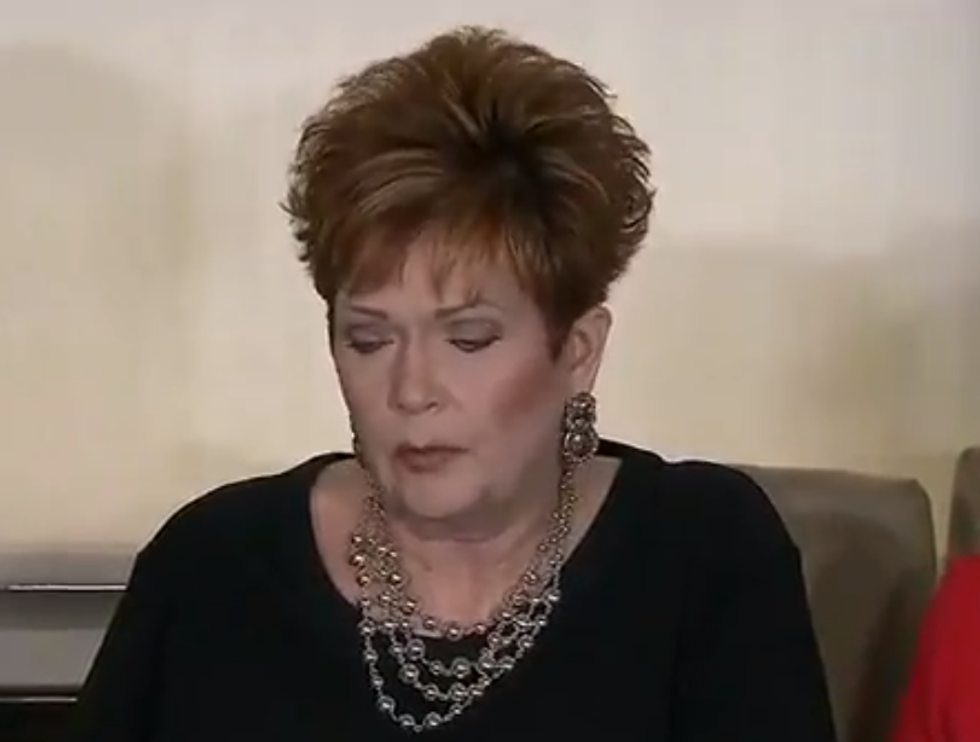 Roy Moore seemed to suggest Friday to Sean Hannity that more accusers would come forward, you know, because Satan is obviously inveighing upon Alabama women to make up lies to stop God's Christian Soldier Roy Moore from taking his rightful place in the United States Senate. The allegations from Beverly Young Nelson, which she read on the record in a press conference that finished minutes ago, are far more graphic than what Leigh Corfman says Moore did to her when she was 14 and he was 32, as if Corfman's allegations weren't bad enough. In Nelson's case, what Moore allegedly did to her sounds like the textbook definition of attempted rape of a minor.

Here's an excerpt from her statement about how she met Moore working after school at a restaurant at age 15:

Oh how nice, he signed her yearbook!

What a totally normal thing to write in a young girl's high school yearbook, when you are an adult male aged 30 (by our calculations).

Intrepid reporters on Twitter have already started comparing the signature to other publicly available examples of Moore's signature and lookie, it appears to be the same:

It gets way, way worse. According to Young, this happened a few weeks after he signed the yearbook, on a night her shift was over and her boyfriend was late picking her up. Here is the full presser, and below, more transcript:

Mr. Moore was wearing brown hush puppies on his feet. He drove a two-door car. ... I got into his car, in the passenger seat, and he began driving. I thought he would get on the highway, but instead he drove to the back of the restaurant. I was not immediately alarmed, as there was an exit from the back of the restaurant to the street, and he could drive there to my house without getting on the highway.

However, instead of driving to the street, he stopped the car. He stopped the car and he parked his car in between the dumpster and the back of the restaurant where there were no lights. The area was dark and it was deserted. I was alarmed, and I immediately asked him what he was doing. Instead of answering my question, Mr. Moore reached over and began groping me and putting his hands on my breasts. I tried to open my car door to leave, but he reached over and he locked it so I could not get out.

Wait, did we miss the part where Moore called her mom to ask if he could molest her kid? Because he told Sean Hannity he always asked the moms' permission before "dating" their daughters. Oh well, guess he forgot just this one time, allegedly.

I tried fighting him off while yelling at him to stop, but instead of stopping, he began squeezing my neck, attempting to force my head onto his crotch. I continued to struggle. I was determined that i was not going to allow him to force me to have sex with him. I was terrified. He was also trying to pull my shirt off. I thought that he was going to rape me. I was twisting and I was struggling and I was begging him to stop. I had tears running down my face.

At some point he gave up. And he then looked at me and he told me, he said, "You're just a child," and he said, "I am the district attorney of Etowah County, and if you tell anyone about this, no one will ever believe you." He finally allowed me to open the door and I either fell out or he pushed me out. I was on the ground as he pulled out of the parking area behind the restaurant.

And Young says Moore left her there in the cold. The next day, she was covered in bruises. She said she didn't tell anyone in the following days, because she was worried "Mr. Moore would do something to me or my family."

As Nelson explained, she told her sister what happened a couple years later, told her husband before they got married, and told her mother many years later.

Oh by the way, Beverly Young Nelson is a member of Code Pink and gives all her extra dollars to George Soros, JUST KIDDING SHE AND HER HUSBAND ARE TRUMP SUPPORTERS, so go ahead and fuck right off with saying this is about politics.

Nelson wants to testify before the Senate Judiciary Committee under oath about what happened, and attorney Gloria Allred stated in the press conference that Nelson isn't looking for a civil lawsuit or a criminal investigation, so go ahead and fuck right off with saying women are doing this for money.

In other news, more than 50 Alabama pastors have signed a letter in support of Roy Moore. You know, because they know WWJD, and it is "support people who allegedly bad-touch kids."

And what's happening over in the Moore camp?

So, Roy Moore mysteriously develops bone spurs in his dick and drops out by the end of the week, right?