Guess Who Is A Big Wage Stealing Robber Jerk? It Is Right-Wing Capitalist Hero Papa John! 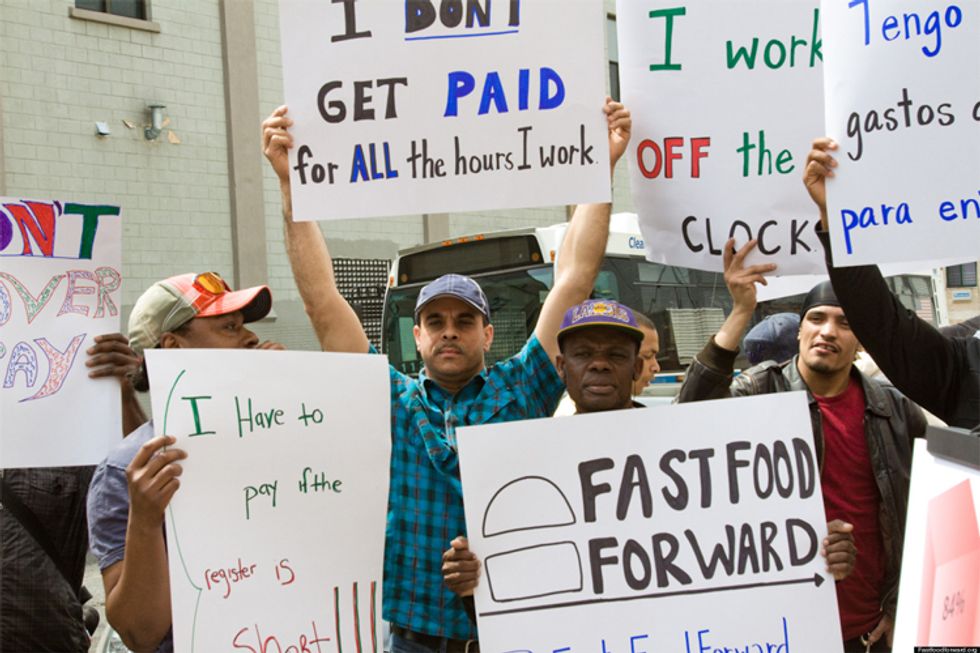 Here's some Nice Time/Justice Done news for all you fans of class warfare: A Papa John's pizza franchise in New York has been ordered to pay almost $800,000 in back pay to workers it cheated out of wages. The court found that for more than six years, the franchisee "Emstar Pizza Inc," which operates seven restaurants, rounded each employee's hours down to the nearest full hour, cheating hundreds of employees out of their full pay, as well as underreporting hours worked and not paying overtime. Let's hear it for the job creators, who deserve a tax cut for all the hard work they put into earning profits, huh? You don't just come up with scams like that by being lazy. The owner of the franchise, Emmanuel Onuaguluchi tried unsuccessfully to escape previous court orders on back pay by attempting to sell the franchise.

The suit was brought by New York Attorney General Eric Schniederman, who said in a statement:

This judgment sends a clear message that like every other business in New York, fast food employers must follow the law ... This Papa John’s franchisee brazenly violated the law, shaving employees’ hours and avoiding paying overtime by various means, including giving managerial sounding titles such as "head driver.”

Schneiderman is considering expanding the suit to seek compensation from the parent company, Papa John's, Inc., as a joint employer of the cheated workers. Previous judgments against franchises immunized the parent company by treating the franchise as an independent operator, but in June, the National Labor Relations Board ruled in a separate case that McDonald's could be sued as a joint employer that was liable for the actions of its franchises, not just its company-owned restaurants. If Schneiderman is able to pursue a similar strategy against Papa John's, workers could have a better chance of getting a fair deal when suing giant corporations in the future. Of course, then Papa John's might have to charge another extra dime per pizza to pay for it, which it already had to do thanks to the burdensome cost of Obamacare.

You know what that means, kids. Get ready for Fox News to start crying about the War on Ronald McDonald by greedy minimum-wage workers who are trying to End Fast Food As We Know It.