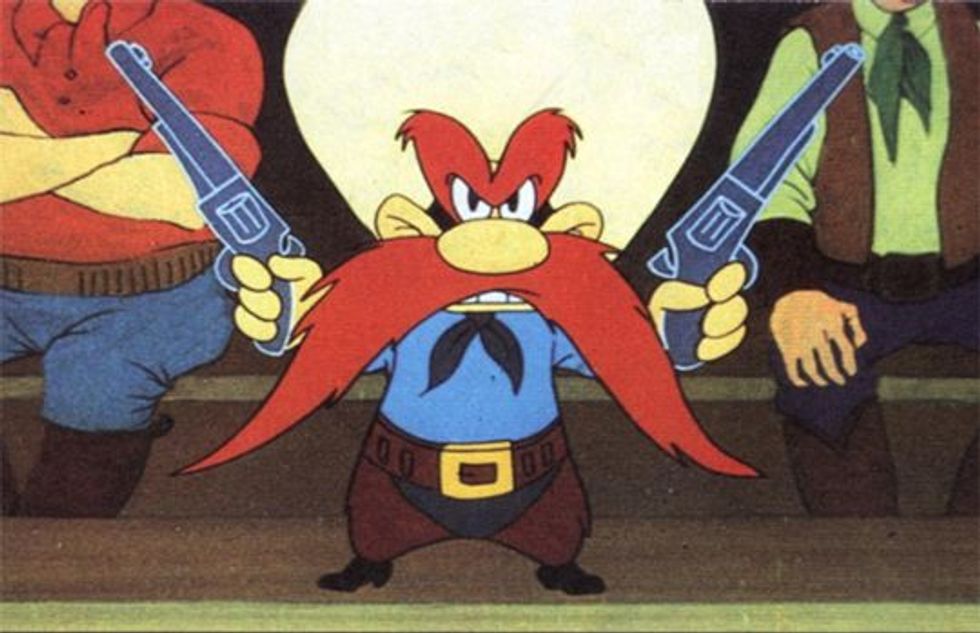 Guns. Hot damn, if we all don’t want bigger, badder, better guns! Pew! Pew! Pew! America, Fuck Yeah, Second Amendment, NRA, freedoms, and all that jazz! Am I right! And if we occasionally need to feed the Tree Of Liberty with the blood of dozens of schoolchildren, then so be it, because GUNS ARE TEH BEST. We don’t care if they are big guns or small guns, so long as they are dick-shaped and can help us overcome masculine insecurities, we’ll take whatever you are offering. Can I get an ‘amen’ from the gun enthusiasts? RawStory has the amen:

Belinda Padilla, president and CEO of the U.S. division of firearm manufacturer Armatix, says she was stalked and threatened by “gun enthusiasts” after she tried to bring a safer handgun to market.

Oh right. We love guns, except for better, safer guns. Because even the option of a safer gun somewhere is an affront to freedom everywhere, just like that Martin Luther King Jr. guy said, “Injustice anywhere is a threat to justice everywhere,” except with guns and safety being a threat to freedom. Un-ironic self-five for MLK reference!

When we first brought you this story, it was a barely passing mention in a longer diatribe about how the NRA sucks donkey balls. But we felt that gun enthusiasts threatening a person for bringing another gun to market deserved the full Wonket treatment.

So this lady and her company helped develop a handgun that can only be fired by the owner. The owner would be forced to wear, “a watch that ties the owner to the weapon, called the iP1.” Sure, they say it is a watch, but are we sure it isn’t A YELLOW STAR TO HOLOCAUST GUN OWNERS, HENNGH? Maybe the watch makes it easier for drones to kill all the gun owners when Barack Obama tries to force us all into FEMA death camps during his Third Reich Term?

Or maybe this is a problem because some people have multiple toddlers who are often forced to fend off other children, be they siblings or neighbors, and this device would restrict their rights to stand their ground. Who will think of the children? Unless they make child-sized companion watches, in which case that's cool too.

It makes total sense that “a forum of online ‘gun enthusiasts’ published her cellphone number.” Probably just wanted to complete an order by phone, hoping it would be faster, right?

She said it began with a “few fuming-mad voice mail messages and heavy breathers” that got her to stop answering her phone.

Well, she shouldn’t be tethered to her phone, anyway. She probably has kids to take care of, so these folks were doing her a favor, am I right? Women can be so hysterical.

And then photos of her home were posted online.

“In a crude, cartoonish scrawl, this person drew an arrow to the blurred image of a woman passing through the photo frame. ‘Belinda?’ the person wrote. ‘Is that you?’” according to the [New York] Times.

Oh. Well, it’s probably for a good reason. Is she trying to shove a safer handgun down our throats? Are we losing our precious, misinterpreted Second Amendment FreedomsTM to carry any gun at any time to any place with any blood-alcohol level anywhere in America?

“Right now, unfortunately, these organizations that are scaring everybody have the power,” Padilla explained. “All we’re doing is providing extra levels of safety to your individual right to bear arms. And if you don’t want our gun, don’t buy it. It’s not for everyone.”

Can this lady get more Un-American?!? What does she think this is, a capitalistic society where consumers want choices about what they can purchase? Does she think that people want “options”? Take that commie hippie shit back to Germany, lady, because here in the U.S. of A., we like our guns like we like our children’s science curriculums: dumb. We don’t need that namby-pamby “smart” gun shit here, so we will harass you until you get the message.

But she vowed not to give up.

“This is my mission in life,” she insisted. “If they really understood our technology, they wouldn’t be afraid of it at all.”

Understand?!?! Do you know nothing about American gun culture, lady? We are dumbass reactionary fucks, and we will have none of your hifalutin “understandings” at all. If “dumb guns” were good enough for Jesus, they are good enough for us. Can we get an amen?