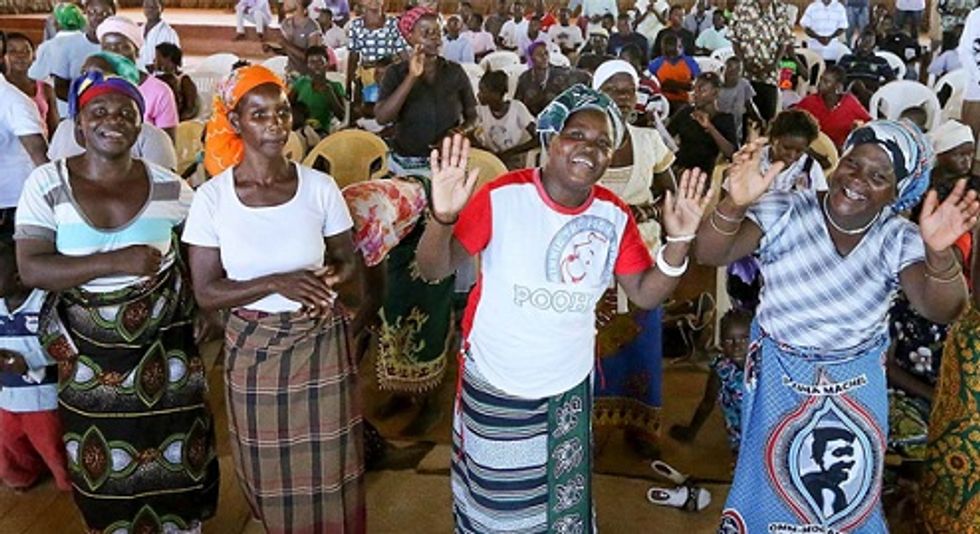 Larry Pratt, the descriptively named executive director of Gun Owners of America, hasfigured out how to improve The Blacks in America: In a recent radio interview, he explained that American blacks would have a much better time of it if they could just be more like "the African from Africa." You know, that one guy.

Pratt, who has previously warned about the private army of blacks that Obama is building to foment race war in the USA, spoke last month with Selwyn Duke on the "Gun Owners News Hour" -- proving again that every rightwinger has a podcast -- and they went over the usual news, like how Obama is converting the U.S. military into "a martial law ready" force by promoting minorities above whites, and then they got to the more arcane stuff about how American blacks could really learn a lot about good attitudes from Africans from the Africa:

“Generally, the African from Africa is a very pro-American person, a very happy person,” Pratt said. “I know several, and they’re always happy with a joke, a pleasant smile on their face, and they clearly don’t identify with the surliness that’s all too frequently the attitude of their fellow African Americans here.”

And Larry Pratt sure could learn a lot from trying to emulate human beings, now couldn't he?

In the first part of the interview, Duke (no relation to David, as far as we know) explained a favorite theme of his, that Obama is getting ready for martial law by "purging white Christians" from the military:

“I’m not saying there’s anything nefarious going on here for sure,” Duke told Pratt. But, he said, if you “wanted to have the military on your side…you would do it by implementing the exact same policies that Barack Obama has been implementing.” Pratt added his pet conspiracy theory that the president is “building up a civilian defense force, not for defending the country but defending the president.”

We like that qualifier at the start -- after all, maybe there's a perfectly benign reason Obama is purging the white Christians from the military. Just raising the question.

And then they got to Duke's "surprising" discovery that the "best" Catholic priests come from Africa, which inspired Pratt to his thoughtful reflections on happy African Africans versus the surly African Americans over here -- not that he is racist, of course, since he is clearly in favor of some blacks, so don't you liberals call him a bigot. Besides, Africans from Africa have the right idea about morality, unlike their debased American counterparts:

Then again, Duke explained, you really can't judge all The Blacks from limited exposure to the African Africans who come to the U.S., because We tend to see Them on their best behavior: “the Africans who come here in the first place, I would say, tend to be of a better stripe."

So very true, agreed Pratt, and maybe that's something we could learn from!

“These are folks who really stand apart, and maybe they can approach some of their fellow blacks and say, ‘Hey, buddy, you’ve got this all wrong, let me explain to you the way the world really works.’”

Then again, maybe these happy, smiling Africans simply haven't gotten the chance to know Larry Pratt, an experience which we imagine might leave pretty much anyone surly. As of press time, Yr Wonkette was unable to determine whether any country anywhere would want Mssrs. Duke and Pratt.

And then they turned their expertise to the late Nelson Mandela and South Africa. You may not be the least bit surprised to learn that they agree that apartheid was no big deal, really:

Pratt lamented that Dutch and English settlers “neglected to evangelize the blacks,” so that now “there aren’t common values, there is certainly no Christian ethos in that country.”

Duke went on to explain that the world's treatment of the “supposedly racist” apartheid government reminded him a whole heck of a lot of a completely similar thing in America:

“South Africa was sort of the George Zimmerman of the geopolitical stage,” he said. “It was a situation where you had black on black crimes that were rampant and brutal that the media ignored, but this white-on-black so-called crime was disseminated far and wide…simply because it accorded with the politically correct agenda.”

Yeah, we remember how South Africa's black majority was coming at the whites with a can of iced tea, and could have hit them with a sidewalk, so just to defend themselves, the Afrikaners had to institute a decades-long system of segregation and repression that sorted all citizens by race and denied privileges to nonwhites. Then again, it was dark, and confusing, and there were no eyewitnesses, so we may never know what really happened.