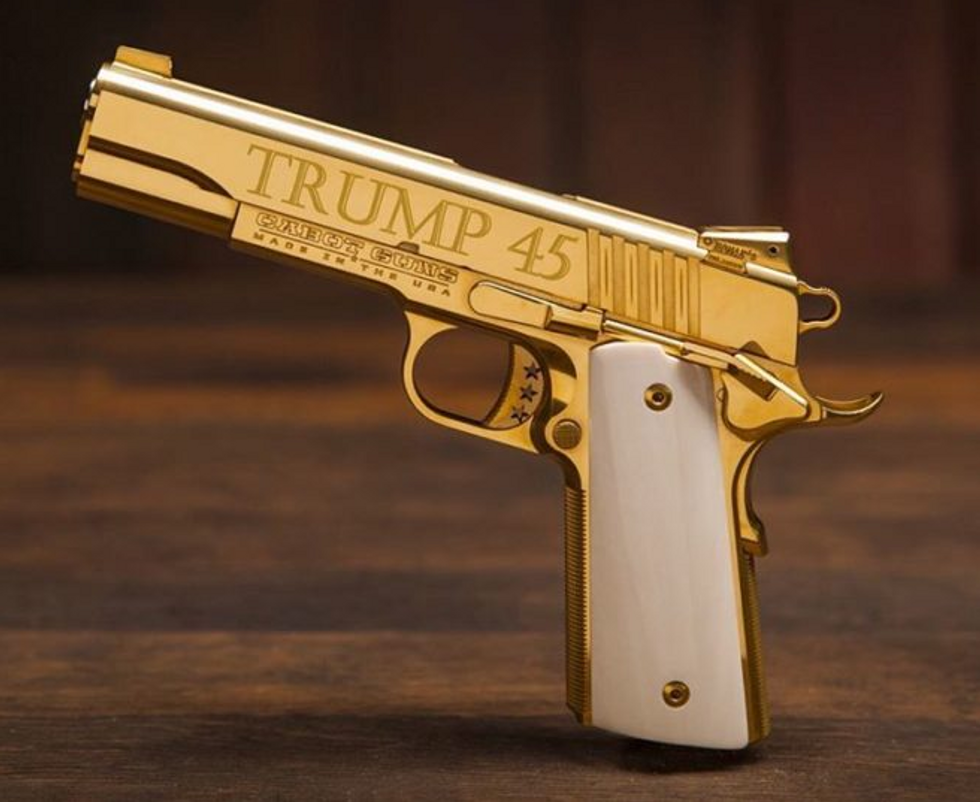 This is an actual thing you can buy from Cabot.

I like hunting and blowing up cans in the woods, and I live in a place where once a year or so you have to put down a deer or feral kitty just out of compassion. It doesn't then follow that I want people to die because of shitty laws. Most gun owners think the NRA are a bunch of insane whiny fuckbags and the vast, VAST majority of us support things like universal background check databases.

Guns are like money in that most people who have any at all will have one or two, while collectors and gun nuts stockpile dozens or hundreds, driving up the ownership rate overall. Most owners think those people are fucking crazy. I thought those things might be nice to remember before I tell you about how Black Friday weekend went with the guns.

Now, this is a problem because that is a LOT of background checks to get done in three days, which is how long the FBI gets to approve a gun purchase -- and if it's not done by then, you get an automatic pass! A background check is supposed to turn up any arrests or convictions that would disqualify one from gun ownership but there's not a good national database for this shit (because Congress won't allow a good national database because TYRANNY), so the FBI is working with something along the lines of 70 different databases for every query. And a good portion of those are incomplete. That's why we keep getting the mass shooters who shouldn't have been allowed to buy the guns they used. We have (some of) the laws; we lack the resources and will to enforce them.

Gun owners are almost twice as politically active on gun things as non-owners. Between that and the NRA astroturfing its blackened and shriveled heart out it's nearly no wonder that legislators think they're taking some kind of risk by insisting on reasonable restrictions -- like that universal background check database that even 80 percent of gun owners think is a fantastic idea. Like making a domestic violence conviction an automatic no-go for legal ownership. Like holding parents liable for what their kids do if they don't properly secure their weapons.

There's a lot of things we could be doing that have broad support both amongst owners and non-owners. We don't, partially because we are having conversations about imaginary things instead of reality. Both the NRA and people who really hate the NRA have an interest in selling the image of gun owners as wannabe Rambos who are so nationalistic they can't see past the ends of their barrels, which neatly precludes anything like political organization between owners like me and activists who very reasonably would like there to be fewer gun deaths in America. What I'm saying is that we are no more rational on the issue of guns than we are anything else in this year of our Lord 2017.

So we hit record applications for purchases and I'm wondering whether it's because the shootings are getting so bad that everyone thinks we might pass a ban again. Back in the UNIMAGINABLY LONG AGO of the 1990s we banned semi-automatic weapons for 10 years. It grandfathered in anything that had been bought before the ban went into effect. It didn't actually stop anyone from getting high-capacity clips or even fully automatic weapons; my first husband (bit of a gun nut) bought an AR-15 and then found a pre-ban mod kit to take it from three round burst to full auto. Perfectly legal. But he had to work for it. It took him probably six months to get everything together, and those pre-ban full-auto mod kits were a diminishing resource after the ban because while you could buy what was already on the market we weren't selling any new ones.

I don't recall the ban impinging at all on my freedom to shoot at targets or animals. In five years we bought 10 guns. (He REALLY liked guns.) Most of the freedoms that I remember being repressed during the ban came out of the PATRIOT act. None of them had to do with weapons.

So there's a couple hundred thousand or so new applications, and we don't know how many of them will have to be rushed through by exhausted and overworked agents, and hot damn would it be nice to see us all having a rational discussion about what the fuck we do about this.

I'm a gun owner, and I have to tell you that I'm getting really tired of us doing nothing about the guns.

Wonkette is ad-free and relies on YOU to pay the lady to talk about her guns. STICK EM UP.