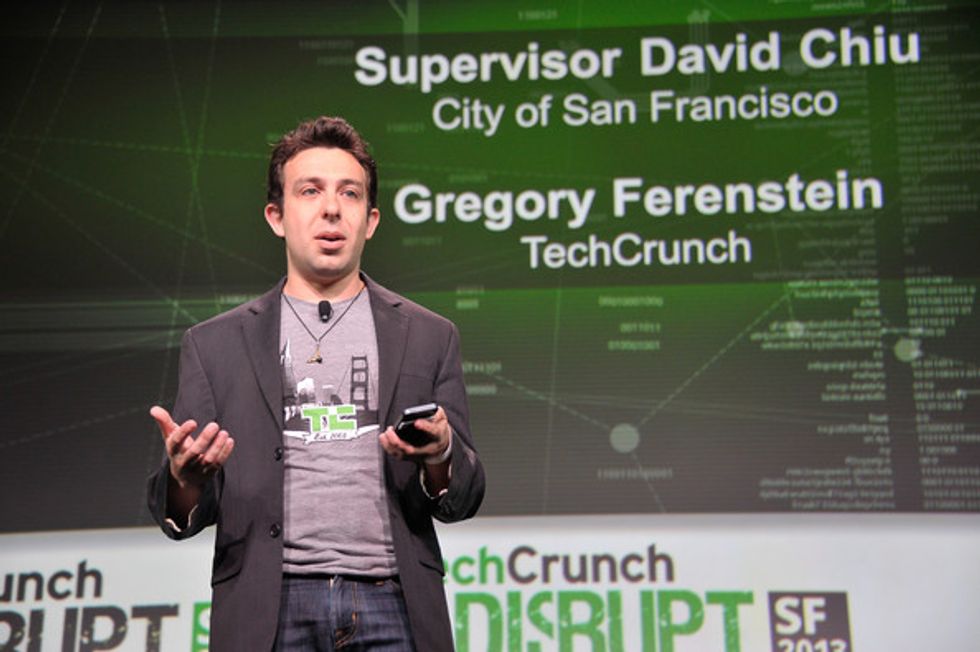 Were you to Google "Gregory Ferenstein," the first article you would see with his byline would be the one I am about to tell you about, titled "I Voted for Hillary. And Now I’m Going to Write for Breitbart." I am telling you this first, so that you will not look at his name and go "Oh! Do I know that name? Is he someone I have read before and respected? Is he a commie like me?" Because the answer to that is no, almost definitely not.

But yes, Gregory Ferenstein, someone you probably don't care all that much about, is a "Hillary voter" who is now going to write for Breitbart. And he has REASONS!

The gist of what he's trying to say, for the most part, is that he's writing for Breitbart, because he wants a platform to "persuade" Trump voters, and does not feel he can reach them otherwise, since they don't like other kinds of media. The role of the media as gatekeepers to marginalize "abnormal" candidates is over, he says, and these people must now be persuaded.

On the surface, this does appear to be a noble goal. I do think it's important, especially for white people, to attempt to interact with these people and "collect our cousins," as they say. Freezing them out -- as satisfying as that may be -- is not effective, but I do think conversation can be. After the election, I conducted an informal survey of my Facebook friends, asking those who had not always been progressive, about what it was that changed their minds. The main things seemed to be simply interacting with other progressives and discovering that they weren't the "scary" people their parents made them out to be, going to college, moving to a city -- all of which has led me to the conclusion that the best way to reach people is through exposure and conversation. And, at the end of the day, I care most about what is effective than what is satisfying for me, personally.

All of this aside, Breitbart is a totally different animal. Breitbart does not consist of people who are lacking in information, or people like these West Virginia Trump voters who are just desperately hoping that someone can come and save them from poverty, and have been tricked into thinking that Donald Trump is that person. They're not people who sincerely believe that Trump is going to create good jobs for them and their families. Breitbart is, rather, a troll site. It is a site for trolls. Disingenuous trolls whose main gripe with the world is that people think they are assholes when they act like assholes. Or, rather, that anyone who isn't a white man has enough social power to make them look like assholes. No one is hanging around there being fabulously sincere.

But Ferenstein sees them as a tad more gentle than I do.

But writing for Breitbart has taught me that there are complexities to conservative populism that I didn’t fully understand.

For starters, what I learned from the commenters is that Breitbart’s audience isn’t stereotypically racist, as in believing one ethnicity is better than another. Rather, the general sentiment is one of fear and distrust. They’re angry at a political establishment that is trying to tell them how to live and appears not to care about the erosion of their culture.

What erosion of their culture is this, specifically? Is there a particular kind of traditional folk music they are concerned about preserving? Sacred lands? Because I feel like it is not. In fact, I feel reasonably sure that the "culture" they are concerned about is far less "Boy the way Glenn Miller played" than it is "Guys like us we had it made." Because these people are welcome to have any culture they want -- they just don't get to be the dominant culture. They have to share a space with other people, and they don't like that. They're not fighting against cultural erosion, they're fighting for cultural dominance.

I would love to know, specifically, what "culture" they think are seeking to preserve. Because America has been a "melting pot" (though I'd prefer to think of it as a stew) for centuries. We've had waves and waves of immigrants all contributing to our culture since forever, we don't have one specific American culture. And I think that's great! Hell, where would you all be if my people hadn't come over here and brought all our delicious food with us? Food that is now considered just as "American" as anything else.

I live in San Francisco. I am surrounded by cosmopolitan people who embrace rapid disruption. But Breitbart's audience keeps me connected to the rest of the country and teaches me that I should pay much more attention to policies that can protect American culture while promoting global expansion.

If you think Breitbart's audience is a good representation of the rest of the country -- even the rest of Trump voters? You have clearly spent too much time in San Francisco. No, the entire rest of the country is not a seething pile of hatred going around copying the 14 words, and reacting to Harper Lee's death by screaming that she was an SJW who cruelly tried to make it look as though black people weren't evil.

That cannot possibly be all of middle America. It can't be. And even if it is, those are not the people who can be reached anytime soon.

Of course -- Ferenstein does not want to persuade them to not be racist assholes. In fact, his very first article for the site is all about how an informal survey he conducted suggests that Trump voters are not so much racist as they are nationalistic, because they also think that Americans moving to Mexico would erode Mexican culture. And lord knows it is totally not possible to be nationalistic and racist at once.

No, he doesn't want to ameliorate that situation. He wants to get them to understand that globalization is grrrrrrrrreat!

At the same time, I’m hoping that my writing on Breitbart can help persuade some of its readers that globalization isn’t all bad. After all, certain aspects of globalization, such as an economy that is resilient to automation and cheaper goods, help struggling Americans.

First of all? These people are not so much mad at globalization, they are concerned about "globalism" -- it's a different thing. They don't like things like the UN, they don't like anything other than "America is the greatest country on earth and everyone else can suck it!" They are not concerned with the resettlement policies of the World Bank and or the sketchy way the IMF loans money to struggling countries and then forces them, through structural adjustment policies, to cut anything that helps people in order to ensure debt repayment, or the way either of them supports dictatorships, they are not concerned about sweatshops or child slavery, or fair trade. These are not their concerns.

I'm not sure I like the idea of someone going "Oh, I'm a Hillary voter, I'm gonna try to reach people on the other side" and then going and trying to convince them to love globalization, like that's something anyone was asking him to do or hoping would happen. Least of all me!

Yes, that is me, in 2002 I think, on the cover of the Washington Times, just after getting my tits bashed in with a billy club at an anti-IMF protest. And yes, I burned those jeans as soon as I got home.

I'm not too certain he's on our side on other issues as well, given that he also recently tweeted some anti-#FightFor15 stuff.

So apparently he thinks he's a liberal -- or, rather, a "Hillary Voter" -- but his main causes are pro-globalization and opposing minimum wage hikes. Huh? That seems more like a moderate Republican to me.

But I digress! Ferenstein does bring up the "inflammatory" articles that Breitbart publishes, but excuses them on the grounds that they are only publishing them in order to combat "idea suppression."

I've learned that Breitbart's editors, rather than being blindly ideological as critics assume, are quite comfortable with an unencumbered marketplace of ideas. Breitbart will accept a wide range of opinions. Yes, this includes opinions that many find intolerant, among them, "There’s No Hiring Bias Against Women in Tech, They Just Suck at Interviews” and "Bill Kristol: Republican Spoiler, Renegade Jew.” There’s no question that Breitbart errs towards the strident. Strident op-eds are its weapon of choice for fighting against what it fears is a dangerous tendency toward idea suppression.

We have an unencumbered marketplace of ideas, it is called the Internet. There are terrible things being published all over the internet. Anyone can set up a blogspot or a YouTube channel and start talking about how much they hate women, or Jewish people or Black people. There is far less "idea suppression" today than there ever has been in the history of the world. What they are mad at is other people not accepting their ideas. There is no practical reason to give these "ideas" a boost, unless you're trying to appeal to an audience that wants that. Which is what they are doing.

Also what they are doing is creating an insular culture in which someone goes into there being maybe only slightly terrible, but keeps upping their game as time goes on in order to keep up with the rest. Sort of like when people go to jail for a non-violent crime and come out worse than they were when they went in. It's really disturbing.

Did they just describe a "safe space?"

And I do not believe that these people have any noble interest in preserving "free speech" or a diverse marketplace of ideas. As demonstrated by another of Ferenstein's tweets.

You can't demand that people be sent to jail for burning the flag, you can't argue for "opening up the libel laws," you can't demand nationalism and patriotism from people and say that you love the First Amendment. You can't only love the First Amendment in the way that you think it allows you to say racial slurs or quote "The Bell Curve" without anyone telling you you're an asshole. That's not what that is.

I can't see any noble goal in what Ferenstein is trying to accomplish here. He's not helping anything, or any liberal cause as far as I can see. He's not challenging their racist or anti-Semitic beliefs, he's coddling them and telling them they're just "nationalists" -- which they were doing just fine on their own. He's not challenging their idea that their "culture" is being eroded, or informing them that it is not anyone else's job to engage in that culture but theirs. He's not challenging them to be more empathetic, or to have a better grasp of the First Amendment. His whole plan, from what I can see so far, is to convince them that globalization is great, which exactly no one was asking him to do. Hell, that was maybe one of the areas where we could have actually started to find common ground and build on it, even if we oppose it for different reasons.

But hey, you do you, Ferenstein! Just don't act like you're doing us any big favors.