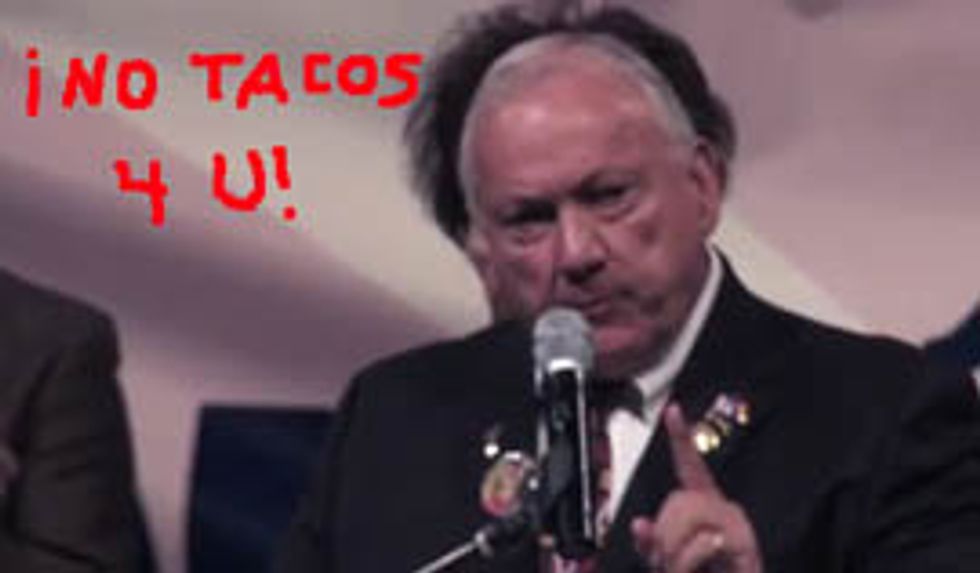 Top Arizona horse's ass Russell Pearce, the former state Senator known for his awkward testicle jokes and his authorship of the state's anti-immigration law that codified higher levels of skin pigmentation as a form of suspicious behavior, was rejected by two Mexican restaurants in Phoenix upon trying to hold a fundraiser at each to help get himself back into office. That is correct: He wanted to stage an event, to collect money for himself, in a Mexican dining establishment. And yet it turned out not to be the most foolproof way of gloating.

Pearce was thwarted by, yes, the Tequila Party, the humorous Arizona Latino voter response to the constipated sourpuss Tea Party. Tequila Party co-president DeeDee Garcia Blase got wind of Pearce's fundraiser and planned a protest of the first Mexican restaurant where Pearce had planned his event. The restaurant quickly cancelled the booking. So he tried again at another Mexican restaurant.

From the Arizona Capitol Times:

Late this morning, Pearce’s campaign sent an email to supporters informing them that the fundraiser would instead be held at Oaxaca Restaurante y Cantina in downtown Phoenix. The email did not say why the location was changed.

Within hours, Oaxaca also cancelled Pearce’s event. Joseph Aguayo, the restaurant’s manager, told Arizona Capitol Times he did so after Garcia Blase contacted him and told him the event, which was registered under a different name, was actually to help Pearce raise money in his bid to return to the Senate after being recalled last year.

“We don’t need that,” Aguayo said. “We want to keep the support of our Latino community.”