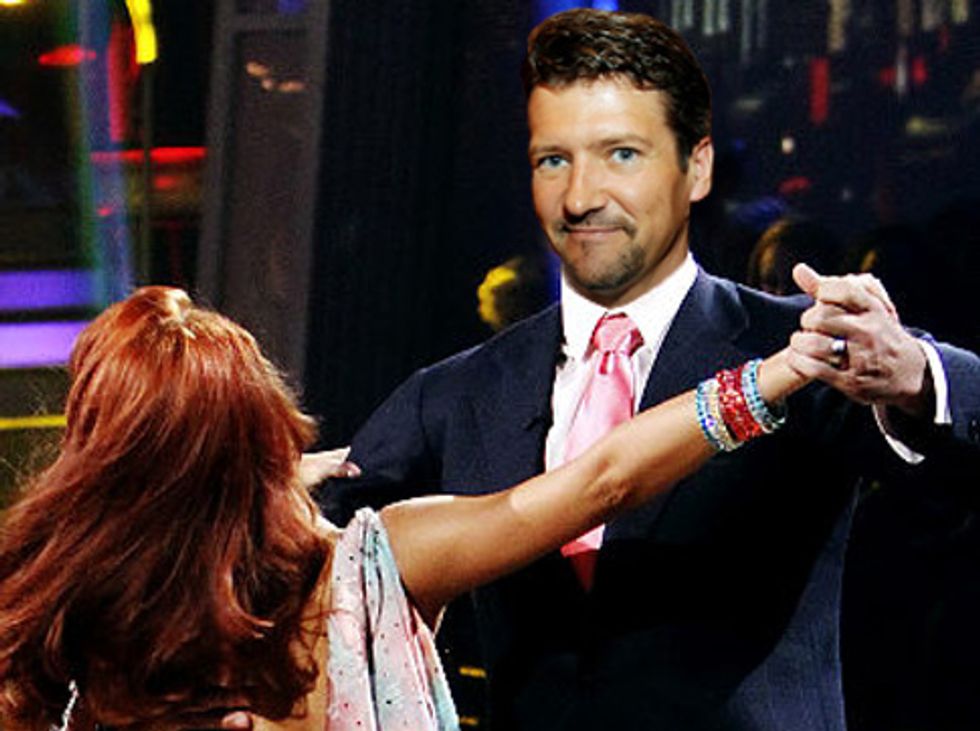 So! Got any exciting TV-watching plans now that "Mad Men" is back on its usual two-year hiatus? Oh, you are going to watch "Stars Earn Stripes," because that is a thing, and it is going to be hosted by terrifying unblinking robot General Wesley Clark along with "'Entertainment Tonight' and 'Dancing with the Stars' alum Samantha Harris"? Good, good. Sounds reasonable. And it'll be "reality" "stars" teaming up with tough (and presumably hot) military men and ladies to do, like, missions? Hmmm. Who's gonna be on it? "[B]oxing royalty Laila Ali, actor Dean Cain, former NFL player Terry Crews, singer Nick Lachey Olympic gold medalist Picabo Street, NBC’s 'The Biggest Loser' trainer Dolvett Quince, and WWE star Eve Torres." We don't know what any of those words mean. Not sure we're thrilled with this television choice so far, America. Is there anything that could make us watch this?

Now, we remember back to the heady days of the 2008 Republican convention, when all of a sudden the announcement of snowbilly grifter Sarah Palin as John McCain's special naughty princess caught all of America by surprise -- all of America except readers of Your Wonket, of course, who were the only people who had ever heard of her, because of how she was a GILF.

And we remember people like Andrew Sullivan (maybe we are just confusing Sullivan with Greta Van Susteren?) thinking Todd Palin was a pretty studly "first dude" with his Oakley wrap-around sunglasses and his phlegmatic monosyllabicity. (That is, he stood around doing an impression of a tree stump like a dumb fucking cunt.)

Yeah, we didn't get it either. And now we can continue to not get it, together, when this scintillating bit of red-blooded American Television Programming (from Mark Burnett!) debuts in August with the half-term first dude (half-dude?) attached. Presumably Bristol Palin's reality television program, "Life's A Tripp," will have been canceled by Lifetime by then and Willow's "Sixteen And Pregnant" will have taken its place, or maybe we'll get the oldest one, Trepann, on "Celebrity Rehab."