Halperin: Everyone Not Named 'Sean Hannity' Is WRONG About Palin 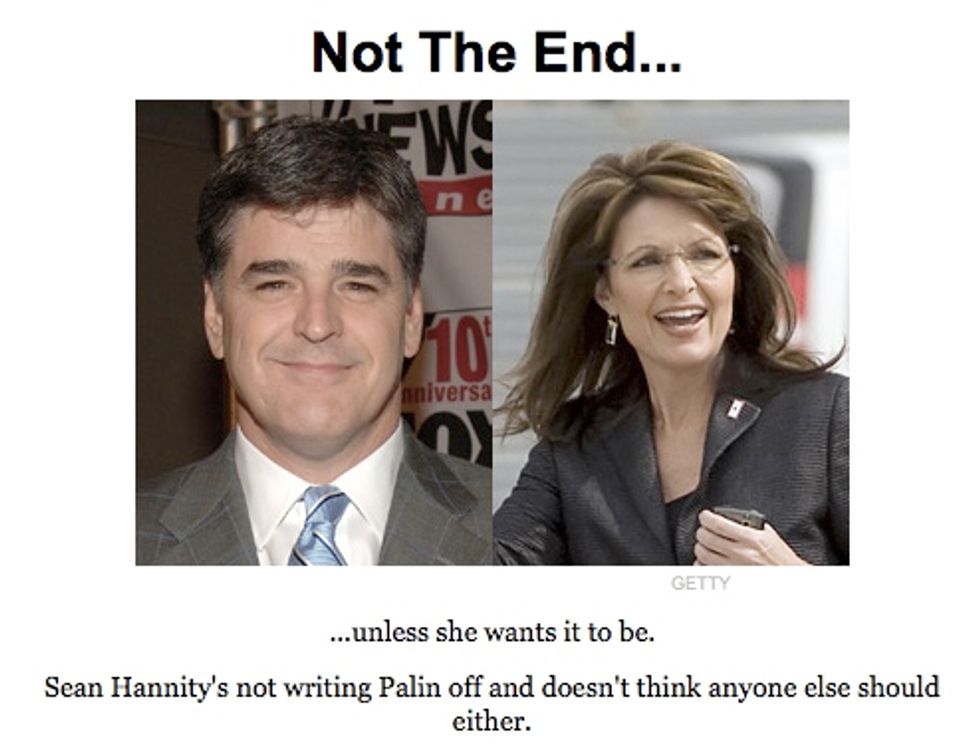 TIME magazine's chief political sociopath Mark Halperin, who is right about most things, in politics, is urging readers of his The Page website to memorize Sean Hannity's interpretation of Sarah Palin's steamy resignation, oh boy. Sean Hannity says not to trust the media! Since such parameters would ostensibly include Mark Halperin, we agree with Sean Hannity. But what non-Hannity conclusions does Halperin include in the latest not-annoying edition of "HALPERIN'S TAKE," not-annoyingly titled "9 Pieces of 'Analysis' About Sarah Palin's Decision That Are Flat-Out Totally Wrong"?

2. She would have been a stronger candidate for 2012 if she had stayed in office.

3. Republican primary and caucus voters in 2012 will care if she served out her term or not.

5. Making the announcement on the Friday of a holiday weekend was really stupid.

7. Palin made the decision not to run for re-election all of the sudden.

8. Palin's rhetoric about the politics of personal destruction was not heartfelt.

Okay, so #8 is the obvious "Boner Moment" we were looking for when we read this list.

Most interesting, though, is #2: "She would have been a stronger candidate for 2012 if she had stayed in office." There is NO TRUTH in this "analysis" at all, and no truth can be weaned from it. This is what Mark Halperin is telling us: it would be "flat-out totally wrong" to even entertain the notion that this lady quitting her elected job halfway in, because it was too difficult, could be detrimental to her run for the United States Presidency in 2012. People who think this should expect Mark Halperin to punch them in the face, for being so stupid.

HALPERIN'S TAKE: 9 Pieces of "Analysis" About Sarah Palin's Decision That Are Flat-Out Totally Wrong [The Page]