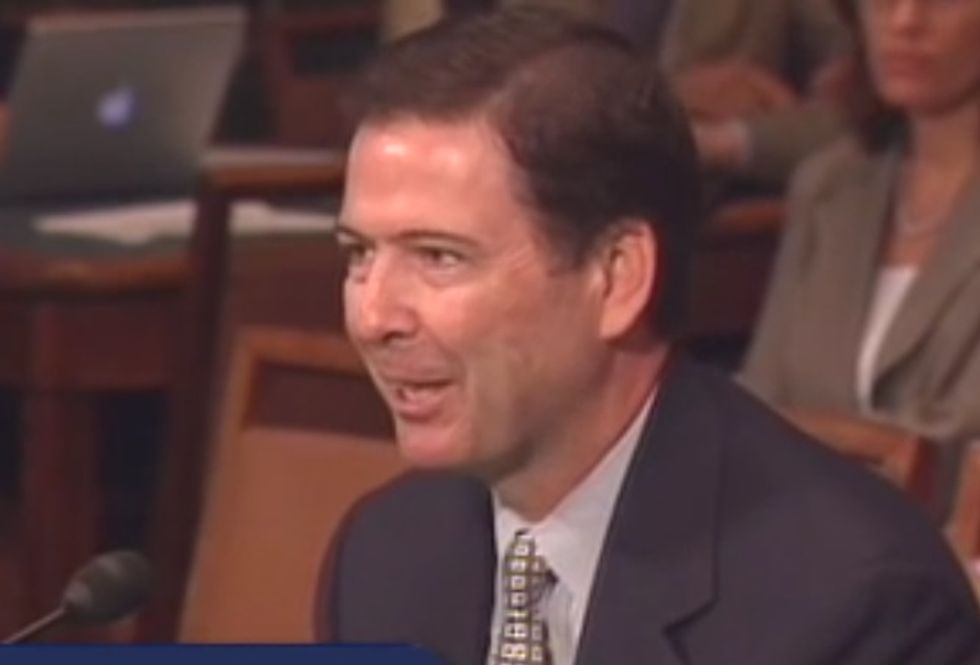 TELL US THE STORIES

Good morning Wonkers! Are you ready for fired FBI director James Comey's testimony before the Senate Intelligence Committee, which is the only Christmas we may get this year, considering how Donald Trump is still president of America and we wouldn't put canceling Christmas past him, because of how he's a dick? Good! Brian Williams is bothering us on the MSNBC for whatever reason with his "special coverage," yr Wonkette has purchased all the supplies (liquor and gourmet deli breakfast items) necessary to liveblog this at you for as long as it takes, and James Comey just got picked up at his house in McLean, Virginia, so he can come to the Senate and do BOMBSHELLS. Or maybe he won't do bombshells. Who knows?

We saw Comey's opening statement Wednesday afternoon, and it tells us the basic plot points of how Trump tried to move on him inappropriately, in a justice-obstructing way, though he didn't use those EXACT words. If you haven't read it yet, CATCH UP, BOZO.

The RNC has released talking points to rebut Comey's testimony, because obviously this is a political campaign event for the president, and also the president is a liar, so we can't just let a career public servant testify about his interactions with the president without having TALKING POINTS against it.

On that same note, here is the very dumb and hilarious anti-Comey ad that will be running today during the hearing. It was released by the "Great America Alliance," some Trump-fellating super PAC full of IQ-deficient loons, because at least for today, it's CAMPAIGN SEASON, and James Comey is playing the role of "Hillary Clinton Democrat Devil," which is kind of funny considering Comey's history, isn't it?

As for the president's own personal feelings about Comey's testimony, we can only assume that he has shit one thousand spray-tanned bricks this morning. Will he tweet? WE SURE HOPE SO! Kellyanne Conway, Lady Mike Huckabee, Sean Spicer -- whoever stoled the president's phone and threw it in the Reflecting Pool out by Lincoln Memorial, FISH IT OUT.

And here's what Michael Cohen, that other creepy Trump lawyer, has to say about it:

Haha, what a fucking loser. When exactly was the entire dossier debunked by Christopher Steele? Oh that's right, it wasn't, and much of it has actually been confirmed. SAYS WHO?

OK here is your livestream video, for watching James Comey:

And now we liveblog!

So much SERIOUS FACE.

Right now committee vice chair Democratic Senator Mark Warner is listing everybody in Trump World who has ALREADY had to resign/get fired over ties to Russia.

Comey will not be reading his opening testimony, since everybody already knows it. Do you not know it? It is RIGHT HERE.

10:21: Here is part of the opening testimony! Comey is NOT happy with the way Trump has "defamed" the FBI, and he's pretty confused following the bouncing ball of reasons Trump has given for firing him.

Oh damn, #Comey is signaling that this day will end Trump. pic.twitter.com/HbeIRpxmdg