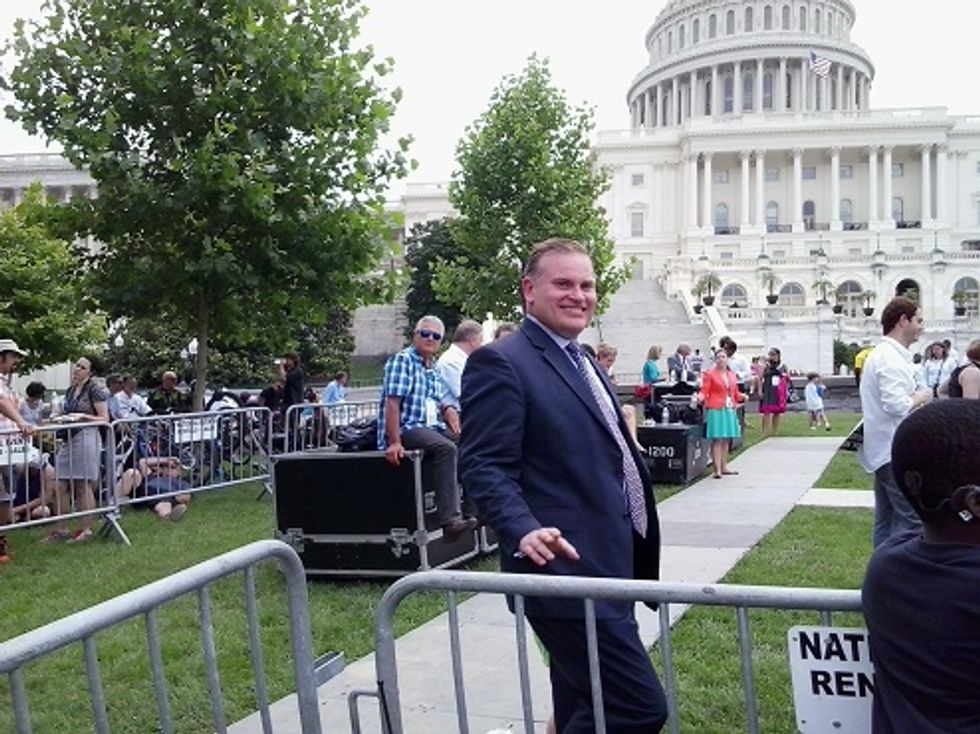 If you're having a party to advocate keeping the gays second-class citizens as long as possible and holding it in the very best swampy heat that Washington, DC has to offer, there are many things you need to ask yourself. In addition to questioning any number of your life choices, you must decide what to wear! And so Wonkette proudly presents the Sweaty Fundamentalist Summer Collection.

National Organization for Marriage President and Hate-Marcher in Chief Brian Brown, shown here sassing it up in the VIP corral, chose a navy suit, which is the traditional garb of his tribe (self-satisfied, irrationally homophobic twatfaces).

Mike Huckabee accessorized with an iPhone, preloaded with quotes from Dr. Martin Luther King, Jr. for egregious misuse in support of discrimination.

Among the depressingly numerous clergymen in attendance, basic black was, unfortunately, the color of the day...

...though these guys seemed to have thought ahead. Crisp and cool!

A faux-Colonial look is always in style, and in weather like this, you can fix a tasty brew just by letting your teabags dangle inside your breeches.

Of course, if you really want to make a statement without saying a word...

...you should dress as a sad parody of Captain America and bring a dangerously long pole with a flag that smacks small children in the face if they stand anywhere near you.

Also, the heat doesn't seem so bad if you're doing all your sweating inside a grotesquely distorted mask that vaguely resembles the President!

Defenders of straight marriage, you are inspirational fashion icons for us all.

That better not be a cotton-poly blend, mister, or you're going to hell.